End: This hike ends at Diana’s Baths, which is located on West Side Road, North Conway (you will see the sign for Diana’s Baths parking lot on the left hand side of the road).
North and South Moat are on the 52 with a View list (a list I'm not working on but you may be!).

Living just a two hour drive from the White Mountains allows for spur-of-the-moment-let's-get-out-there-and-hike days.  However, planning a group hike with busy friends still commands a plan-ahead strategy.  My friend, Eileen, planned a South-to-North Moats traverse for June. After several emails to invited parties, a date was decided on -  a month in advance.  The route, car spots, time, and meeting place all needed coordinating.  And, then there's the weather to consider!

Eileen is a fabulous hike leader. She copies maps of the routes, notifies her invitees of weather conditions and gives advice on gear and dress, organizes drivers, and the after-dinner celebration.  In the past, the weather gods have not smiled on her (she has the distinction of leading the hike voted "worst weather" in our group).

On this day, however, she has lucked out.  After a carspot at Diana's Baths, we got to the trailhead (just off of West Side Road in Conway) around 8:30 on a warm but misty morning.  There were 8 of us.  Within 30 minutes it started to pour - so much that we got out our pack covers and raincoats. But WAIT, it does get better, so keep reading..... 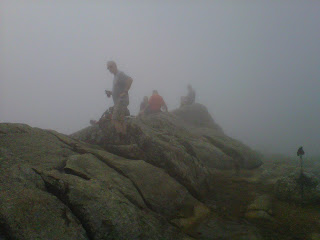 It seems as soon as we put the rain gear on, the rain tapered off and by the time we reached the summit of South Moat, billows of mist were breaking up and the blue sky was showing.

Shout out to Pioneer Valley Hiking Club in Western Mass, http://pioneervalleyhikingclub.org/ a group of enthusiastic hikers who leap-frogged us for the entire 9.2  miles.

We descended South Moat, into the wet forest and very soon after, summitted Middle Moat.  The top here was hard to determine, the rock slabs pitched up but there were several large ones in different areas of the summit that may have been the actual top.  At this point the weather breaks its mood and blue skies and warm temps reign!  We had some trouble finding the goldenrod colored blazes that lead us back into the woods toward North Moat.  We walked along the slabs toward North Moat, which we could see in the distance, and at the end of the rock slabs and height of land, we could see the trail on the left, down in the trees.

The trail from Middle Moat to North Moat was webby and had that narrow, overgrown unused characteristic.  It wasn't long before we found ourselves scrambling up to the top of North Moat a beautiful rocky top with 360° views. 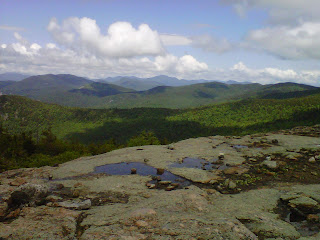 After a wonderful lunch and spirited chat with the Pio Valley Club, we headed down toward the car, which was miles away.  We thought the hard part was over. It was not.  The rock slabs were mossy and wet, the result of weeks of wet weather in the region. We all fell at some point and descending was slow.  This was especially true of North Moat toward Diana's Baths.

Add to the preoccupation with foot placement the horrific bugs who blanketed our exposed skin.  Eyes, ears, mouths - we were bloody and welted.  And nothing would discourage them.  They appeared to EAT the creams and lotions we applied and reapplied.  It wasn't until one of our Pio Valley friends doused us with a spray (that practically ate the hair off your arms) that we had any relief.

When the trail turned to dirt and roots and the grade mellowed, our spirits returned.  Diana's Baths were beautiful and a bit crowded for a mid-June day. We used the opportunity to wash the blood from our bodies, remnants of the more aggressive bug bites, and spent just a little time competing for the Nastiest Bug Bite award.  Then, a short walk to the car and off for an ice cold beer.

This beautiful scenic hike is a perfect day hike and training hike for the bigger peaks. Make no mistake, it is not an easy trek, but the views and Diana's Baths make it very rewarding and definitely a repeat hike in my book. There is a fair amount of rock scrambling and the many steep slabs make descending from either direction treacherous in wet conditions.

Posted by Peppersass at 4:20 PM

Email ThisBlogThis!Share to TwitterShare to FacebookShare to Pinterest
Labels: 52 with a View