Lesson learned: Snow does NOT make a good substitute for bathroom tissue.

I had no idea Parker Mountain existed until about a month ago when I saw my friend Wally's family photo with a vista in the background.  So I asked Wally where the photo was taken and found out about Parker.

Wally lives near Parker Mountain and his family hikes there often. In fact, Parker Mountain is known to be a local favorite for families, and is an especially good mountain for young children learning the joys of hiking.

I had not hiked in over a month and was itching to get out and start my winter hiking, such as it is. Despite my friends' efforts, I simply do not enjoy winter hiking like I do summer hiking.  Yes, I will agree that the lack of bugs is a plus, and not having to negotiate over endless rocks on New England trails does make for a smoother climb but it's just not my thing. Still, I make sure I get out and do a few 3ks during the snowy season. And a few 2ks and yes, even a 1.3k like Parker.

A little online research revealed that wreckage from a 1946 plane crash lay on the side of the mountain and can be found by bushwhacking into the woods about halfway up the trail.  We hoped to find the site, expecting we probably would not have time to get to the wreckage, only view it from the cliffs.   Luckily I was able to get the GPS coordinates from a geocaching blog I found.


We started late, about 12:30 when the day was at its warmest.  Being the end of December we watched our time and the daylight we had available, particularly ﻿if we wanted to find that wreckage.  The trail had red blazes but I did not see a one when heading up the summit as some of the blazes were simply red-orange spray painted on a tree, which I found hard to see with my sunglasses on.  The trail is wide and easy to follow, with an overabundance of pink and orange surveying tape on tree branches.

One inch of snow on the ground became 2 and then 3 as we ascended. About halfway up I saw a clearing and went to explore.  Piles of rocks were placed in a circle but with the snow covering it was hard to know more about what that place and its rocks signified.
Rich started playing with the plane coordinates on the GPS and was quite surprised to find we were less than 500' from the site.   We turned around and crossed the trail., heading into the woods.
The woods were open and Rich started counting down the footage to the site.  I was a little freaked out; I have been to old plane wrecks in the woods but none where passengers in the plane had died.  We got within 160' from the site when we reached a cliff.  We descended a bit more and strained our eyes to see any sign of the wreck among the snow and the brown leaves. Nothing.

We decided to abandon our search for the time being, and continue on our hike to the summit. We retraced our steps and lost them just about the time Rich realized he had not put a waypoint in the GPS where we left the trail.  We found the trail again but will make a point to stop and enter waypoints so we can find our way back out.  Snow covered woods can be especially disorienting.
﻿
A few minutes later we passed what looked like a stone foundation and stopped there to enjoy the view and talk with some hikers. Soon we reached the summit of Parker Mountain - a really big cairn!﻿

I had to go to the bathroom at the summit so I ducked behind a few trees and learned what should have been obvious: snow does not make good bathroom tissue.  Feeling wide awake :) we headed past the summit to a series of viewless slabs and ledges to a large ledge facing Bow Lake.﻿ 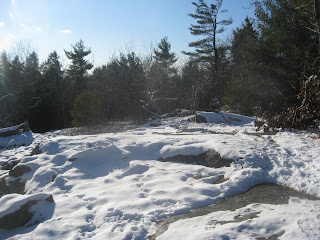 These ledges are quite popular.  A rock bench and firepit are located just above the overlook. The trail cut sharply to the right but Rich and I, looking at our time and the setting sun, turned around and headed back where we came.

We hiked past the viewless slabs, summit cairn and where we entered the woods to look for the wreckage and descended about 50 feet more before we once again tried to bushwhack to where the GPS indicated the wreckage was. This time the terrain was tougher than before and the farthest we dared go in wasn't as close to it as our first bushwhack.  We gave up, tabling that adventure for another day.

I would recommend this small peak for a nice half day snowshoe. It is about 35 minutes from our home and makes for diversion to the day.   Portsmouth, Bow Lake, Strafford and the ocean can be seen on a clear day.
Posted by Peppersass at 4:38 PM

Email ThisBlogThis!Share to TwitterShare to FacebookShare to Pinterest
Labels: Other fun hikes