Lesson learned:  You never know when a busy work week will catch up to you.


This is such a popular peak that it seems odd that it would be one of my final NH 4ks. Perhaps I saved it for later as it has such a fine reputation.


I hiked with Rich on this beautiful, warm day – blue skies in the high 70s.


It may have been because I had heard Garfield was a kid-friendly hike (how hard could it be?) or just my overall near-end-of-summer attitude, but I underestimated the amount of effort it would take me to reach the summit.


I was sucking wind as soon as we hit the trail (much of which is the old road used to access the fire tower that used to be on the summit).  Rich, who usually complains that I start out too fast, was way ahead and here I was reaching forward gasping, "wait, wait up."  I had had a rough week at work and no chance to catch up on sleep or relax, perhaps that's why.  Yes. That's it. I blame work.


All of my effort was rewarded when we reached the summit and its breathtaking view. The summit was crowded; there were also lots of bugs too.


The trip down was uneventful and this is definitely a hike I would do again, perhaps mid-week to avoid the crowds.

Posted by Peppersass at 7:01 AM No comments:

Trailhead:  The trailhead is located off Gale River Road - FR 92, in Twin Mountain; I-93 to US Route 3 to what is known as the "Five Corners." Take a right onto Gale River Trail Road. Trailhead is 1.3 miles on the left.

Hiked with Rich, Sandy and Joe. It was a beautiful day. In the parking lot we saw two of the hut crew getting ready to head up to Galehead Hut.  It was a hot day and they left a large box of strawberries on the top of their car's trunk. The heat would ruin the strawberries so I grabbed the fruit and carefully brought it up to the hut for them - only to find out later that they had left the strawberries for a friend who was right behind them and expecting to bring them up!

We got to the hut and picked out our beds (we were hiking the Bonds the next day) and then headed for the summit of Galehead, which is just a half-mile from the hut.  There is no view at the summit but a nice one at the hut. 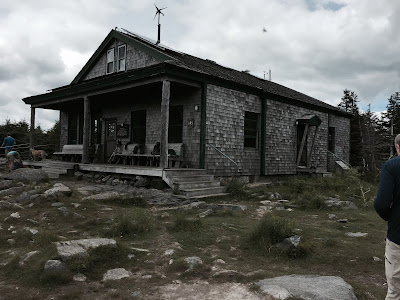 We spent two wonderful nights at the hut (see Bonds hike - #40-43) and then headed back down to the car. It was wonderful to wash up in the river! 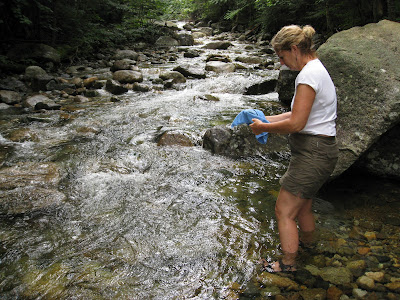 Posted by Peppersass at 7:00 AM No comments:

Mts. Flume (4,328') and  (4,459') via Osseo, Franconia Ridge and Liberty Springs Trails,
Mileage: 10.7 (point-to-point)
Elevation gain: 3800'
Trailhead: The hike begins at Lincoln Woods trailhead on the Kancamagus (Route 112), four miles east of I-93. There is a fee to park and restrooms are available. The hike ends at the Liberty Springs trailhead, off I-93 in Lincoln (take the exit for the Flume Visitor Center and it's .2 miles north of the Visitor Center on the right).
How fitting to plan a Mt. Liberty hike on the fourth of July!  Today I hiked with Rich, Sandy, Eileen, Art, David, Marie, Norm and his crew (Barb, Stacy, Barb and Peter).
Eileen had planned this hike the year before but the weather did not cooperate. We all eagerly awaited the rescheduling.
The forecast called for showers and thunderstorms which wound up being very accurate.  We spotted a car, leaving Sandy's car at the Liberty Springs trailhead for the return trip to Lincoln Woods trailhead parking area.
The Osseo trail is gradual and comfortable until the last third of it, where it steepens and there are switchbacks and stairs.  We hiked an hour or two under gray skies and then it started to rain (enough to put on jackets).


The rain stopped by the time we reached Franconia Ridge trail. 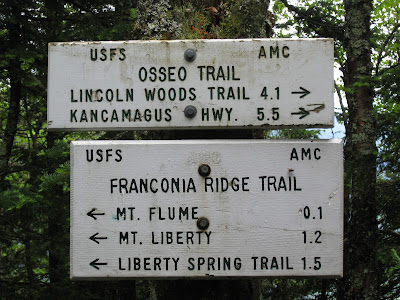 Here we stopped and had lunch.  As we were chatting, we heard thunder, closer than we'd expected - the storm was coming.  We gathered our stuff and pressed on; we had to reach the summit before the storm hit.

We hiked up a little nub, turned a corner and directly in front of us was a steep cliff of rock with an incredible drop off.


As dramatic as the scene was, we wasted no time sightseeing and quickly reached the summit, very rocky with scary cliff edges. ﻿


Luckily we were able to summit Mt. Flume before the storm came.  The view was spectacular, particularly with the dark thunderheads barreling toward us.
After a few quick photos, we descended into the woods and walked the ridge toward Mt. Liberty while the thunder and rain hammered the region (no lightning that we could see).


Just before the Mt. Libery summit, there's one steeply pitched area of rock slab (pitching outward) that was tricky negotiating.  I grabbed the upper lip of the slab and "crab-walked" to the end.

Liberty's summit is a series of huge rock slabs and another angry craggy cliff; not as pretty as Flume’s. To write that though is not really fair considering we were so socked in with fog from the storm that we could see no view, nor could we see the cliff's edge.
﻿


I found the USGS marker, took some pictures and headed toward the Liberty Spring trail.  As we descended the storm cleared and we could see magnificent views of the mountains with mist, clouds and more thunderheads.  Over to the North and South were patches of blue sky.
The Liberty Spring trail was a never ending journey, steep and uneven.  Rocks were slippery making the going very slow.  No one was at the campground by the time we got there, even the caretaker had left.
In spite of the thunderstorm, we figured we were no worse for wear on the trip, though a dry trail down would have made things more pleasant.  Our feet and legs were soaked.  But the rain had all but stopped so we took our jackets off about a half mile before the parking lot.
Toward the end of the hike when our sights were set on getting our wet boots off, the sky let go bringing a torrent of water upon our heads.  We were soaked and cold and that was the last straw.  We stopped fighting it and just accepted it. At this point everything was soaking wet so we didn't bother to put on our raincoats but we did pick up our pace.  When we got to Sandy's car we changed but not before totally drenching the inside of the car, fogging up the windows.
The Flume/Liberty hike was beautiful and a lot of fun and continues to have the distinction of being the "wettest hike ever."

Be sure to check out my solo Mt. Liberty trip report.
Posted by Peppersass at 6:58 AM No comments: