Trailhead: The trailhead is within Lafayette Campground off of Interstate 93 in Franconia, NH.


Lesson learned:  Leave your rings at home. Because this was a short, half-day hike, I did not follow my usual hiking routine and left my rings on.  There is some scrambling just at the top of Cannonball.

Since I had a meeting at Highland Center I convinced Rich to come take the ride up, with a promise that we would do a shorter hike once the meeting was over. It had rained the day before and as is typical to Franconia Notch the dark gray clouds still clung to the peaks.  I thought it unlikely we would get a view today but by noon the clouds were breaking up.

Lafayette Campground was crowded and parking availability sparse. We parked on the triangle near the campground entrance and by the time we headed out, others had decided that was a good idea.

The hike to the junction of Lonesome Lake was uneventful and filled with families and tourists trying to grab a bit of New Hampshire outdoors on their vacation.  We looked overdressed for that part of the hike and I wondered if they were thinking they had come across two crusty thru-hikers!  The volume of people thinned out considerably as we continued on the Lonesome Lake trail to the trail junction of the Kinsman Ridge trail.

So, heading up we took a left at the trail junction and after a moderate pitch, started climbing steeply. It was still wet and a little slippery so we took our time. There were some nice views on the way up. 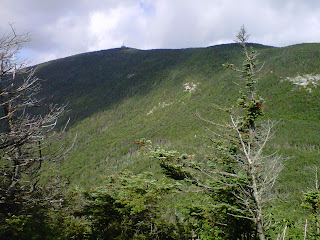 At what appeared to be the height of land, we saw the small clearing to the right - that is the unmarked summit (or as close as we could get to it, there were no side trails on this peak). Just to be sure, we hiked further (and saw a wonderful view of the Kinsmans)﻿ to where the trail steeply descended. The GPS beeped (finally) and we knew we were there.

When we were done we headed down and stopped at Lonesome Lake to get a good photo of the Cannonball. 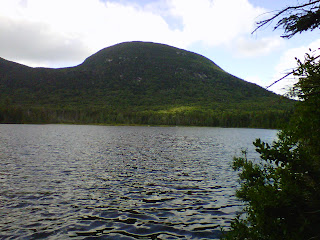 After dinner in Lincoln, we drove the Kangamagus Highway back to Route 16, hoping we'd see moose.  No moose but a beautiful sunset made the long ride worth it. 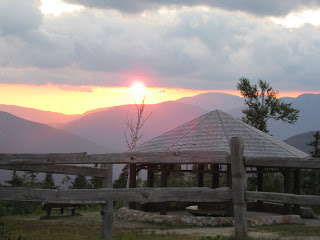