Trailhead:  Ski trail is located at Sugarloaf Ski Area, Route 26 in Stratton Maine. At the parking lot with the hotel to your left, look to your slight right and you will see the quad lift up on the hill.  Walk to the lift and facing the lift you will see the maintenance garage and the maintenance road on your right.  Follow the road up until just before it swings to the right, by the condominiums. Head straight off the road at that right curve, onto the ski runs. In front of you will be three areas separated by trees. Take the run to the left of the electric meter, to the right of the lift.  This is Tote Road ski trail

Lesson learned: 1. Hiking a road can be harder than is sounds.   2.Sugarloaf only has one place that sells beer before 4 p.m. - be prepared!

Planning the Mountain Mommas annual hiking trip for August starts in March.  There are nine of us and we like to stay together so accommodations are key.  The next task is coordinating the hike or hikes for that weekend.  Norm and I picked North and South Crocker as the Mommas big hike, and Sugarloaf Mountain as the Mommas shorter, easier hike, but this year it looked like both had similar mileage and elevation gain.

Sugarloaf has three routes to reach the summit: the AT via the Caribou Valley Road crossing (see previous post), the ski trails, and the Sugarloaf ski area maintenance road.  Maintenance road sounded fairly easy and figuring legs would be tired after the Crocker hike, we chose that as our route.  I checked with the group before solidifying my plans as 4 miles up and 4 miles back on a road does not sound like an interesting hike but the group was okay with those plans.

Just before our Mommas weekend, Charlie - a friend of Norm's, suggested we hike up the Tote Road Ski Trail to the summit instead as although it was steeper than the maintenance road (or so we thought) there were many wildflowers and guaranteed views of the Bigelows and Horns. In fact, a Maine AMC trip leader had taken his group that way to the Sugarloaf  summit (and then to Spaulding Mountain) the week before.  It sounded like the way to go so I decided to have the ski trail as our first choice of route.  I was also toying with the idea of hiking to Spaulding mountain from the Sugarloaf summit as they are usually done together and this is what Charlie and his group did.

On Friday, I was not sure if anyone was going to be hiking Sugarloaf the next day.  The idea of hiking ski trails or the maintenance road did not appeal to some in our group.   I did eventually convince the group to do the hike, however -  if for no other reason than a group picture for our 2011 hiking weekend!  I suggested we try the Tote Road ski run and if we didn't like it, we could hop on to the maintenance road.

Dave's hip was aching so he and Marie did not hike that day.  Eileen, Sue, Pam, Charlotte, Norm, Rich and I drove to the Sugarloaf parking lot (it was suggested that we park at the Chapel but I checked with the Sugarloaf office and they suggested the parking area just above the Chapel).


What can I say about the ski trail? If you have ever hiked a ski trail you know what it is like - a seemingly endless Stairmaster workout.  Fortunately, there was no high grass to speak of and we walked up some bare areas.  Holes and ditches on the ski run were often hidden and at times it was like walking through a freshly plowed field.


It didn't take long for the group to split into two, with Pam, Rich and I still hellbent on hiking the ski trail; the others hiking the maintenance road.  The plan was to meet at the summit for lunch.

Navigation was not as easy as we thought it would be.  Armed with the Sugarloaf ski trail map, we correctly chose our ski trail but never knew if we were right until after we hit a junction, turned around and looked at the signs.  It was worse for the road hikers. The maintenance road is not shown anywhere on the Sugarloaf ski trail map and several roads intersected the maintenance road.  The road hikers made one wrong turn and wound up at a dead end in the middle of the steeper trails. They backtracked back to the road and Charlotte convinced them to follow the road with the power lines (a good choice).  The maintenance road swings out around all ski trails before it turns left and heads up the summit.

Back to the Tote Road hikers - the only joy found on the ski trail, which had now become much steeper, was an occasional breeze and look back to the Bigelows.  The views in this region are awesome even from the parking lot and as we gained elevation, what we saw became even more spectacular. 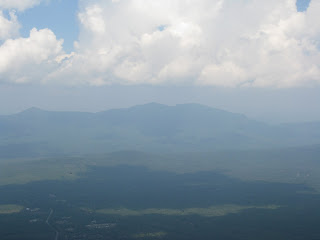 Within 2 hours we were at the top, greeted by a very tall cairn, long abandoned hexagon building (which was a restaurant at one time), and a huge cell tower.  The top was buggy and the cell tower area had broken bits of construction debris and plastic around it - not pretty.  The incredible view up there made the trip worth it - skies were getting dark however, and the road hikers had not yet arrived.

Our road hikers did arrive about 30 minutes laters, the wrong turn caused a delay.  After lunch we all headed down the maintenance road back to our cars.  This was much harder than anticipated as the road was very steep in spots and contained fairly large stones (uber-gravel) making the descent more like hiking down a mountain slide than a road.  Even a few rumbles of thunder could not quicken our pace on this stuff.


We got to the bottom without getting rained on, and headed for the only place in the area that sold draft beer before 4 p.m. - the country club!  Norm and Charlotte arrived in style! 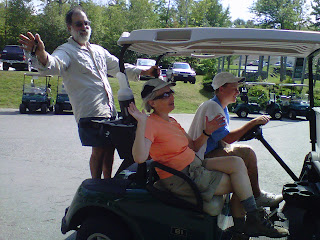 When we checked the GPS, we were surprised to find our hike down the maintenance road was not 4 miles long as indicated in the AMC Maine book, but between 2 and 3 miles. Total miles RT 5ish, elevation gain 2500' with the GPS graph showing our trip up the slopes and down the road mirror images of each other!  That was one steep maintenance Road!
In the end, not hiking on to Spaulding mountain proved a wise choice. We wound up being just ahead of a thunderstorm on our descent from Sugarloaf, and the uber-gravel of the maintenance road or the perpetual steep of the ski trails would have not made for a pleasant end-of-long-hike descent.  Spaulding is on my list for next year! 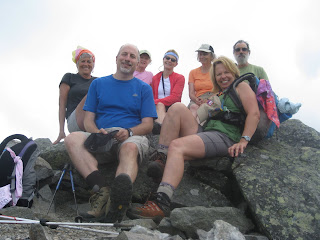 Posted by Peppersass at 3:53 PM No comments: