Lesson learned:  Microspikes with big balls of snow stuck to them are not effective!

It was tempting to write something like "Oy Vey, Mt. Israel" or יפה ההר which is Hebrew for "beautiful mountain" (cut and pasted that from Google), or some other clever play on Mt. Israel's name but it was discouraged by my critics. I must confess I have no idea how Mt. Israel got its name (though I did try Wikipedia and Google to find out).

The plan was to hike Sandwich Dome today but our friend Sandy asked that we save that one until fall when she and Joe can hike it with us.  Mt. Israel is on the "52 with a View" list as the summit has some of the finest views of the southern White Mountains.

Research was tough on this hike as trip reports warned that Sandwich Notch Road is closed in the winter. There were tales of parking one place and having to walk a distance to the trailhead, but details were sketchy. After some checking I found a report on newenglandtrailconditions.com that talked of a partially plowed parking at Mead Wilderness Base Camp.  I decided we would start there.

Our Garmin Nuvi took us down a few unmaintained roads before we finally followed the directions we got from another hiking report.  It had just snowed the night before, and it was still snowing when we made our way down the slippery Diamond Ledge Road toward the Mead Camp (Conservation Center).

We decided to wear our microspikes and take our snowshoes.  There seemed to be about 4 inches of new snow at the trailhead and we wanted to be prepared. 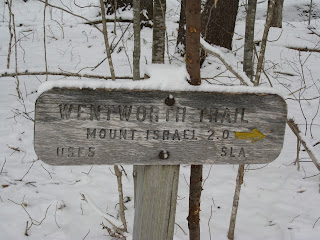 The entire trail can be described as moderate. The first mile is on an old carriage road, and at one point you pass through an old stone wall and turn right to parallel a small brook.  Elevation gain is gradual, with several switchbacks before the "false summit,"  There are no large boulders to negotiate or steep pitches to haul up.

I can't really say we broke trail. It was clear that a broken path existed under fresh snow and blazes were plentiful in the beginning (we had to watch for them as we got toward the summit).


My snowshoes were securely strapped on the back of my pack; they were sitting a little high. The higher we climbed, the lower the snow laden branches were. After the third time of getting dumped on when my snowshoes hit a branch as I went by (piles of snow falling directly into the hood of my jacket, and then sneaking into the back of my bare neck), I made Rich go first.  There was one substantial blowdown close to the top which our snowshoes got caught on when we skooched under it.

After a few switchbacks, we hit what has been called the false summit in some trip reports. To me it looked more like a field of random spruce. Trip reports indicate this to be a place to easily get tripped up as blazes were few (most likely they are on rock slabs under the snow).  Though the fresh snow was thick, it wasn't hard to figure out where the broken path was.  Several times we wandered off the path and postholed.


The spruce area was beautiful and the snow had given way to clearing and blue skies.  We were at the true summit in no time, open to beautiful views with not a lick of wind!


Took a few photos and enjoyed our lunch. The sun came out and warmed us but my hands were getting cold so we decided to head back. 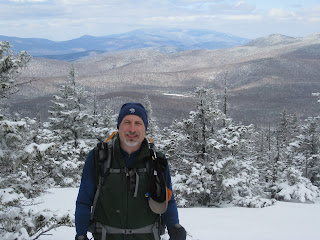 We met a group of hikers coming up, the first we had seen all day.  The sun was warming up the snow and almost immediately our microspikes were gathering wet clumps of snow, some the size of softballs.  Our traction had become a problem, certainly not helping us stay on the path.  We kept kicking our boots on tree trunks to loosen the snow, which loosened the snow on the branches above (smart move!).  Eventually, Rich removed his. I didn't have to - one of mine stuck to a pile of snow and flew off into the path.  Too lazy to take the other one off, I walked the rest of the way with only one.

When we got to the car I convinced a tired Rich to make the trek to Beede Falls (I wanted more log more distance today).  The  Bearcamp River Trail starts behind the parking area, goes down a road and then turns left over a brook and into the woods. 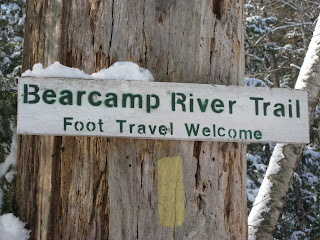 The trail was flat with a few icy spots. Not wearing our microspikes, we carefully made our way past those areas.  We starting hearing rushing water.  About a half mile in we were treated to a beautiful falls, short and wide.  We took a few photos and headed back (UNH hockey was on at 4).


This peaceful hike took under four hours, including the many stops to adjust gear and peel off layers.  It is minimal effort for significant reward and a favorite of the locals. I would highly recommend this as a winter hike and I am certain it makes a nice short summer trek as well.

On a separate note, congratulations to Randy Pierce and Quinn for completing the NH 48 in one winter, an impressive feat.  His 48th peak was bagged today: Cannon Mountain.

I met Randy two years ago in my Wilderness First Aid class. At first I wondered who the cool guy was sitting in the classroom wearing sunglasses.  He was so confident.  We were all amazed that he planned to hike the NH 48 and after the class we followed his adventures on his website, rooting for him and his amazing dog.

I think those of us who hike take Randy's accomplishment personally as we do for all who reach their goals, bag their peaks.  For me, it's not as much about meeting the challenge as it is about losing the excuses.  Hats off to him; I hope to meet him again someday soon (WFA training is only good for two years, after all!).