Trailhead: Drive 1.7ish miles on Haystack Road off of Route 3 in Bethlehem, NH; you will see a logging road with three boulders on your right (see photo below).

Lessons learned: 1. Gaiters can only take so much. 2. Don't underestimate the amount of actual whacking you may have to do. 3. Don't overestimate your compass orienting skills. 4. When off the herd path retrace your steps.

Bushwhacking 101.  For over a year I knew Peak Above the Nubble (PAtN) would be my first significant bushwhack.  New England's Hundred Highest List has three peaks in New Hampshire that require bushwhacking* and from my research, it seemed that PAtN would be the best choice for a first bushwhack (Merriam Webster defines bushwhack as to "cut or push one's way in a specified direction through dense vegetation").

I researched the hell out of this hike, viewed websites and trip reports, and also wrote to the authors for details (and even got a GPS track of a previous trip).  In April I scouted out the trailhead and part of the logging road route in an effort to demystify the challenge.

We had planned to hike the Osceolas with Sandy and Joe. Sandy wound up working and they had to cancel.  The weekend's weather prediction was "spectacular" and so our "Plan B" quickly became PAtN.

What extra stuff a hiker needs to bring for their first bushwhacking experience.
I thought Rich would balk at the idea of a bushwhack (he is not working on the Hundred Highest list) but he seemed up for the challenge. We got to the trailhead at 9:30 and headed down the logging road.

Vegetation had really grown since my re-con in April; I was thankful I'd made the earlier trip to check out where to start.  We went about 3/10 of a mile down the road and at the sand hill we went right at the fork. (We'd used this sand hill as a visual to find our way back to the road and the car.)

About 500' after bearing right we took a skidder road, well hidden in vegetation, that went up hill to the "overgrown clear cut."  Here, if you step back you will see Nubble in front of you, beyond the clear cut.  That is where you are headed.  You'll also see a tall dead tree with lots of woodpecker holes in it to your right.

Here is where I made our first mistake. I grossly underestimated the amount of vegetation in this area, having read descriptions as "clear cut" and not "overgrown clear cut."  Instructions from a friend indicated we follow the left edge of this clear cut to the woods and go up.  It was like being in a corn field in August; we could not see where we needed to be. Immediately we started bulling through the thick vegetation. Our poles caught on everything and were a huge annoyance.

Pushing through vegetation this thick is what bushwhacking is all about right?  No, not right, the smart thing would have been to find a less thick area of the clear cut and get to our destination.  We expended a huge amount of energy getting through this area (not even a mile into the hike). At one point I felt a tug on my pack and as I yanked myself through it, my Camelback mouthpiece popped off and my water started pouring onto the ground.

Dealing with the distraction and frustration of the thick vegetation at the clear cut, I forgot my friend's advice to stay to the left of the clear cut and start the ascent from the left side.  Once we got through the clear cut we immediately headed up into the woods, thrilled that the heavy stuff was over but we would soon find out we weren't "left" enough.  The wooded area is fairly open with saplings, hardwoods and lots of debris to hop over but we could at least see where we were going.

Then we saw it.

A HERD PATH!  Great!  We jumped on it and headed up with total abandon, ignoring what we knew and the route on the GPS track.  We got to the top of a ridge that wound up being too far right. Second mistake!  We had to hike down and then up to correct our error, avoiding small cliffs and boulders to get where we need to be.   This cut about 35 minutes into our time and we were both annoyed, particularly when trying to whack through a spruce trap.

Navigating in the woods is taxing.  A thought kept creeping in, "we are in the woods, gotta get back on trail." There is no trail. As the hill steepened we were forever placing our foot on iffy ground, trying to guess where the rotting fallen trees are hidden.  My stiff, reliable gaiters were falling down, baring my calves, which the bugs loved.  In fact, several bugs found their way in and just kept biting and biting.

After a while we reached an area described in other reports as "open hardwoods."  There was a lot of moose scat (lots).  Herd paths came and went and we kept heading up (we started calling our herd path sitings mirages because they appeared to be there, then weren't). I wondered if we would ever see that canister at the summit.  Eventually there was a discernible herd path and we followed it, checking the GPS track we had borrowed to at least stay close to where others had trekked (no more wrong turns for us).

Just before the summit of Nubble, we came across a left hand trail that led to nowhere; it seemed to disappear down a cliff.  I had read about this trail in reports.  We went right and the herd path led us to the top of Nubble.  It doesn't have a view and at this point we have not seen any views so we determined that we missed a much easier, more pleasant way to this peak by heading into the woods too far to the right.

After lunch, we felt renewed and headed on the herd path to Peak Above the Nubble.  Along the way we did have one nice viewpoint and we had no problem following this path to what?  The CANISTER, that's what!

After signing the register, then taking photos of each other with great views of North Twin in the background, we headed down the herd path back to Nubble. Here is where our poles came in handy, as the area was steep and rooty. There were several gnarly blowdowns we had to navigate around on the way up. These turned out to be a big problem on the way down. 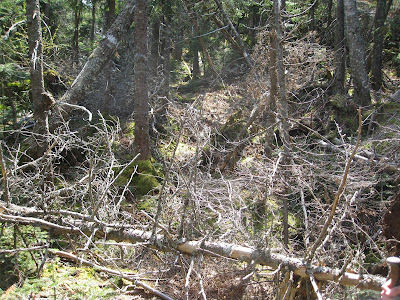 As we skirted around the last blowdown we lost the path and headed down another (or maybe it was a "path mirage").  Once we realized our mistake, we tried to cut into the thick, littered woods to pick up the path but found this to be just a waste of time.  After accepting that we had lost the path, we were able to retrace our steps and find it.  Another 25 minutes wasted.

We were past Nubble and down to the end of the path in no time.  The GPS was constantly checked to make sure we were close to the track.  We were. We avoided the spruce trap this time, and stepped over all the moose poop, thanking the moose for clearing a lot of the way for us in their travels.  We hit the lower section of the woods (2500') and descended through younger trees, following a small stream part of the way, closely following the GPS.  Just when we were decided we were so over! picking our way through fallen, rotten logs, the clear cut appeared directly in front of us. At the high end of the clear cut there are beautiful views of Waumbek and the northern peaks.  And, we could see the sand hill in the distance - the logging road where our car was.

This time, we were smart and quickly found our way through the smaller tree growth, following a stream along the way, keeping the tall trees and that one tall dead tree in our sites. This led us to the skidder road back to the sand hill, and to our car.


We picked up a few hikers needing a lift back to Gale River Road and took their advice for dinner:  Woodstock Inn and Brewery in North Woodstock.  We earned our beer on this hike and were amazed the whole experience yielded just 4.6 miles!

Casualties - Be prepared to sport some war wounds from bushwhacking. Bug bites aside, I hit my head on edgy, broken off branches five times (once hard enough to bleed), smacked my shins countless times (big egg on my left one), received no less than a dozen scratches, and Rich has a small puncture wound on his left arm.  Our clothing is in rough shape too, with pulls and small tears.

Final note:  We relied heavily on the GPS and the track we borrowed from a previous hiker.  If you choose to borrow a track, check the date of the track; winter hiking routes have an advantage with regards to vegetation. More importantly, don't rely on this method of orienting without a back up plan.  Many times, Rich had me look at my compass to determine which way to go -  once the GPS wanted us to go left when we clearly were not to go that way.

Final final note. We made some amateur mistakes on this hike that made the trip about 90 minutes longer than it had to be. Next time we will be smarter.  Rich was clearly the day's hero with his GPS navigation and frankly we were glad to have this helpful tool.  But, regardless of our time and our mistakes, another NEHH hike was bagged .

Rich said would do it again, but only if it was someone's dying wish......

* the other two bushwhack peaks are Vose Spur and Scar Ridge
Posted by Peppersass at 6:31 AM