Trailhead: Appalachian trail road crossing on Route 26  - Grafton Notch State Park (Newry, ME). From the intersection of US Route 2 and ME Route 26 in Newry, follow ME Route 26 approximately 12 miles north to where the Appalachian Trail crosses the road. Coming from US Route 2, the trailhead and parking area will be on the left.

Lesson learned:  There is a reason why an 8 mile hike has a book time of over 6 hours!

East Baldpate is on the New England Hundred Highest list (one of my lists).  Today I hiked with Sandy and Jen. It's been a while since we hiked with Jen and we were excited to be spending time with her.

The trip to Grafton Notch State Park took about two hours and twenty minutes, which I've decided is about the driving time limit for a day hike (double that for the trip back and it's a lot of hours in the car).  We left Stratham around 6:30 arriving at the trailhead at 8:50.

We put on our boots and packs and headed to the kiosk, turning right on the AT (left would take us up Old Speck - see NE 4k report September 3, 2011).  We crossed the road and passed the AT sign, but not without seizing a photo opportunity.

AMC's Maine Mountain Guide had a book time of over 6 hours for this 8 mile hike. We thought we'd have no problem doing it in 5 and contemplated heading up the Table Rock trail (which joins the AT about .9 miles up the trail) to explore the caves but figured we could do that on the way down if we had time.

We didn't have time.

With rest stops and lunch (and chatting with other hikers) this trip took us over 6 hours - about 15 minutes longer than the book time we scoffed at before we got on the trail.

Many bog walks were constructed at the beginning of the trail. It was clear the MATC trail crew takes very good care of this stretch of the AT. Erosion is a problem, though.

We ascended gently, crossing several streams. Trail conditions were much drier than anticipated. I'd been checking the weather reports for the week (after days of steady heavy rains) and saw that the Bethel area had cleared up mid-week. Hiking on Sunday instead of Saturday allowed for one more day of dry weather and drier conditions - a good call.   The several muddy areas were easily avoided.

After 20 minutes of a moderate climb, the trail leveled out -  even dipped in a few places.  We met Gadget and Hikerbiker, two section hikers from New Jersey.  This was their second attempt at this stretch; weather kept them from finishing the last time.  Hikerbiker has one section left to hike (which includes Katahdin) to finish.

After the nice mellow section of flat, we were met with rock steps - lots of them.  They were well placed but steep and never ending, even continuing as switchbacks.


At the Baldpate Lean-to the MATC trail crew was working on a section of trail. The rocks were frosted with mud.  We saw this same "frosting" about 1/4 mile up the trail. There was one area above the Lean-to that was very damp and mossy but the rocks on this trail were sticky for the most part and we didn't worry about slipping even on the wet ones.


West Baldpate was uneventful, not even a sign and no view but lots of hungry bugs. We avoided bug repellent up to this point but abandoned that as soon as they attacked us.

A few yards north we saw our real prize: the summit of East Baldpate.

Down we went, the descent steep at times; there are two ladders on the steeper areas.
A small col with bog walks got us to the rock slabs, a bit steep in places. Cairns pointed the way.

We were happy to finally reach the summit and have lunch. 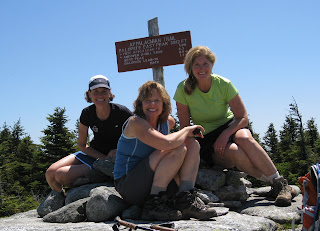 On a clear day like this the views are spectacular, with wind farms to the north and west.  A breeze kept the bugs away and we spent some time trying to name the peaks. 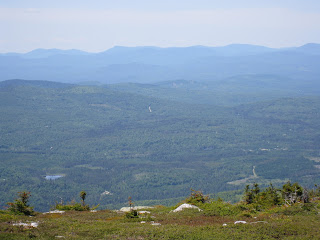 It was getting late and we had to get back so we flew down the trail and back to the car.
We changed our clothes at the car (trading our boots for sandals) and headed home, amazed at how long it took us to bag this peak..

This was a lovely hike that offered more challenge than most 8 mile hikes with its steep stairs and rock slabs.  This area is particularly fun in August as thru-hikers are plentiful!

Comparing our route to a prior GPS route, it is evident that part of the AT had been rerouted, which would explain the change in mileage on the most recent AMC map, increasing the RT mileage to 8 miles from 7.6 miles.
Posted by Peppersass at 7:27 PM