Success Pond Road from Berlin is bumpy but doable for any passenger vehicle. There are two torn culvert pipes on the right side in the road in the first mile or so from Hutchins Street that must be avoided (which is easy as the road is fairly wide). Trailhead parking lot is approximately 8.1 miles from the Hutchins Street turnoff on the right; there's a sign. At one intersection there's a sign ahead on the left "Mile Marker 5," which will keep you going in the right direction. This is an active logging road, watch out for trucks.

Lesson learned: I think the Mahoosuc range is my new favorite!

This hike had everything one could possibly want in a day hike (well, except maybe a pond).

Hiked with Rich, Gary and members of the AMC Boston Chapter.  Back in March I saw this hike on the AMC website and since Goose Eye is on the New England Hundred Highest list (a list I am working on), I figured it would be fun to hike with a group.  My friend Gary was easily talked into it (he usually hikes alone) and Rich as well.

Group hiking allows for camaraderie, social interaction and teamwork.  It can be unpredictable too, which is often the case with posted events. AMC leaders screen group members prior to accepting them on the trip to be certain of ability and fitness level necessary to complete the hike, and to try to match abilities within the group so everyone will have a good experience.  Still, the larger the group the more uncertainly as to how everyone will do on a hike (and the Mahoosucs are known for their rugged terrain).

We reserved a room at Joe Dodge Lodge (AMC lodging at Pinkham) for the night so we could meet the group at an early hour.  To accommodate those who travel from Boston, the leaders posted a later meeting time: 9:15 in Gorham, NH. Once the group was assembled we were to caravan to the trailhead at Success Pond Road in Berlin (a 30 minute drive, going slower the last 8.1 miles).

Thunderstorms were predicted starting around noon and I was concerned about the late start of the hike and unknown pace of the group.  We considered breaking from the group and going earlier on our own but once we met Surya we decided to stay on the group hike.

We got to the trailhead without incident and started our hike at 10:15 (not too bad for an eight mile hike).  AMC leaders on this trip were Bob and Surya. Members of the hiking group were Samantha, Rachel, Kat, Pai, Rich, Gary and me.

We started hiking up the logging road and within five minutes turned left onto Goose Eye trail, heading down toward the first water crossing. Blue blazes appear often on Goose Eye and Carlo Col trails. 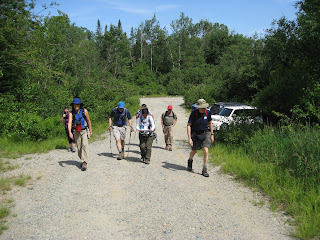 There are a bunch of easy water crossings on both Goose Eye and Carlo Col trails. 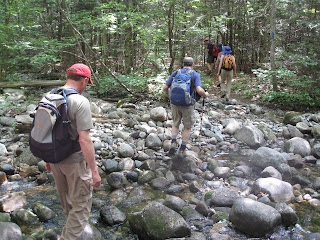 The path is generally flat with decent footing.  We came out on another logging road, went left and traveled for a short distance before ducking back into the woods on the right side of the road.
The trail had a few muddy spots but was otherwise dry. It hadn't rained the night before where we stayed (Pinkham) and this region may have escaped the storms as well.

We started heading up, moderate to steeper grades. It was hot and humid and we all got a good workout. We took a break here and there but they were short ones for the most part as we continued our chug upward.

I was a little apprehensive about the scramble at the top. Normally I wouldn't be but the week before I had a tough time getting up The Horn's big summit rock and started questioning my ability to do any serious scrambling.

When we got to the scramble it did look daunting at first but had good foot and hand holds.  No problem.


As we were making our way to the top, our backs were to the most magnificent of views (yes, people still use the word "magnificent").  We arrived at the summit,  took a few photos and sat down to eat lunch.

I heard several rolls of thunder in the not-so-distance.  Just over our shoulders was a black mass of cloud heading toward us.  I suggested we consider going back down.  The group decided to press on instead, hoping the weather would hold off long enough to hike the exposed col and get down from any ledge or slab before rain and lightning was upon us.  I had my doubts; I'd been caught in storms before.

Lunch was cut short.  We started out, quickening our pace as we jumped on the AT.

Immediately we were at the tall ladder that leads down vertical slab.

The vertical terrain continues but with good footing and a series of staples (metal rungs) down a particularly daunting drop.

The thunder stopped but we could see the storm was moving in our direction. Still, we had blue skies directly above and this portion of the hike went in and out of the woods so I began to feel less threatened by the impending weather.

The group was "tightly dispersed" with the leaders at opposite ends.  There was a bit of a slinky situation on the hike up to Goose Eye (faster hikers eager to continue once the group is reunited) but on the way to Mt. Carlo we hiked as a group.

In and out of the woods we went (views still magnificent) and eventually we stayed in the woods descending and then ascending with the help of steps chiseled in the rock slabs.

Eventually we arrived at the clearing - the summit of Mt. Carlo. By this time the weather had arrived (somewhat); a mist tumbling past Goose Eye and onto Mt. Carlo. 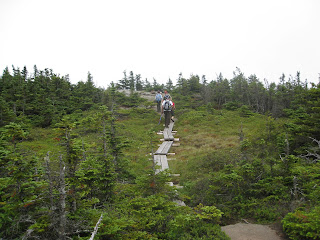 We started our descent and soon came to a trail junction. We headed down the Carlo Col trail which had a lot of mossy and muddy spots. 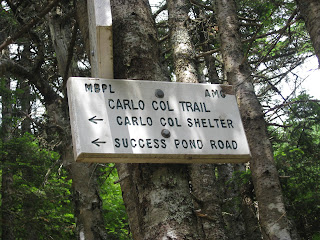 On the way down I peaked into the Carlo Col shelter, well built with a roomy loft. We met two hikers headed here for the night, the only people we saw on the trail. 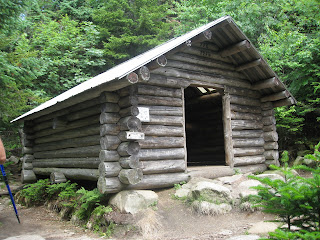 Just below the shelter the trail runs through a brook with mossy round rocks and wet terrain. Thankfully this uneven footing did not last long and the trail went back to dry with good footing for the remainder of the trip.

It appeared that threat of storm had left us; we could see blue skies above the trees. A breeze kept the bugs at bay as we chatted our way down the trail. A bunch of small water crossings later, we emerged from the woods into tall grass.

The Carlo Col trail spilled us onto the logging road where we started (note: if doing this hike counter-clockwise, go left of the fork in the log road as you head to Carlo Col trail).

The road is adorned with many beautiful wildflowers and there was some discussion as to whether or not the red-orange flowers are called Devil's paintbrush. 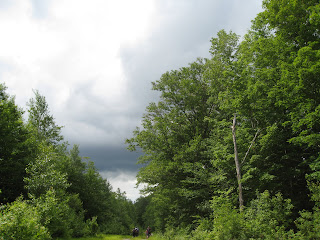 As we passed the entrance to the Goose Eye trail, thunder clouds appeared directly above us.

The rain fell in big splashy drops just as we were unlocking our car doors.  I am still amazed we were able to hike over three hours with the bad weather so close to us with no consequence until our drive back home.

The group had dinner together in Gorham.  It was a great group to hike with.

When hiking alone we prepare, plan and make key decisions for ourselves based on time, ability and safety (weather especially).  Hiking in a large group calls for consensus and the leaders make the tough decisions. The decision to continue on an exposed trail with thunderheads coming toward us was a tough one but in this case it was the right decision.  There are wooded areas on top in which to duck into should bad weather occur and on this day the rain held off until we were back at the cars.

This hike had everything a day hiker could wish for.  The weather was spectacular, warm enough to bring a good sweat, breezy on the way down.  A gradual trail that steadily increases in steepness. A fun exposed scramble at the top.  Breathtaking views with stormy weather off in the distance heading our way, making for a thrilling trek on a partly exposed col.  Many steep areas, a tall ladder and staples for descending vertical slab.  No bugs for a good part of the trip.  A clear summit (Goose Eye) and a socked in summit (Carlo), a gentle breeze on the descent, a cool shelter, lots of brooks and wildflowers at the end.  Berlin is far away from points south but this hike is worth the extra 45 minutes north it takes to get here.
Posted by Peppersass at 9:30 AM