Lesson learned: I should have done a better job securing my favorite bandanna to my pack!

The Belknap Range consists of twelve fun peaks located in the Alton Bay region of New Hampshire. There are so many benefits to hiking these mountains: they are close by, the views are spectacular, and each mountain has well marked trails.  Thanks to the Boy Scout camp, hikers can earn a patch by hiking all the peaks.  For more information on earning the patch, visit: www.belknapsportsmensclub.com/hiking.php.

Once again we had a lazy morning and fully intended to hang around recovering from New Years Eve.  But the day was exquisite with temperatures in the 50s, blue sky, no wind. We HAD to get out.  We got our act together and headed to the Mt. Major trailhead in Alton Bay, NH.  I had my full pack (overkill for such a small hike but easy to grab when in a hurry).  I checked that I had microspikes, fastened my bandanna to my pack, grabbed my map and headed to the car.

We got to the trailhead parking lot at 1:10, late by any standard particularly since the sun was scheduled to set at 4:39 that day. The lot was full.  Boulder loop trail is on the left side at the end of the parking lot, Mt Major and Brook trails on the right. We went left, crossed a recently replaced plank bridge and headed up the trail, which was well marked with orange blazes. We barely broke a sweat as we headed up a gradual slope.

﻿﻿
It wasn't long before we were meeting others coming down from the top.  It's fun asking people how it was at the summit and hearing them rave of the views, and rightfully so.  Mt. Major is the biggest bang for the effort in the lakes region, with less than an hour of hiking offering a most breathtaking view of the lakes and the mountains.

Ice was making an appearance, but most of the trail had some spots with good footing. Bushwacking was evident, particularly in the icy and muddy areas.  Follow the frequent blazes and you will stay on the trail. 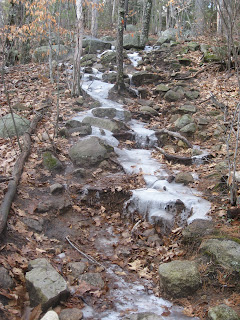 As we got to the boulders, we noticed the ice had all but disappeared and quickly scrambled up to the ridge.
A ridge sign indicates .1 miles to the summit and we "slab hopped" past views of Lake Winnipesaukee﻿﻿﻿﻿﻿ to the summit's rock foundation. The hike up took us about 50 minutes.
The view was fairly clear, though the White Mountains were hidden in clouds.  We met several hikers still in the New Years celebratory mood.

Daylight was waning and we started back, hiking the ridge on the Mt. Major/Brook trail - a hybrid of sorts, defined by a blue and yellow blaze.

The trail follows the ridge, away from the parking lot and just when you think you may have missed the Brook trail junction, a sign points you right and down the mountain (so long as your blazes are blue and yellow, you're heading in the right direction).

The descent was icy but not quite icy enough for us to stop and put on our microspikes.  We met a hiker on the way down who slipped several times but without injury. We took it slow.  The Brook trail is a predictable gradual descent toward the parking lot.  There are no views though there is a nice brook following the lower portion of the trail. Yellow blazes are frequent and the trek is simply a nice walk in the woods. We were at our car well before sundown but not without a casualty: I lost my favorite hiking bandanna.  Apparently it pulled free when scrambling up the boulders. I was heartbroken!

﻿﻿﻿﻿﻿﻿﻿I dedicate this entry to my "hiker chick" hiking bandanna, given to me by my good friend, Eileen after hiking Katahdin in 2006.  She sent it to me in the mail, along with a note indicating that I was now an official hiker chick. I was so excited!
﻿
FOOTNOTE: Years ago we hiked Mt. Major on Columbus Day - a cold one that year.  On the summit we met a Revolutionary War soldier who told us of his frequent treks up Mt. Major.  We descended via the Mt. Major trail and got disoriented on the trail's slabs.  In the distance, we saw the soldier pointing us in the right direction. We were soon back on the trail and when we looked up to thank the soldier, he was gone. We never saw him again.  We did however, get a photo of him at the summit.

Posted by Peppersass at 9:21 AM No comments: