Trailhead: This hike intercepts the AT where it crosses Caribou Valley Road (CVR - also called the Caribou Pond Road) in Carrabassett Valley, Maine.  CVR is off Route 27 near Stratton, Maine just past (or before depending on your direction) the Sugarloaf/USA Ski Area access road (on the same side). The road is not well marked. Park at the barriers and proceed over the bridge .5 miles by foot down the road to the AT crossing.  The hike ends at the AT parking lot on Route 27 several miles before the town of Stratton (well marked).  CVR road condition update June 2016 - with the exception of one rough bridge, the CVR is in okay shape, with just a few ruts and several bumpy culverts.  The bridge is sturdy but with many 6-pack size holes in it.  It's best to get out and look at it closely before driving over it. When driving in we stayed to the left. (A Prius and Lexus sedan were parked at the end so you don't necessarily need a vehicle with high clearance.)

This was the weekend of the Mountain Mommas annual hike.  Nine of us stayed at a ski house near the Sugarloaf Resort.  Only three of us opted to hike the Crockers, which turned out to be a lovely hike through sweet, sunny woods with areas of dramatic vistas.

We arrived at the Stratton Motel (AT hiker accommodations) about 6:50 a.m. and followed the shuttle to the Route 27 AT crossing where we left our car.  After parking, we got in and rode to the CVR trailhead.   Since this hike is a traverse from one AT road crossing to the next, taking the shuttle eliminated the need for a second car.

But the real reason we took the shuttle was the condition of the Caribou Valley Road.

An old logging road, the CVR is falling into disrepair, particularly the culverts and bridges. I imagine hikers would have had to backpack to bag these peaks prior to the building of this road.

The day before this hike, we found the road (which is 1.6 miles from the Route 27 AT crossing) and tried to see how far we could take our Highlander (4 WD but without the high clearance and skid plates).  We got 2.5 miles in; the AT crossing is several miles beyond that.  Rocks, ruts and half fallen in bridges kept us from going any further.  Sue from the Stratton Motel drives that road many times each week and her Land Rover was able to negotiate the terrain much better, even over the grate bridge but she stopped before the next wooden bridge, .2 miles before the AT (Note - the grate bridge has been blocked off, park there).   The AT is not hard to find if you are looking for it and soon we saw the subtle break in the trees along the road and the familiar well-worn path and white blazes.


Grade is moderate for the first mile, then steepens during the second mile. We passed the sign for the Crocker Cirque campsite and after a few steep areas, emerged from the woods into the open with a slide in front of us.  No scrambling necessary, footing is pretty good going up the slide, it was fun and the view of the Bigelow Range is lovely. Saw a cairn and small path heading down just before the slide. Not sure where it went.

Soon after, we arrived at another small slide (and views) - this time we simply crossed it. When we reached sign for South Crocker we headed to the side trail to the summit, which has a spectacular view of Sugarloaf Mountain. Because of the large cell tower on Sugarloaf, we had cell coverage and I proceeded to send my friend Sandy a photo of the three of us on the summit of South Crocker.  After a bit of poking around, I found the herdpath to Mt. Redington but decided early on that I would take a different route to the summit of that peak, through a series of more old logging roads further down on the CVR.  That was for another day (and another year -see report). 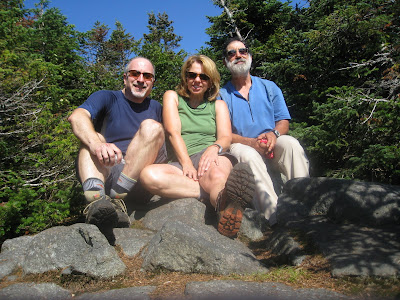 After a few photos, we headed toward North Crocker, a dip and subsequent climb of about 300' - there we had lunch and met two young thru-hikers headed down toward the campground where they were staying.

The hike down was longer than the hike up. It took 3 miles to get from the CVR AT crossing to North Crocker, and just over 5 miles to get from there to our car at the Route 27 AT crossing.  After a few initial steep areas (and more great views), the route became a moderate descent, almost gentle, with sunlight playing off the leaves and moss. It was quiet and pleasant with muddy spots here and there.

Total hike time was under 6 hours for about 8 miles (2300' total gain).  It would have taken less time if not for our chats with northbound thru-hikers excited about Katahdin and their last 200 miles.  We picked up a thru-hiker hitching into town on our way back to the house.

North and South Crocker are two of the New England 4ks, making numbers 55 and 56 of the 67 needed.  I woke up at 3 a.m. the next morning with the Maine 4k peaks swimming in my head.  Later in the day I would bag Sugarloaf Mountain (see report) but Redington and Spaulding mountains were on my mind (see Spaulding report).  Redington does not have an official trail, one of only two NE 4ks that can make that claim (Owlshead in New Hampshire is the other one).  The Caribou Valley Road, which leads to a series of old logging roads to the top of Redington, is certainly on its way to being reclaimed by the forest. Will I find the way to the top of this remote peak?  And Spaulding Mountain whose route typically starts on the Caribou Valley Road is usually done in conjunction with Sugarloaf Mountain. Should I be combining these two?  My Sugarloaf hike that day would provide some insight on my hiking plans for my next Maine visit.
Posted by Peppersass at 4:49 PM No comments: