Trailhead: Trailhead is at Slide Dam parking area on Park Tote Road in Baxter State Park, Maine. Parking area is on the right about 45 minutes from the Togue Pond Gatehouse, 14 or so miles.  The small lot rarely fills up but may on weekends.  The gatehouse keeps track of that lot but I'm not sure if they'd turn you away at the gate if their tally indicates it's full.
Lesson learned:  Sometimes rangers can overstate things.
Hiked with Rich and Lindsley today. The day before this hike we stopped in at the ranger station to buy some patches and look around.
The ranger there described North Brother as "just like hiking Katahdin only not as difficult."  Seriously?  Not what we wanted to hear!  Our legs were fried from hiking Katahdin's Baxter and Hamlin peaks two days before.  We were looking for a hike similar to, say, Carter Dome; something mellow with wooded trails and just a few steep sections (see Carter Dome trip report).
We certainly didn't want hours of boulder scrambling in the sun the likes of what we'd tackled on Hamlin Ridge trail.  So we questioned the ranger further:
Are there big boulder scrambles?  No.
Will we be hiking on exposed rock? A little at the top.
Is it steep?  It gets steep right at the beginning and there is another steep spot just before the summit.
His answers reassured us. We got to Millinocket, bought ice and the next day's lunch and headed out to dinner.  Since the next day's forecast indicated warm and humid our plan was to hit the trailhead early.
"Humidity is high with temps soaring into the 90s, not a common occurrence in Baxter Park.  We are weekend warriors moving stiffly on blistered feet attached to “fourth day legs,” wearing sweat drenched shirts and shorts for the third time in as many days. We have bug bites on our bug bites, using our Deet to repel the swarms, and remove the pine pitch from our hair and hands.  We smell terrible as we step onto the Marston trail headed toward the peak of North Brother."

It wasn't anything like that but it sounds pretty badass doesn't it?


We were up at 5:00 and out the door by 6:00. The ride from Millinocket to Baxter State Park takes 30 minutes and the trip from the gate to the Slide Dam parking lot takes at least another 45.


We almost missed the parking lot (keep an eye out - Rich stopped only because he saw an outhouse).
﻿

﻿
We could feel the heat of the day creeping in as we pulled our packs out of the car.  ﻿ 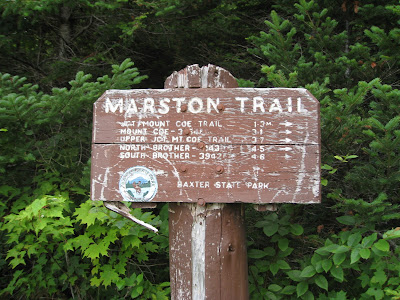 Once on the trail we enjoyed the cool of the many water crossings - none really substantial.   The trail steepened a bit about ten minutes into the hike (just as the ranger described).


We took a badly needed break at the Mt. Coe trail junction; the humidity was kicking in. Fortunately a little Gatorade and something to eat got us back on track.

After the junction there's a 2.3 mile stretch before the next Mt. Coe trail junction. Mt. Coe trail intersects the Marston trail twice: here, and after it passes over Mt. Coe and South Brother. We'll arrive at the next junction about a mile before the summit of North Brother.
﻿

The second Mt. Coe trail junction is pictured below.

What's most noticeable about this area is the erosion.  The trail appears to be falling in on itself.  We found ourselves ducking under and around trees and vegetation.  Not the prettiest part of the hike.

The trail levels again and things brightened as the sun shone through the trees.  It was getting hot but the elevation and occasional breeze kept us comfy.

We advanced to a steeper section of rock.  I wouldn't call it scrambling, more like hoisting and rock hopping.  Busy negotiating the few large boulders on the trail we barely noticed we were out of the trees and on the summit cone.


The sky was bright and view clear with Mt. Katahdin off in the distance (not as close as I thought it should be).

After a bit of picking our way through the alpine boulders we saw the summit sign on the top.

There's no discernible path the last 20 feet, you just head for the sign.  It's about twenty minutes exposed and out of the trees before you get to the summit (good to know if there's a thunder storm coming).


After way too much congratulating and too many silly photos, we found a stable rock and had lunch. The bugs were fierce.  Before we headed back down I scouted out the herd path to Fort Mountain, a peak on my New England Hundred Highest list.  It is easy to see where the path begins.

﻿
We started back down the mountain feeling victorious.


Descending was easy; so much flat, sandy trail!  As we descended the heat enveloped us so we took a bunch of breaks (we were in no hurry).  Our "day four" tired bodies were nourished with caffeine and electrolyte products.  Replenished, we made it down without incident.

﻿﻿
Loved this hike!  And not just because it was our final New England 4k. The peak was remote, and trail peaceful and fairly easy (silly ranger).

Back at the hotel Rich and I proved once again that we are lightweights and drank just two glasses of champagne before we had to hand over the car keys. Hiking and heat make champagne twice as potent, that's a fact!
(For you, brother.  Here's the thing.  67 is too soon.)


Posted by Peppersass at 5:18 PM No comments: