Trailhead: Trailhead is located on Forest Road 59 (also called Steam Mill Road) in Ripton. (FR 59 runs behind the Bread Loaf campus of Middlebury College.) Take I-89 north to Route 107 West to Route 100 North.  Turn left on Route 125 (Middlebury Gap) for 6.2 miles.  There's a big sign at the entrance Forest Road 59 with distances to trailheads (Skylight Pond trailhead is 3+ miles).   FR 59 is in fine shape and there's ample parking at the trailhead (road may be partially closed in the winter).

Lesson learned:  Find out what the summits look like and where they are before you go!


We'd not hiked in Vermont for over a year and I was itching to spend some time on the Long Trail.  The weather forecast was great and this hike has some cool things to explore: Skylight Pond and Lodge, Emily Proctor Shelter and several overlooks with fabulous views - plus I knew we'd meet plenty of hikers on the trail on this warm Sunday.

"Vermont? You're kidding - right?" was Rich's response when I suggested the trip.  From our home in Stratham it's a three hour drive to the trailhead.  But these peaks are on the New England Hundred Highest list, a list I am working on.  Besides, we haven't hiked the Long Trail since we bagged Stratton Mountain in 2011 (see trip report).  Rich has obviously forgotten how nice the Long Trail is! After much discussion, he agreed to the change of state and scenery.

We didn't get to the trailhead until 10 a.m. but were on the trail in ten minutes.

We crossed the first of about a dozen water crossings.  The water was so low we didn't have to rock hop; we just walked over the pebbles poking up through the wet.  We walked a bridged crossing soon after.

Skylight Pond trail intercepts the Long Trail.  It's a walk in the woods and felt that way for most of the trip. Not until we closed in on the trail junction and the last series of switchbacks did it feel like we were on a mountain.  Views peek through the trees and the trail makes its way up the side of the ridge.  At 2.3 miles we arrived at the junction.

We deviated from our route to check out the pond and lodge (just 1/10 of a mile from the trail).  The Lodge is self-service cabin that sleeps 14.  I guess a ranger comes by in the evening and collects a small fee from guests. 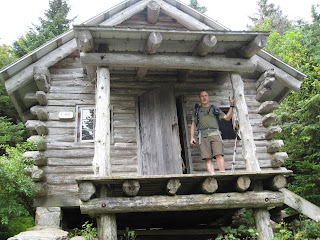 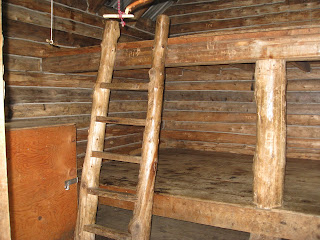 In the woods we found what appeared to be the height of land and a small cairn on a bump.  ﻿

After visiting the cairn we went down to a small overlook and had lunch.  The view is partially obstructed but views aren't plentiful on this hike; we made the best of it.  After lunch we took that hairpin turn heading north toward Mt. Wilson.  The trail steepens and before long we reached the col between the two mountains. The shelter is located at the junction of Emily Proctor and Long trails.

The Long Trail continues behind the shelter.  Take a right just before the shelter and head toward the white blaze, turning right at the blaze.  I went straight over a small stream and had to double back.

No blazes from this point until Mt. Wilson but the path is wide and you'll know you're on it if you pass a sign for the tenting area.

The trail heads up and soon we were rolling over a series of bumps. I kept an eye out for a path to an overlook, which I'd read intersects at the Mt. Wilson summit.  We found a height of land with a path to the overlook.  This must be it.

Now I was thinking Mt. Wilson is the peak with the cairn and started to look frantically for it. I'm such a stickler for details and annoyed that I didn't get a clear description of the summit before heading to the trail.  (I've hiked almost to a summit a time or two before, thinking I was there only to find afterwards that the real summit was waiting for me around the bend.)

I headed further down the Long Trail a bit, checked the map, looked at the GPS (which had beeped, indicating this was the summit). The trail beyond descended then leveled out; no other bumps in sight. The mileage was right; we were at 5.3.  We turned around and headed back, over the bumps toward Breadloaf.

And the GPS beeped. Again.

A tiny cairn sat next to the path; we'd walked right by it looking for that overlook.  According to the elevation numbers on the GPS, this bump was higher than the one we'd just left.  We marked a waypoint and continued on back to Mt. Breadloaf.  The hike back up to Breadloaf was no problem and the trip down was uneventful.  By 4:30 we were glad to be off the trail and headed for a good meal.

After dinner and a beer at Tozier's Restaurant, we headed home.

Driving back home was sobering.  We saw "WATER MARK - IRENE 2011" painted on one Hancock house - just below the second story window!  That house is across the street from the White River.  In Bethel, hillsides were filled in with large pieces of quartz where the river scoured trees and soil  - fifteen feet up.  Some places will never be the same.

When I got home we checked the GPS track and AMC's "Routes to the New England Hundred Highest Peaks" which confirmed that Mt. Wilson's true summit is on the bump south of the overlook.  Sheesh.

Breadloaf and Wilson aren't the most spectacular peaks but this hike was a nice way to spend the day. 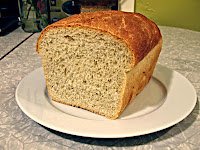 Posted by Peppersass at 5:51 PM No comments: