Mileage:  5.8 miles (RT) - took us just over four hours
Elevation gain:  2,100'ish
Trailhead:  Trail begins at height of land at Sherburne Pass, across the street from the Inn at Long Trail, 709 Route 4, Killington, VT (past Killington Road and before Pico Mountain Ski Resort).

Lesson learned:   Don't lock yourself in the cabin!

Hiked with Rich today.  Pico Peak is not the smallest peak on the New England Hundred Highest list but it just may be the easiest with just over 2,000' gain on a mild 2.9 mile route.

This was my last "listed" peak bag for the calendar year; #85 seemed like a good stopping point. We arrived at the parking lot around 10:30, surprised and delighted to see other cars in the lot (always nice to meet others on the trail).


To the right of the Inn is the entrance for the Long Trail northbound.  At one time the Sherburne Pass trail was the Long Trail southbound but now hikers must travel .8 miles west on Route 4 and cross the road to pick up the trail (which at the time of the reroute must have really been depressing for the owners of the Inn!).

Most hikers we saw today were wearing orange - lots of it. Since New Hampshire's hunting season doesn't get rolling until the first of November we weren't too worried about it and half-heartedly brought an orange hat and red jacket.  Good thing we did.  We found out later that this was Vermont's opening weekend for hunting.

Pico ski resort has a webcam which we viewed the day before so we knew there'd be some snow. We headed up the blue blazed trail.


The trail is well established and ascent gradual; we barely broke a sweat. Trail maintenance crews were out (in orange vests) digging run-off channels. One asked if we saw the sinkholes; limestone has been washing away for years in one area by the trail called Sink Hole Brook - at 1.1 miles. We would check this out on the way back

At about 2 miles we came to the ski slope with the beautiful views.

After a few photos we walked the few hundred feet up the slope where the hiking trail re-enters the woods - on the same side (the trail does not cross the ski slope).


Some people avoid this next section of trail, opting to go straight up the slope toward the summit which cuts .4 mile from the trip.  We decided to continue on via the hiking trail which I can only describe as uninspiring. The path follows the contour of the mountain (no up, slight down) and it's rough and rooty most of the way to Pico Camp.

Several people were already in the cabin when we reached Pico Camp. We stepped inside for lunch out of the cold wind and started a conversation with three hikers from Germany (they were touring New England). We shut the sticky door hard when they left which apparently locked it FROM THE OUTSIDE (the hook was in just the right position and engaged when the door shut).  Once we realized we were locked in, we became two crazy people yelling, "help! get us out of here!" from inside the cabin.

The nice couple hiking down the mountain who opened the door for us must've wondered how we got locked in!

Once outside - and feeling pretty foolish - we made our way to the summit. Directly behind the cabin is the Pico Link trail. Thinking this trail is really steep I put on my microspikes and I was getting cold too so I put on my ski mittens. 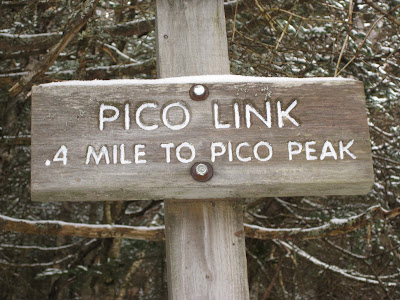 The trail does steepen and pops out onto a maintenance road and it's clear where the trail crosses the road and ducks back into the woods.  Soon it pops out again, this time on the Forty-niner ski trail.  As recommended in Day Hiker's Guide to Vermont we noted where we came out of the woods to find our way back easily.

A short hike up a windy slope brought us to the lift and the "Information" building.

Reports indicate the summit marker is a blue blaze on a rock several yards behind the information building. We climbed the stairs and started looking for it but with the snow cover we couldn't see rocks or a blue blaze.  I walked all around the summit, settling on a pile of rocks near a water pipe that appears to be on the height of land.


After traipsing around the summit, taking a few photos and giving up on the fruitless attempt to find that blue blaze, we started back down by way of the Forty-niner trail.

Frankly I'm amazed Rich went back into that cabin on our way back. We made sure we didn't shut the door this time! He changed his shirt, had a snack and met me outside to continue the hike down.

The trip back was uneventful; we stopped for a bit where the hiking trail meets the ski slope (views are breathtaking).

Fairly close to the trailhead parking, we heard laughter and passed several people playing in Sink Hole Brook. There we spotted the second sink hole nearby (hard to miss, not sure how we did on the way up).

In no time we were back at the car, taking off our muddy boots and heading east to the Long Trail Brewing Company for a beer sampler.  Our waiter kept bringing over glasses of different varieties for us to try.  What  friendly place and great ending to this mellow hike. (Can't wait to continue my NEHH list next year!) 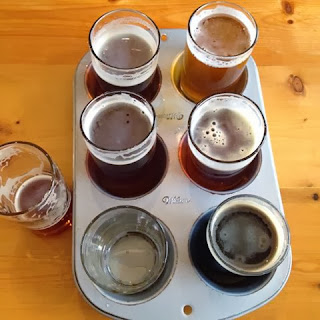 Posted by Peppersass at 5:19 PM No comments: