Elevation gain:  2,960'
Trailhead:  Trail starts behind Crawford Depot on Route 302, about 8.5 miles east of the junction of Rt. 3 and Rt. 302 (Twin Mountain), 0.1 mile after the Highland Center. Parking lot at the Depot is maintained in winter.  Overflow parking is across from Webster-Jackson trailhead.

Hiked with Rich today.  January thaw had come to New Hampshire and heavy rain drenched the Whites.  Throw in a week of warmer days and cold nights and you have slushy, icy trail conditions. The mountains had become one big ice flow.
It snowed the last two days and trails in Crawford Notch were receiving favorable reports.  So we decided to hike Mts. Field and Tom (which was supposed to be Mts. Field and Willey but as winter hiking has taught me, things don't always work that way.)

We stayed at the Profile Deluxe Motel to get an early start in the morning.  Still, we wound up running late and didn't arrive at the trailhead until 9 a.m.

We certainly weren't alone on this holiday weekend; the trails were buzzing with activity (if you wanted solitude it wasn't going to be here).  It was snowing and had been since the night before with no sign of letting up.

Anticipating a 9 mile hike we packed extra clothes, food and water -  making our packs heavier than usual.  We followed a large group up to the Avalon/A-Z junction.  Just up from that junction is a steep gully and the spot I got stuck on (with snowshoes) during last year's hike to Mt. Tom (see previous report).  It was no problem in Microspikes, though the descent into the gully was a bit icy (heavy traffic had scraped off the recent snowfall).

Once again, we underestimated the steepness of this trail as we climbed the snowy, sometimes very narrow path.  After crossing another small brook the trail steepens. At times our Microspikes slipped and some icy spots required careful steps.

At the Willey Range trail junction we saw the large group heading up to Mt. Tom's summit.  Two others stayed behind to put on their crampons which made me wonder just how icy the Mt. Tom spur trail was.  ﻿ 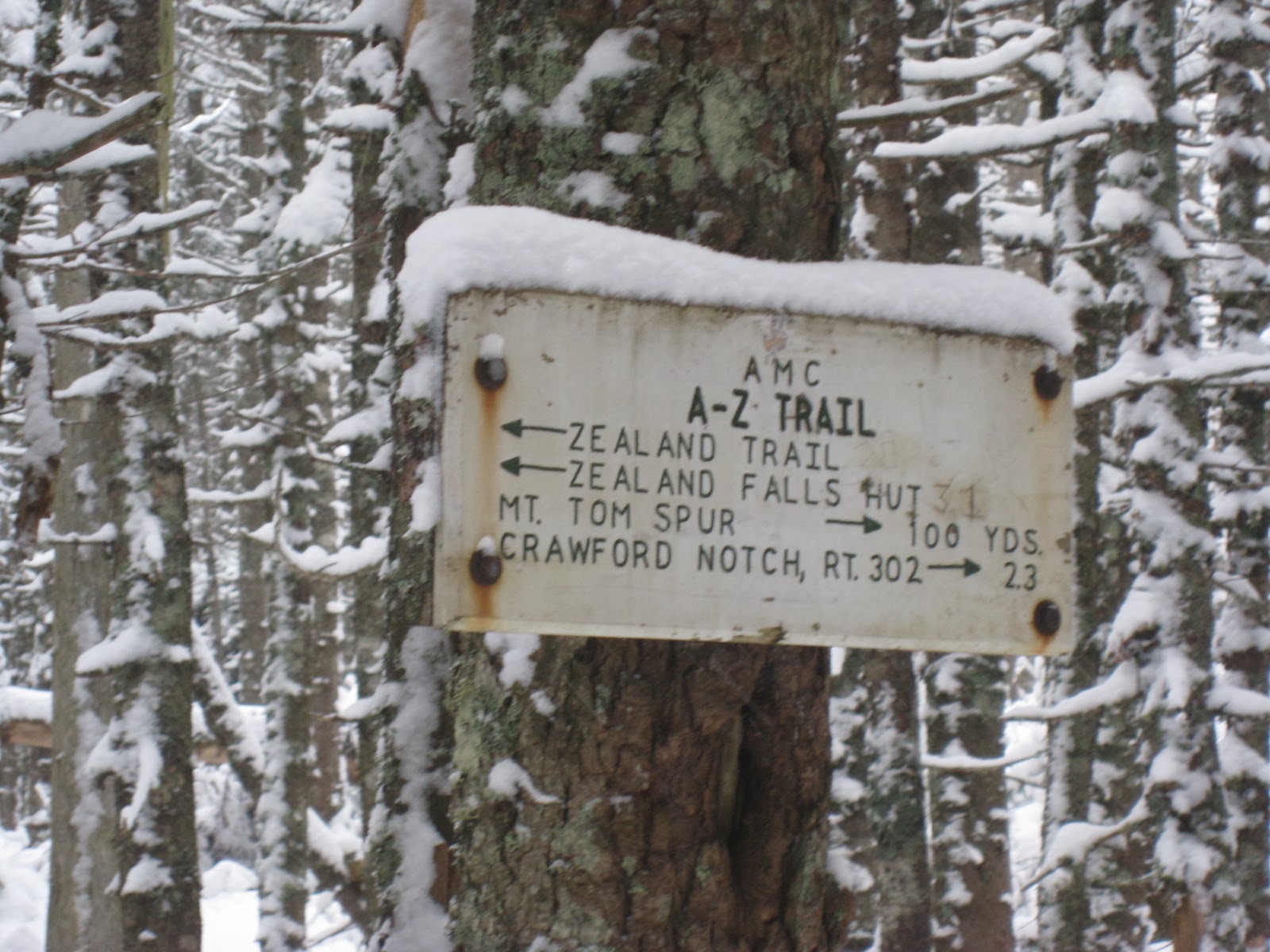 The Willey Range trail wasn't quite as broken out and our surroundings quieted.   We could hear the snow falling like sugar through the branches.

The trees were heavy with white.  An occasional "whomp" was heard when the branches gave way, snow landing in a heap.  This was a pleasant walk in the woods, not much ascending. Soon we were at the Avalon trail junction.

We pushed up the short steep knob to the summit of Mt. Field.  For a viewless peak in the middle of January, it sure was crowded.  We took our packs off and changed into warmer clothing, gulping down a sandwich.  Three guys from Philadelphia were lounging around, wearing crampons....talking about crampons.... convincing us to put on our crampons.

We'd never used our crampons; I'm not sure what we were saving our them for.  I've heard people say they never use then, rarely use them, hate having to use them.  We'd practiced walking on snow and ice with them but never really used them.  About half of the people we'd met on this hike were wearing them.  So, on a snowy summit with no wind and not-quite-frozen fingers, Rich and I put our Microspikes away and donned our crampons: his, Hillsounds Pro; mine, Black Diamond Contacts.

Rich was pretty spent from the hike up and didn't want to continue to Mt. Willey so we started back.  Down the summit knob we went, the crampons grabbing the hill with each step.

We flew down the trail back to the junction, feeling renewed.  When we got to the Mt. Tom spur we decided to try our crampons on an ascent - up Mt. Tom. 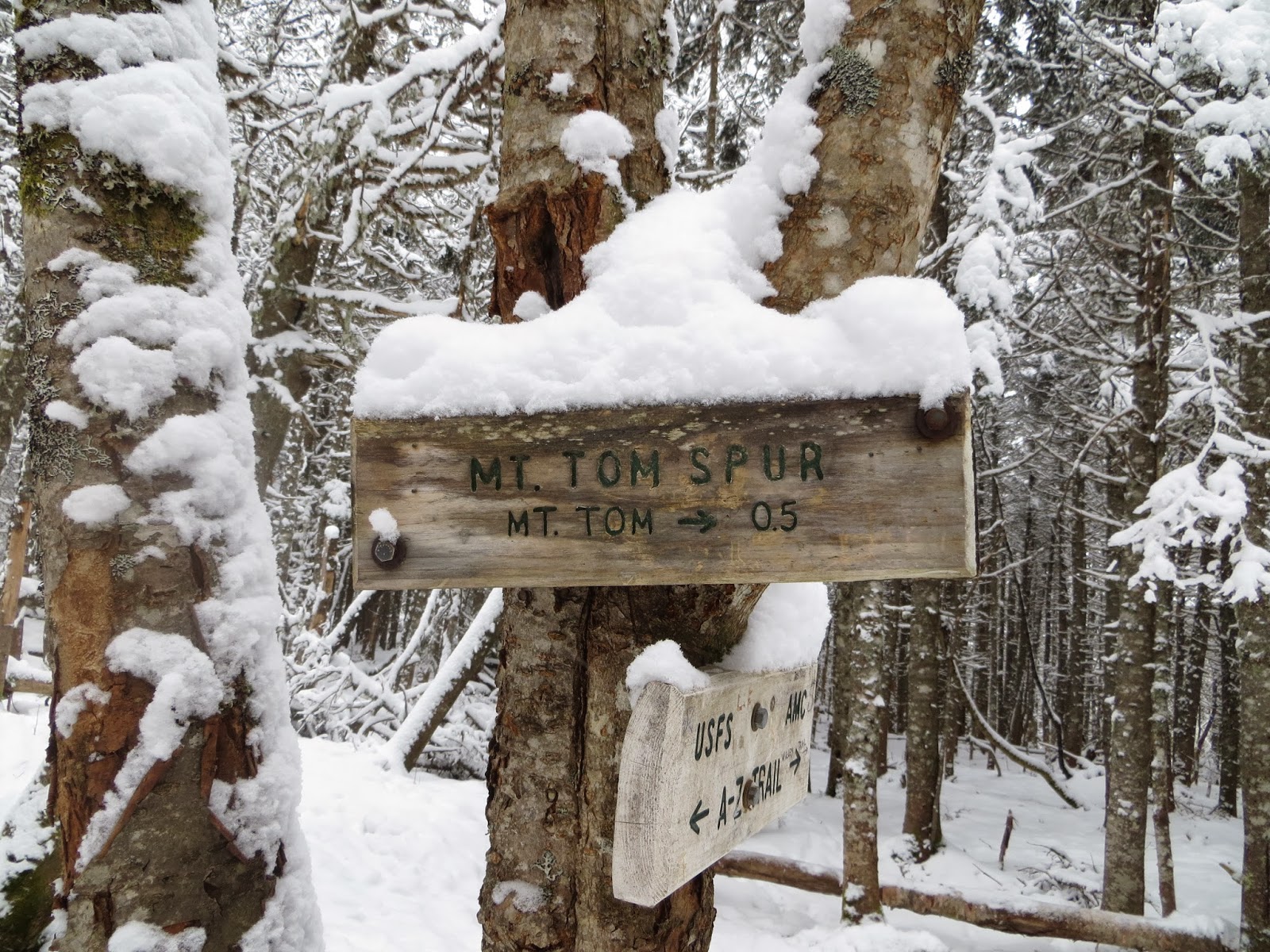 The crampons bit into every steep, making for easy work up the spur.  We were at the Mt. Tom cairn in no time (last trip we could not find the cairn).

The hike down was uneventful for the most part. The crampons provided stability on those steep icy sections.

We were loving the added traction of our crampons, being careful in our steps.   The real challenge would come at the gully.

Steep yes, and icy with most of the snow worn off, that gully looked mighty scary. My tired legs were able to get half way down it but frankly the slope got too steep for me. And I lacked skill and experience in the crampons. So off they came, down I sat for the last 20 feet of the slope.  Glissading would have been fun if not for a steep drop off just to the right of the slope.

The hike up the gully was uneventful and from there the trail mellows to a gentle descent.  We were back at the car in no time.  It was a glorious day and a good workout.  We hit Margarita Grill for food and a beer.
Posted by Peppersass at 5:36 PM No comments: