Trailhead:   Park at the Bucklin trailhead, four miles down Wheelerville Road in Mendon, VT.  This area is known as Brewers Corner, a sharp right on a dirt road.  Parking is on your left.  Mendon Peak is accessed from the gated road to the right of this parking lot.
This was a group hike hosted by AMC's Boston chapter.  Rich and I stayed in Rutland Friday night and met the group at Bucklin trailhead.  We got on the trail at 10 a.m.


﻿
Dirt roads are plentiful off Wheelerville Road, many of them created by loggers. Our path is well maintained in the beginning but going gets rougher (though footing remains good).


The group reached the first fork. We went left on the less traveled road.  Within a few hundred feet we were ascending. 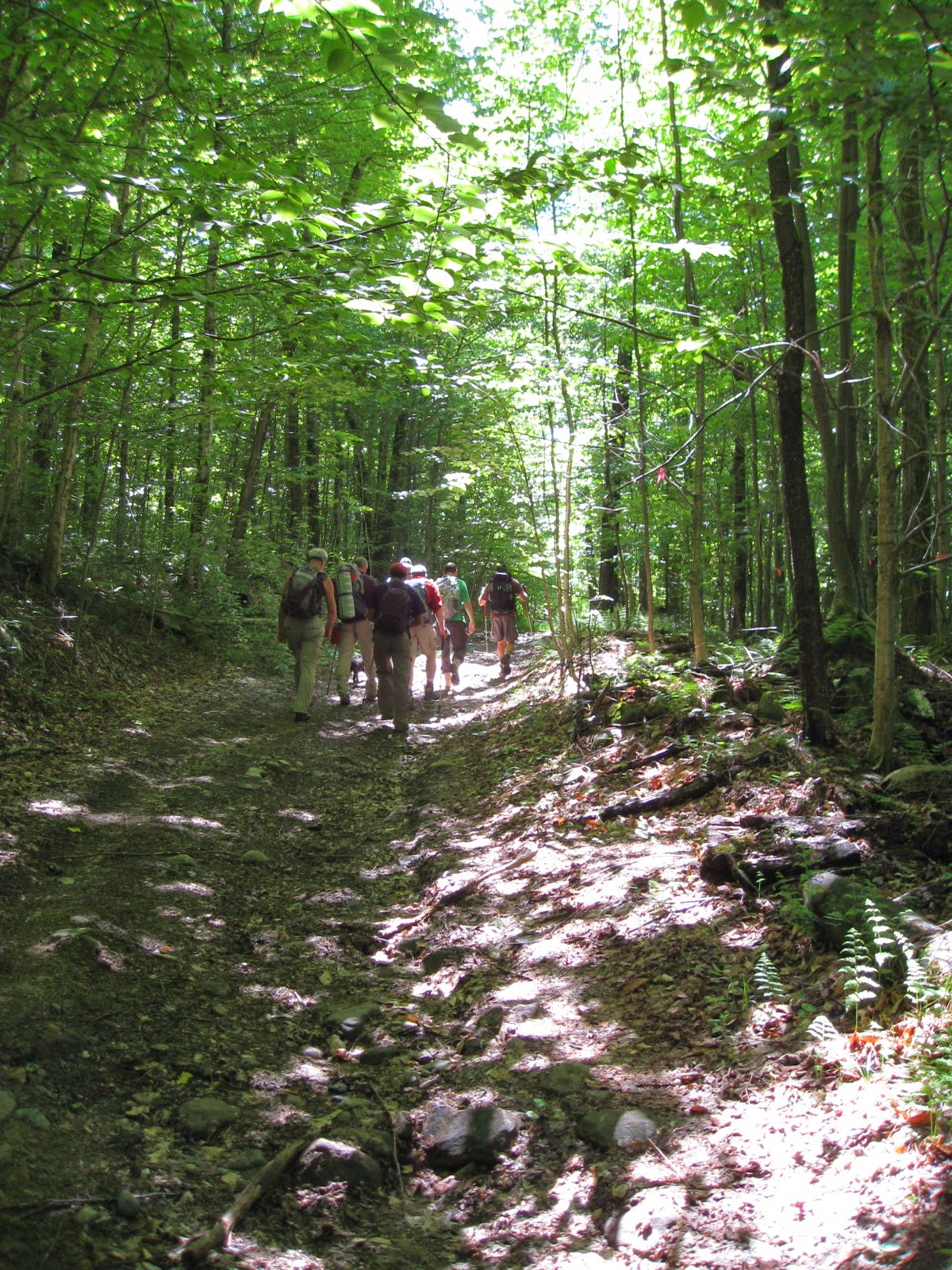 At the next fork we took a right and kept right until the road descended, ending at a "T" intersection.  This is where the lower road and the road we took meet.

We took a left on this road walking parallel to the river and soon reached our first crossing.

We crossed water again (insignificant little gurgle) and the road gets rougher and steeper. There are some blow downs to contend with, usually hopping over or ducking under.
The first cairn is located at a switchback.  Some hikers head into the woods from here but we continued.
﻿
Cairn #2 coming right up (not as grand as #1).
﻿
Cairn #3 is a sad little thing but it does the job. Elevation: 3400' give or take.  We looked around for a herd path (it's RIGHT THERE).﻿

We stopped and put on pants, gaiters, and eye protection. Ready for a bushwhack, we set a course of 281°, started on the herd path, then dove into the woods.
The woods are quite open and herd paths are everywhere begging take me! take me!
We passed a large rock with a fallen tree and a red blaze or two but for the most part nothing is unique.  It's all woods and blow downs - open with good footing (good news).
﻿
﻿
Not much elevation gain for the first ten minutes, but soon our way got steep and we started to knock off that last 400' to the summit.
﻿

We topped out at East peak.  Some nice views but we're after that canister on West peak so we found the herd path between peaks and continued on.
﻿The summit canister on West peak is located on the right side of the peak at a little lunch spot. It's pretty beat up dangling from its bracket, fastened to an old tree with string.   But for a NEHH peak bagger it's a beautiful site! 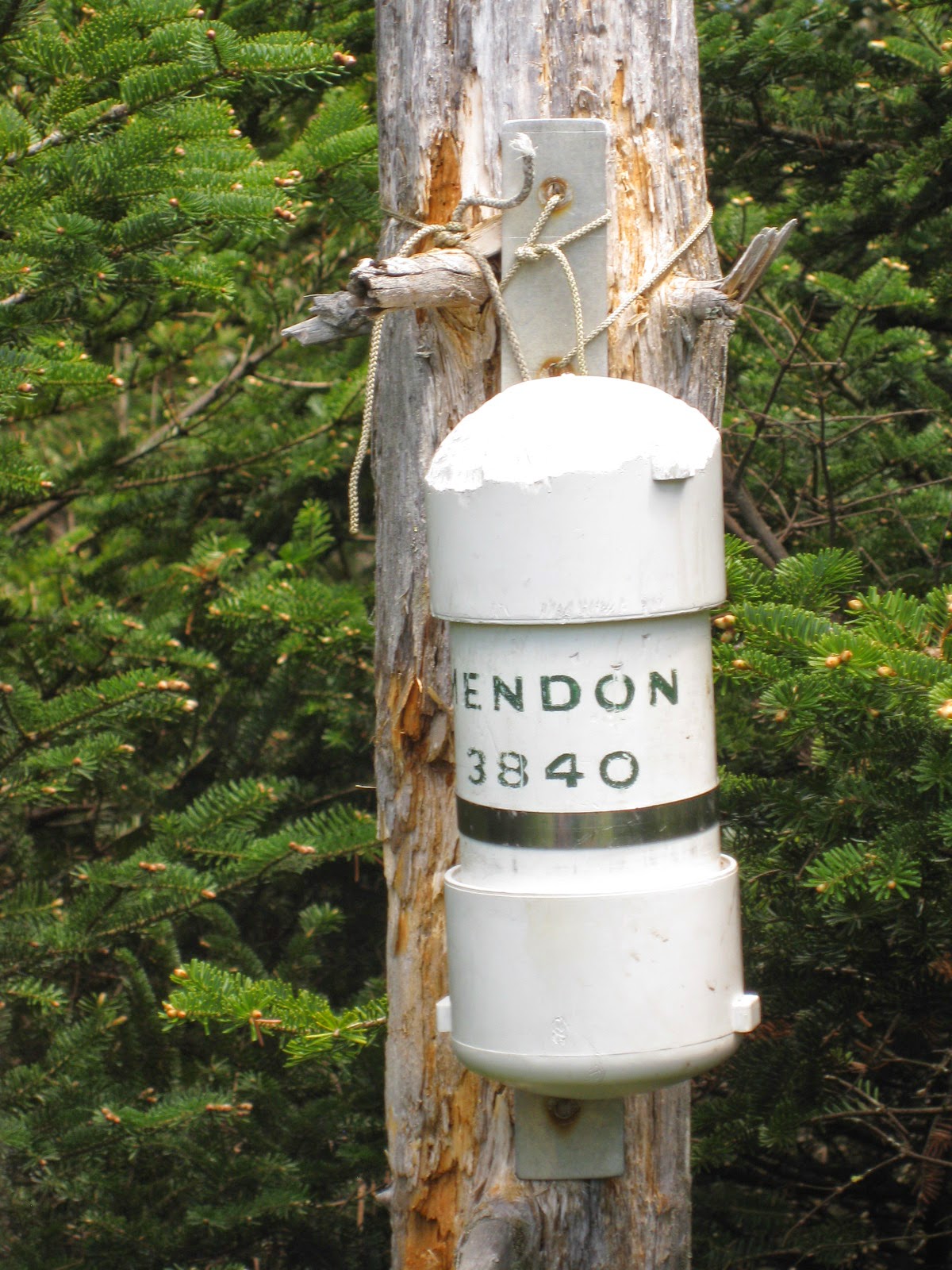 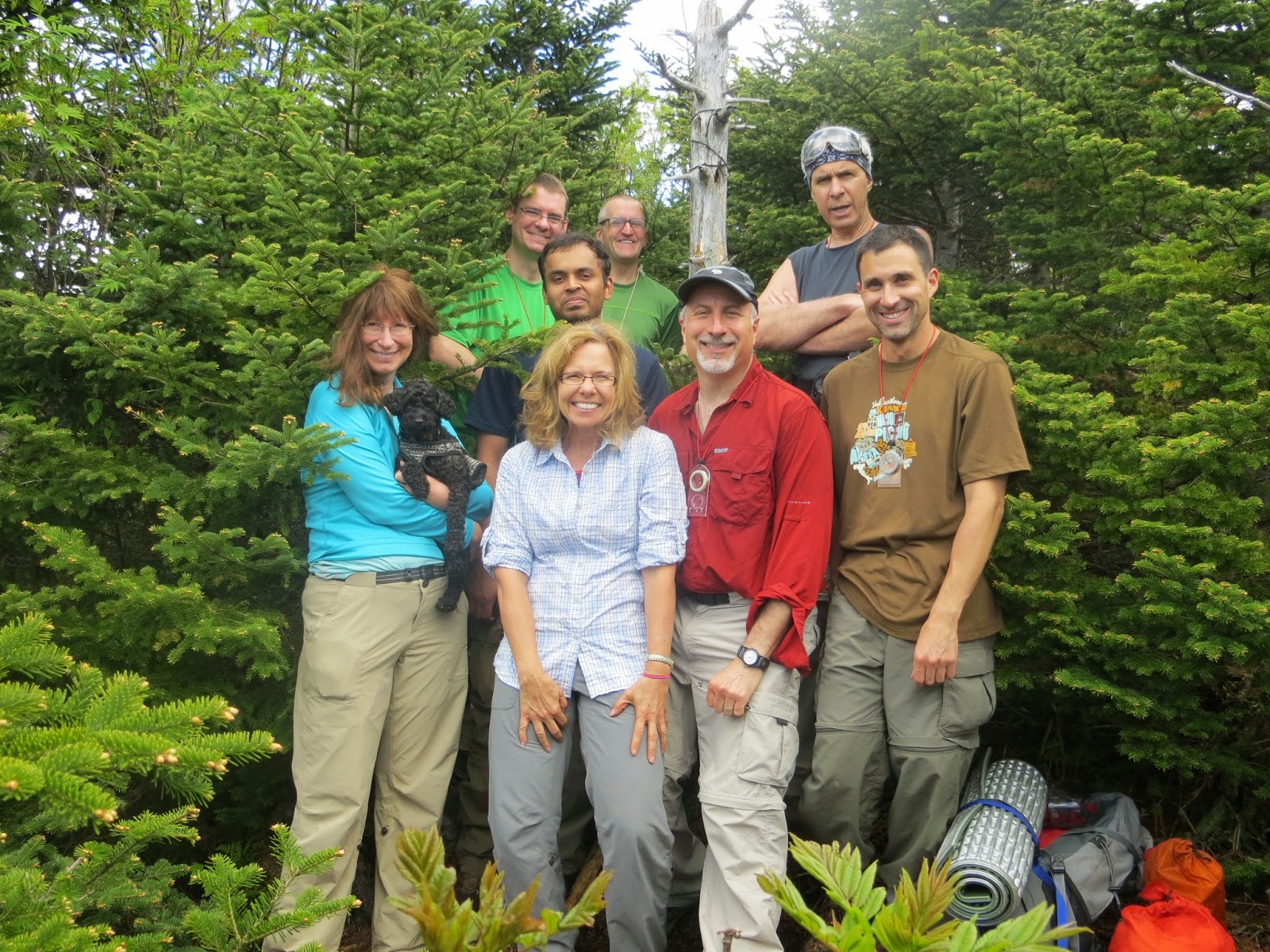 After lunch we gathered up our things for the return trip. Back on the herd path we quickly resummitted East peak and, reversing our compasses (putting black in the red shed), we started down.
When we reached the old road we decided to bypass the high road and take the lower road back to the cars.


One word describes the lower road: Mud, Mud, MUD!  We were very glad we took the upper road that morning, no mud or water crossings!
On the lower road we reached a brook crossing with limited rock hopping options.  Everyone made it across without incident.

﻿
We continued on, turning right at the large blow downs blocking the road (uphill climb beyond them).  This area is a little tricky but we were pretty sure we were near the end of the hike and had no plans to go back up hill so we scouted around the area and decided to go right and cross the river (which turns out to be the first brook crossing mentioned in so many trip reports - a crossing that has the reputation of getting boots and feet wet. It didn't disappoint).

The road continues above the washout area (shown below). Once on the road we reached that first fork and the cabin and back to the parking lot (at 4:15).
It was a beautiful day on old roads and in the woods.  We stopped for a beer on the way home.

Posted by Peppersass at 1:01 PM No comments: