Elevation gain:  2,575'
Trailhead: Trailhead and lots of parking are located two miles down Sawyer River Road, which is off Route 302 north of Bartlett, NH. Note: this road is gated in the winter.
Hiked with Gary and friends today. I'd done research on this peak, loaded a friend's track in my GPS and my friend Ken was bringing one of his friend's routes on his GPS.  Armed with copies of trip reports, I figured all bases were covered.
Frankly I was nervous about the route.  Some report a well-established herd path; others indicate continually finding and losing herd paths, super steep ascents and spruce traps.  I wasn't sure what we'd find. 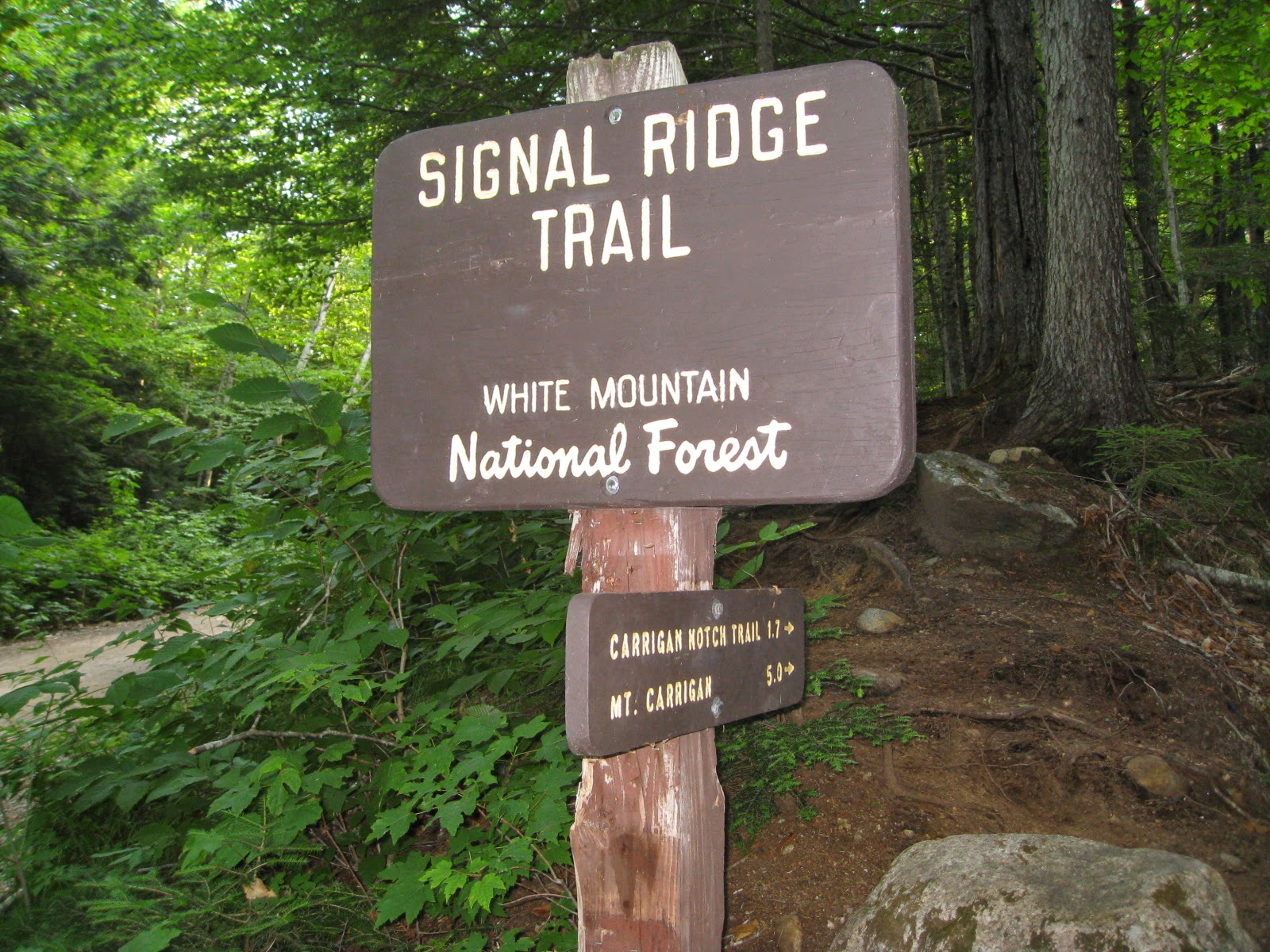 The area around the Rock is muddy  (once flooded by beavers).  Stepping stones are arranged around it. A sharp left turn (and about 10 steps later), there are several birch logs on the ground.  The one on the left marks the start of the bushwhack.

We peeked past the log and into the woods to see a definite path.  This is the drainage area discussed in many trip reports.  We followed it just so far and were stopped by blowdowns.

Perhaps we should have found a way around the blowdowns and continued in that direction. Instead, Ken and I looked at our GPS tracks and headed right (northwest). We were no longer on a path.

Immediately the woods become thick and our progress slowed.

Our friend, D. was particularly good at finding paths-of-least resistance as we forged up, and even better at finding herd paths.  It got to the point where we would find a path, lose it, yell for D., she'd get up front and find where it continued.

It got steep pretty early on. The higher we got, the steeper it got and in mid-July it's mighty hot wearing long sleeves and long pants as you're yanking yourself up to the next step by roots, handholds and those mighty little spruce (thank you, deep root structure).
﻿

We could see incredible views of Mt. Lowell through the trees, and the promise of spectacular views at the talus field spurred us on.  Ken and I checked tracks often to be sure we were headed in the right direction.

D. found the herd path just below the talus field. And, we could see where it continued back down (we had been bushwhacking just south of this path).  Stifling a whinny of joy, I set a waypoint here and continued up, this time of a well defined path.

I remember one trip report describing looking up and seeing trees and more trees and wondering where the talus field is.  I expected I would see it coming up in the distance, or evidence the woods were ending. But it appears without warning -  just a few yards of rock on the trail and there you are!

The field is smaller and narrower than I'd expected.  It's quite the odd thing, like a rock necklace on the throat of the mountain.
There's a cairn marking where we entered the field. It took a bit of searching but we found the other cairns (hey, it's hard to find a pile of rocks in a pile of rocks!).

We found another cairn in the middle of the field, pointing the way to a third which marks the entrance to the upper herd path (which leads to the summit).

﻿
As we stepped onto the rocks, they moved every which way.  I gingerly placed each step without weight to make sure the arrangement of rocks would hold me before moving forward.  But it's a short jaunt and we were up at the third cairn in no time.
The view is amazing!  We stopped briefly to take it all in and then summit fever got the best of us and we continued. 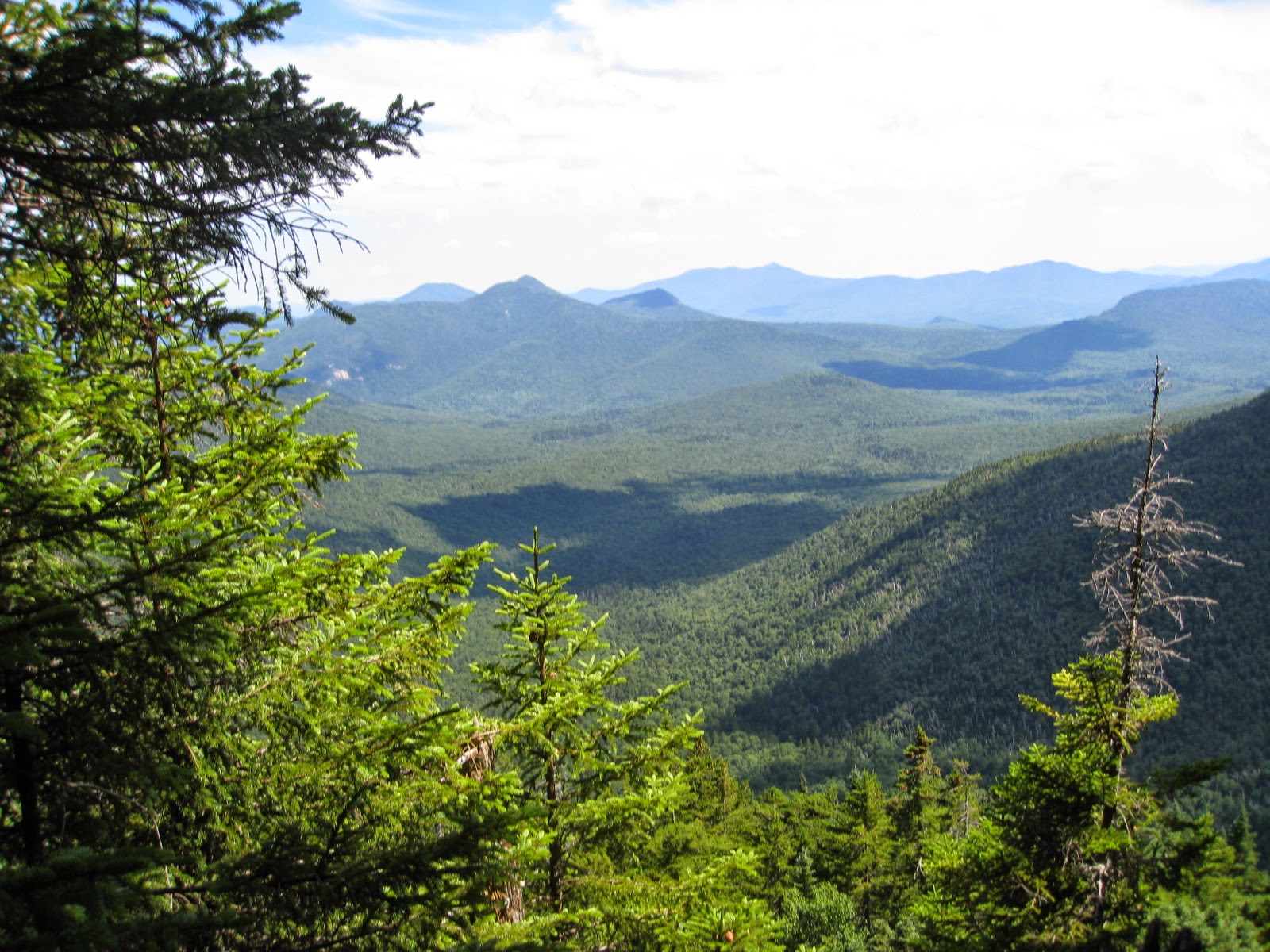 Yes, the upper herd path is steep but well defined and straightforward. Roots were our friends and we hauled ourselves up and toward the summit.  D. found the canister and the chair and we all gathered there for lunch.
﻿

We opened the canister to find the register drenched. We signed in anyway and put a dry note pad in a plastic bag.

The sun was shining down on the summit chair, the winds were calm and the bugs seemed to stay away. We lingered, a pleasant summit experience.  Then we packed up to head back.

At first, we couldn't find the path from the summit. Eventually we did and descended - carefully at times - back to the talus field.  Below the field we hopped on to the herd path and headed down.

Going was a lot easier.

Halfway down we started losing the path again. But down is down and we just kept plugging toward that low point.

As we trudged along, hot and getting tired, the woods became snarky.  It seemed every fallen log (and some standing trees) were ready to impale us in the most creative of ways.

And, in some places the ground was just an illusion. At one point the ground swallowed up Ken's leg.  But Ken has two of them so he gave one up (kidding).

As our elevation fell, the woods changed, sweeter and more open and with Gary leading, we popped out onto the trail right by the birch logs.  On the trails and back to the car in record time!

We were able to avoid spruce traps, stay close to the GPS track and get down by 5:40 p.m., in plenty of time for a draft beer at the Red Parka.
Posted by Peppersass at 4:08 PM No comments: