When you see the sign "Henrys Fork Trailhead" (bathrooms and parking), continue another .2 miles to the second parking lot (kiosk has a hiker register).


Alternate Shortcut (from Gunsight Pass to summit):  At the Gunsight Pass cairn continue down the main trail 30 paces and look to your hard right.  A small cairn sits in the middle of the strip of talus (hard to see).  Walk over the talus past the cairn to a well defined dirt path which leads to the top of the plateau. Cross the plateau and descend toward Anderson Pass. 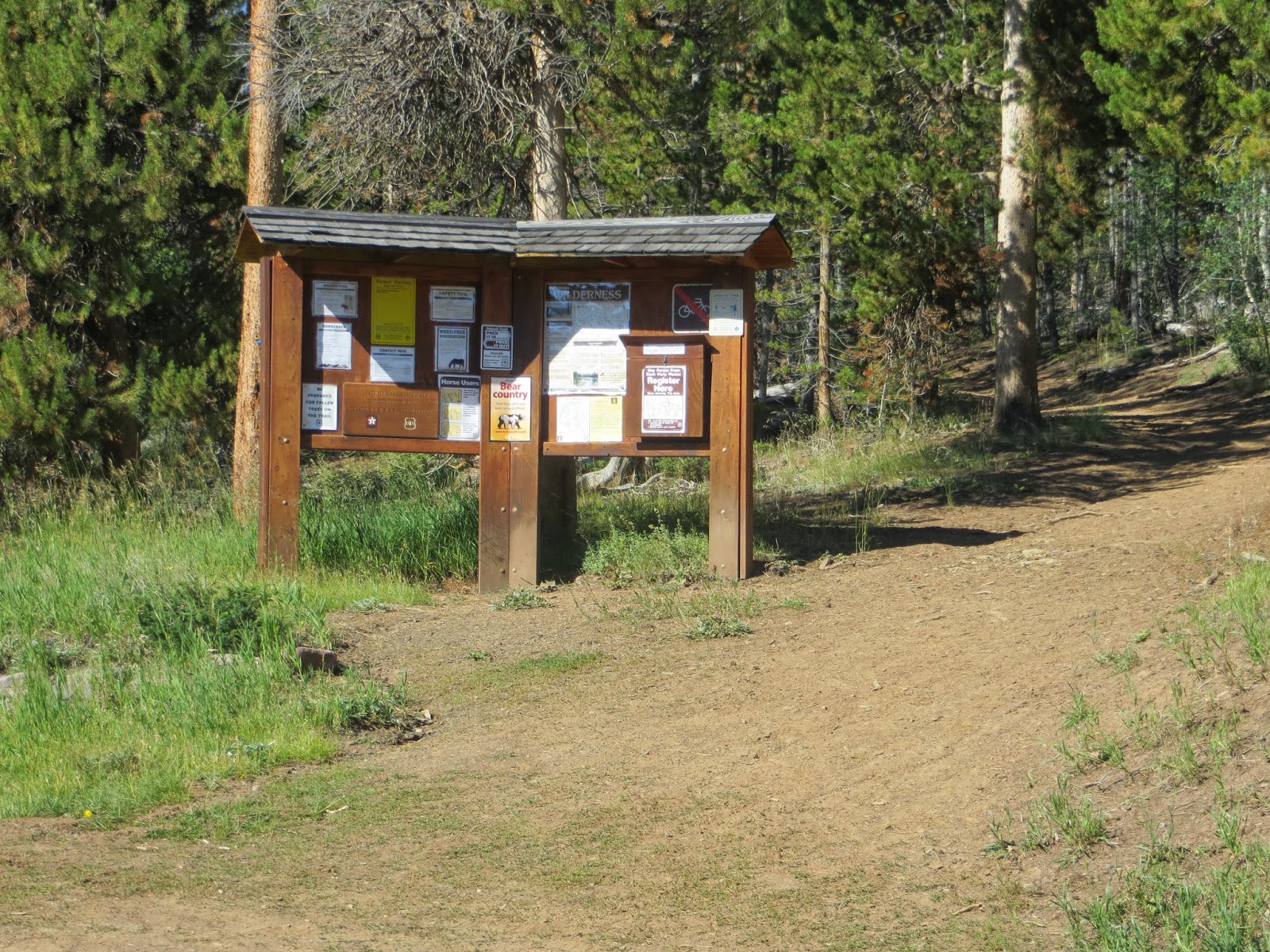 Hiked with Rich, brother Bob and his wife Peg (Bob and Peg live in nearby Park City).

Bob’s an avid hiker and just completed the Highline Trail, 78 miles of challenge - and in awful weather no less.  This was his third visit to Kings Peak (second within two weeks) and fortunately for me, he was in the mood to hike at a leisurely pace.

The plan was to hike in ten miles and set up camp on day one, summit on day two, and hike out on day three.

It was a nightmarish forecast - all the things you don't want coming your way while hiking or tenting: never-ending thunder and lightning, driving rains, flooding, dangerous winds.  During our prep we scanned the weather reports - forecasters even recommended postponing all plans for two of the three days we would be out.


The dates were picked months ago with no wiggle room for bad weather. Since we'd come all the way from New Hampshire we decided to chance it and hike anyway - at least the first day - in hopes we'd get one nice hike in and maybe some photos before deluged with disaster.

We drove the two hours to the trailhead and hopped out of the truck under blue skies, expecting that to change.


The Uintas are crowded in August.  We dodged horses and boy scouts the first five miles of trail (easy grades, nice views).  As day hikers we've enjoyed hiking with light packs, and our heavy backpacks slowed us.  Working hard at an altitude of 10,000' didn't help either.

Acclimatization.  We'd hiked Mt. Elbert (high point of CO) two years ago (see previous report) and arrived in Colorado three days early to acclimate.  Three days is not enough time for this process but we summited without incident.
On this trip we had about 21 hours at 10,000' before summit day. Kings Peak is 900' lower but with a much tougher approach than Mt. Elbert.   I found my breathing and stamina markedly better on this hike.  I did take Diamox for a few days to prevent altitude sickness (just as insurance).

The Uinta Mountain region is breathtakingly beautiful and we took a lot of photos.


The crowds thinned when we reached Elkhorn Crossing (at about 5.5 miles) and the black cloud that was creeping to our right approached with rumbles of thunder.   Our hearts sank  - we tried to remain hopeful.

We crossed the river on a crazy little bridge of three logs lashed together and wimpy clothesline (for balance). 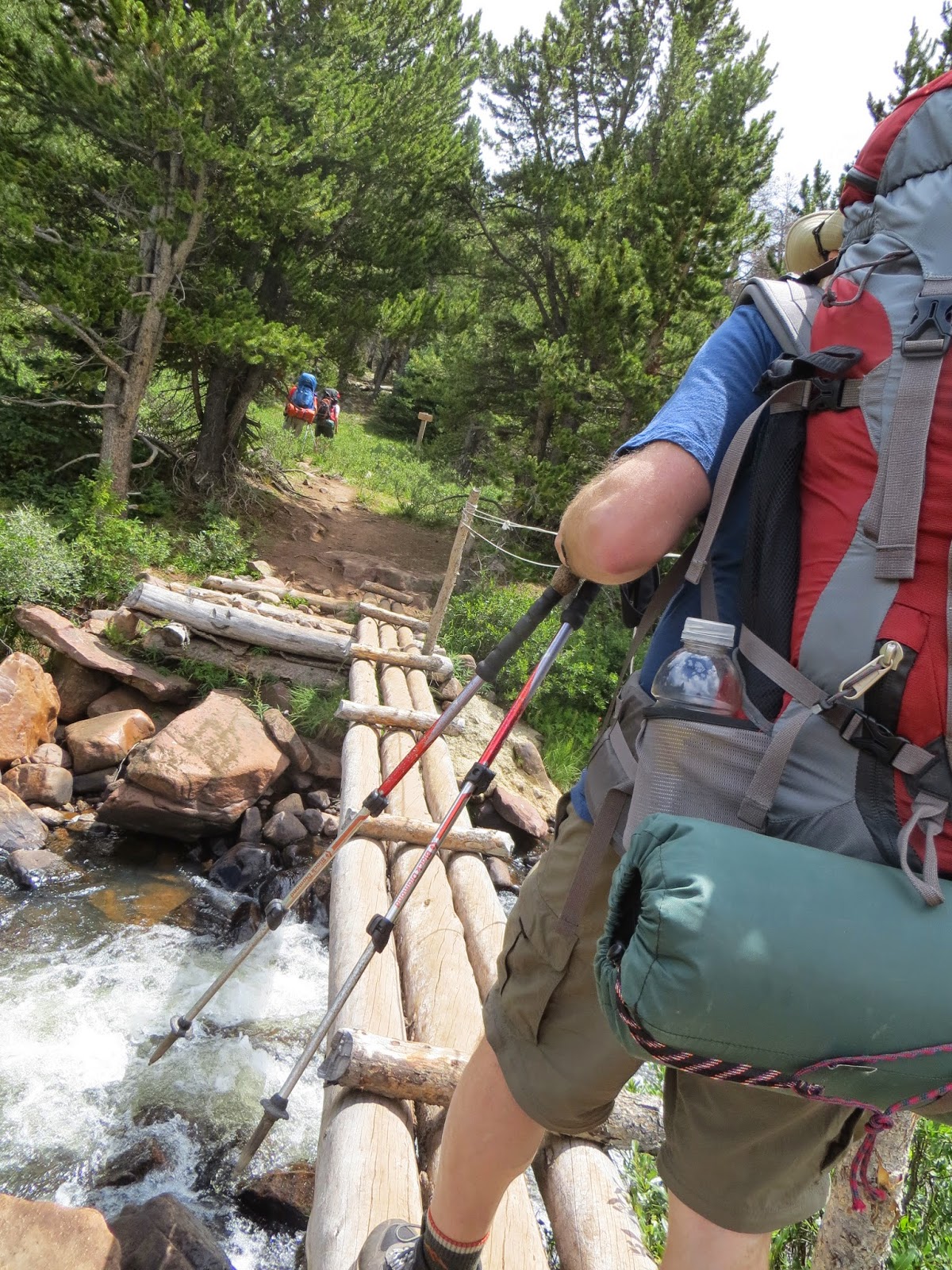 From here the path winds a bit with a few small ups and downs, then continues through beautiful mountain meadows, lush and in contrast to the deep orange brown hills and rock formations in the distance.


The thunder continued and across the river we could see a thick "mist."


Bob turned to us and said, "Get out your rain gear."  Within minutes hail pelted us as we scurried along bog bridges and mountain scrub.  Expecting the worst, we started looking for shelter from lightning.

There was no lightning. The hail left us just as fast as it came.  The clouds parted and blue skies reappeared.

(In fact, this short spurt of hail was the only weather event during our three days.  In SPITE of the weather forecast!)

At 2:30 p.m. and an altitude of 10,600' we set up camp outside the Dollar Lake area (on the right side of the trail just before the lake). Just 7.8 miles from the car, it was a perfect double campsite and we were able to have a campfire (fires are not permitted within 1,000' of Dollar Lake). 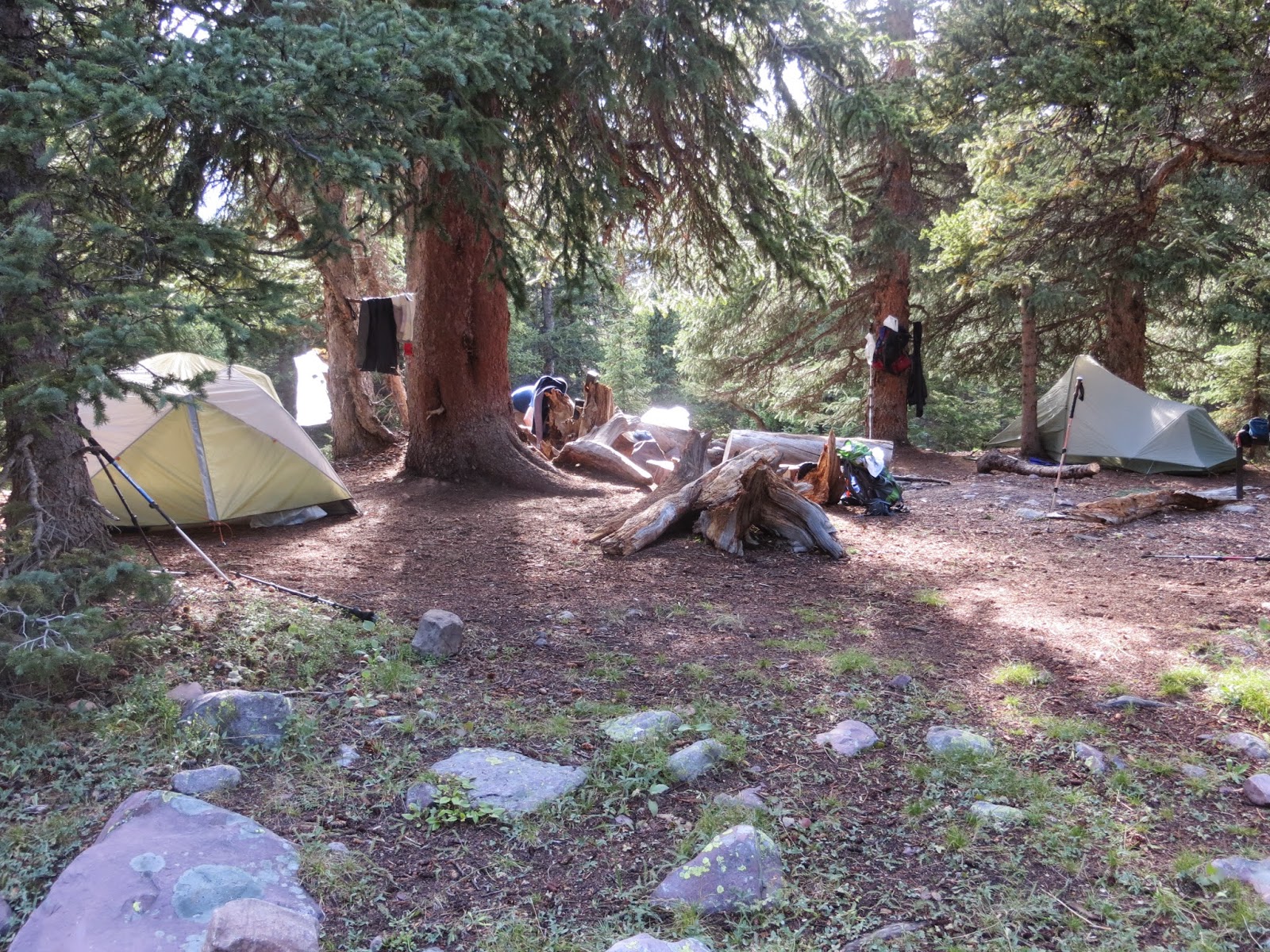 A brook that feeds into the Henrys Fork tributary is located behind this spot but it's not close and involves a struggle between you and mountain scrub to get to the water.  We found this out the first day.  On the second day we just went across the path to Dollar Lake for our water.

Armed with the hellacious forecast we'd seen before we left, we anguished over whether or not to head for Kings Peak the next day.  We decided we had to at least try to get there.

Our plan: leave real early to avoid dangerous weather and check the skies at the passes to determine whether to continue or retreat.

With the exception of an occasional cluster of trees, this hike is 100% out in the open and hikers with or without trekking poles are the ultimate tasty target for lightning!

4:15 a.m. comes early and the next morning Bob and I were headlamped and on the trail by 5:40 in hopes to bag the peak and be off of ridges, passes and the summit before the hard storms hit.  Bob had been bitch-slapped with rough weather during his Highline trip and was not in the mood to struggle with lightning and flooding again.

Peg and Rich opted to stay back and explore the trails near our campsite.

The sun rose in a veil of whispy clouds. Dawn was still very new when we reached Gunsight Pass.  So far so good - no sign of suspicious weather.  Breathless, I stopped for a few minutes (this would be our only break before the summit).

Here's where it got tricky. The path continues down into Painters Basin, dropping about 400' then heading west (around a small plateau) toward Anderson Pass (the gateway to Kings Peak summit).  There's a cairned shortcut that skirts the bottom of the plateau, eliminating up to a mile of trail.

We headed down about 100 paces looking for a second alternate shortcut; a cairn that takes you up and over the plateau, eliminating more mileage and unnecessary elevation gain.

But, we were too far down the trail and missed the cairn.  So instead we scrambled up jittery rocks, most of the time straight up the slope.  Footing is tricky but the slope isn't steep enough to worry about falling (just about rocks falling on me!). Slow going helped my breathing but every move was calculated, which took time.

At the top of the plateau we found the cairns marking the shortcut (noted for the way back).

The plateau is a mix of grass and strips of talus (rocky, bitchy little ankle biters that just want to mess you up).  We crossed the top and gently dropped down to the base of Anderson Pass. We saw just two hikers during this part of the hike.

To save time (still worried about the weather) Bob took shortcuts and I did my best to follow him around small streams and patches of grass and rock. The climb to Anderson Pass was uneventful and at the top I caught my breath while Bob ditched our poles.  We started seeing other hikers heading up from the basin. Weather still looked good so we continued up.

I wished I'd had those poles dozens of times on that rock hop up to the summit of Kings Peak. And I was glad I didn't have them the rest of the time!

It was a half-mile of large summit rock, similar to the rock piles we deal with in the Northern Presidentials in New Hampshire (see recent Mt. Adams trip report) - except this rock pile is on steroids!

It's important to note that there are no real scrambles on this trip, just rock hopping. And, it's never so steep that I felt I could fall off the mountain; at the most I could've twisted an ankle or banged a shin.

There are several false summits; we stayed low to avoid the jutting rocks of these impostors, and ascended once past them.

I stopped here and there to catch my breath and occasionally (though he would say often) asked Bob for the best way to get up to the next rock.   After about 40 minutes we could see where we would end up. The final push to the summit was pretty steep but stable, and quick.


We reached the summit at 10 a.m., took a few photos and wrote in the register.  Skies were clear, views breathtaking and I was feeling victorious. 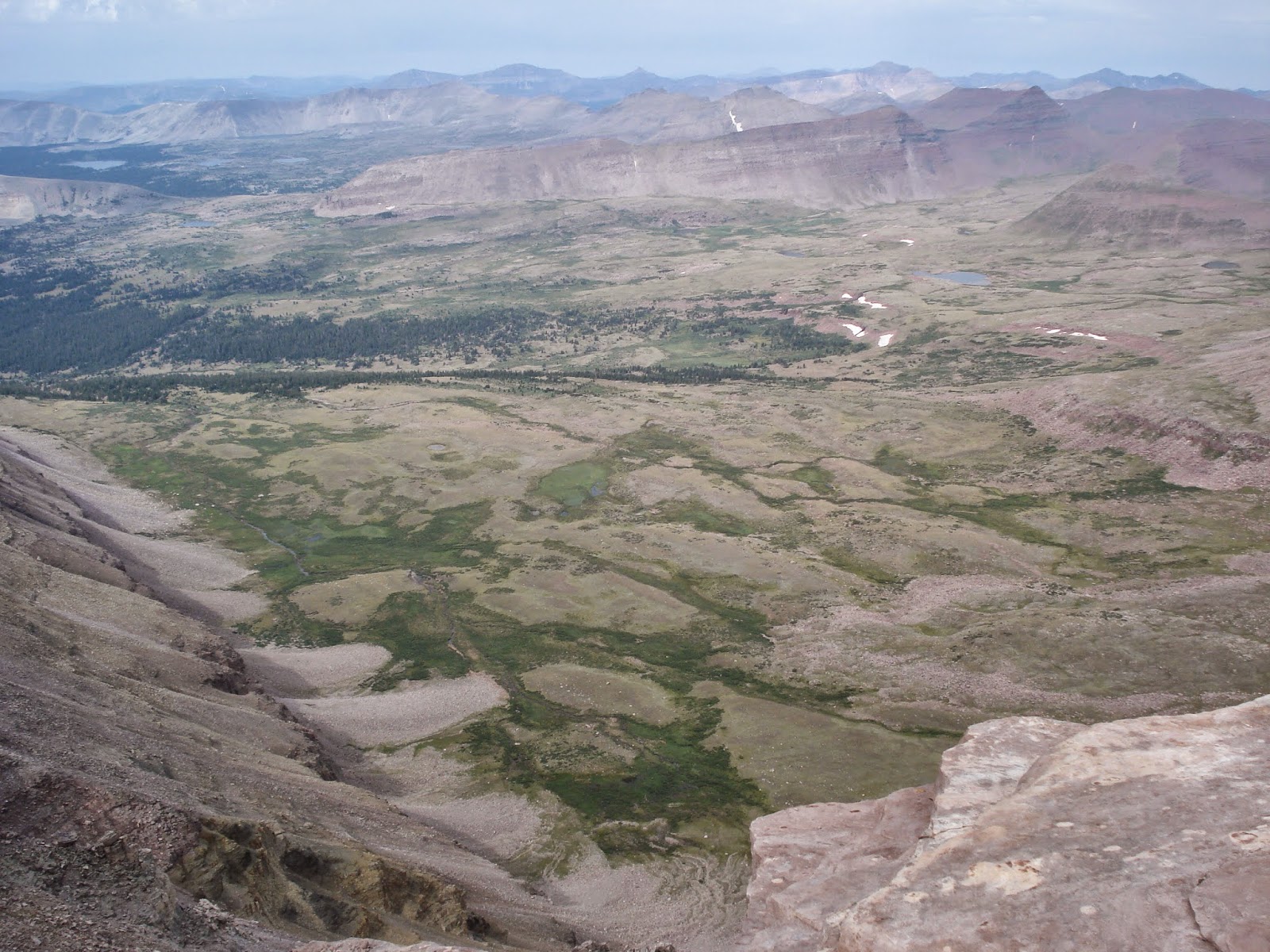 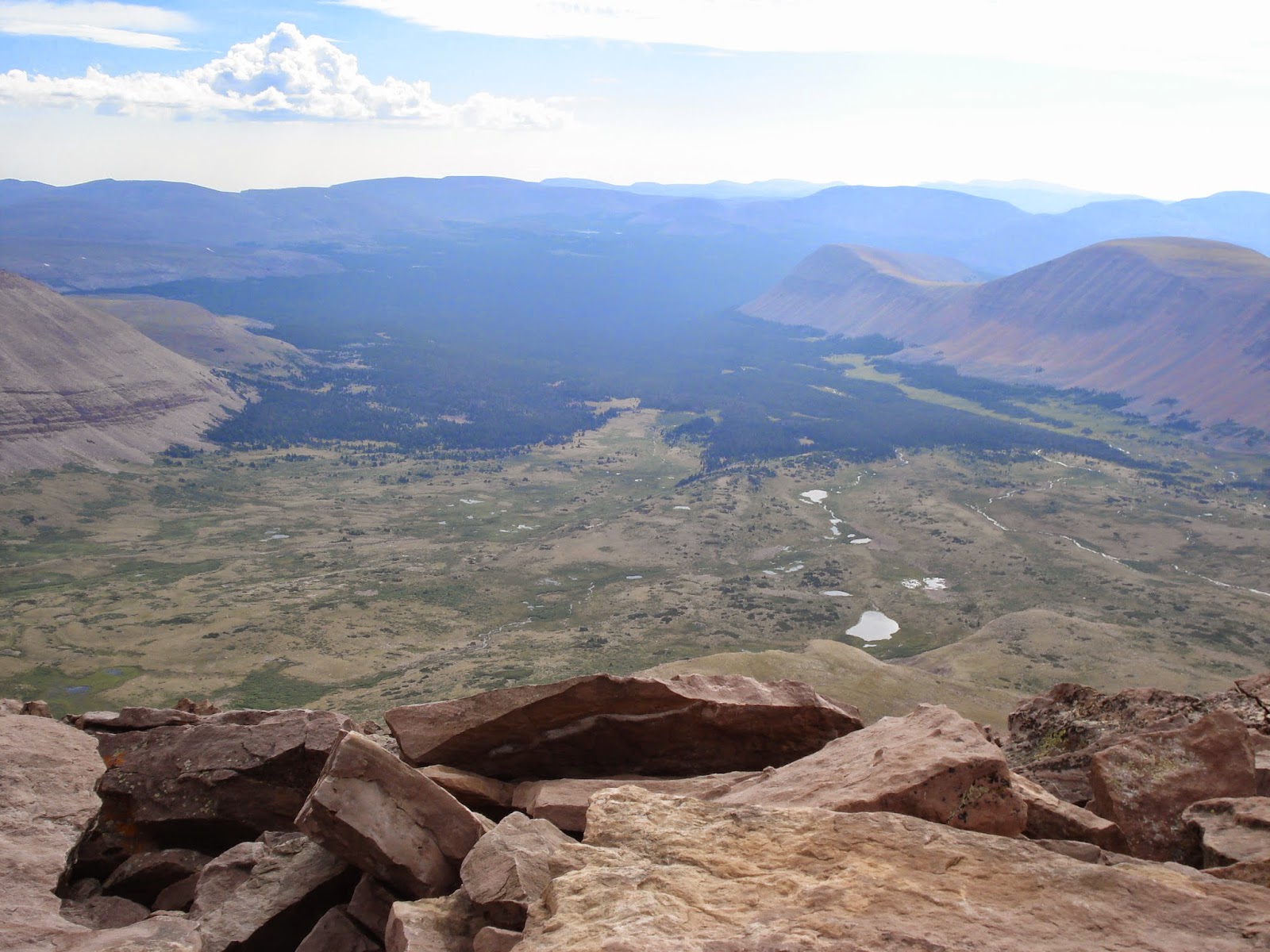 At 10:10 we headed down.  My legs were tired and down has never been my strength so it became a combination of butt sliding and rock hopping, mixed in with a little bit of whining.

As we rounded the slope I was as happy to see the top of Anderson Pass again as I had been to see the Kings Peak summit. Let's get off these rocks!

Skies were still clear and non-threatening. Heading back we met a lot of hikers, quite a few looking really tired.  We marched back up that gentle slope to the plateau (and its nasty-ass talus strips), and eventually the cairns to the shortcut.

Descending via the shortcut can be challenging to tired legs (steep and gravelly). These little steep spots are close to the top and eventually the path mellows, gently sloping down, right back to the big cairn at Gunsight Pass. 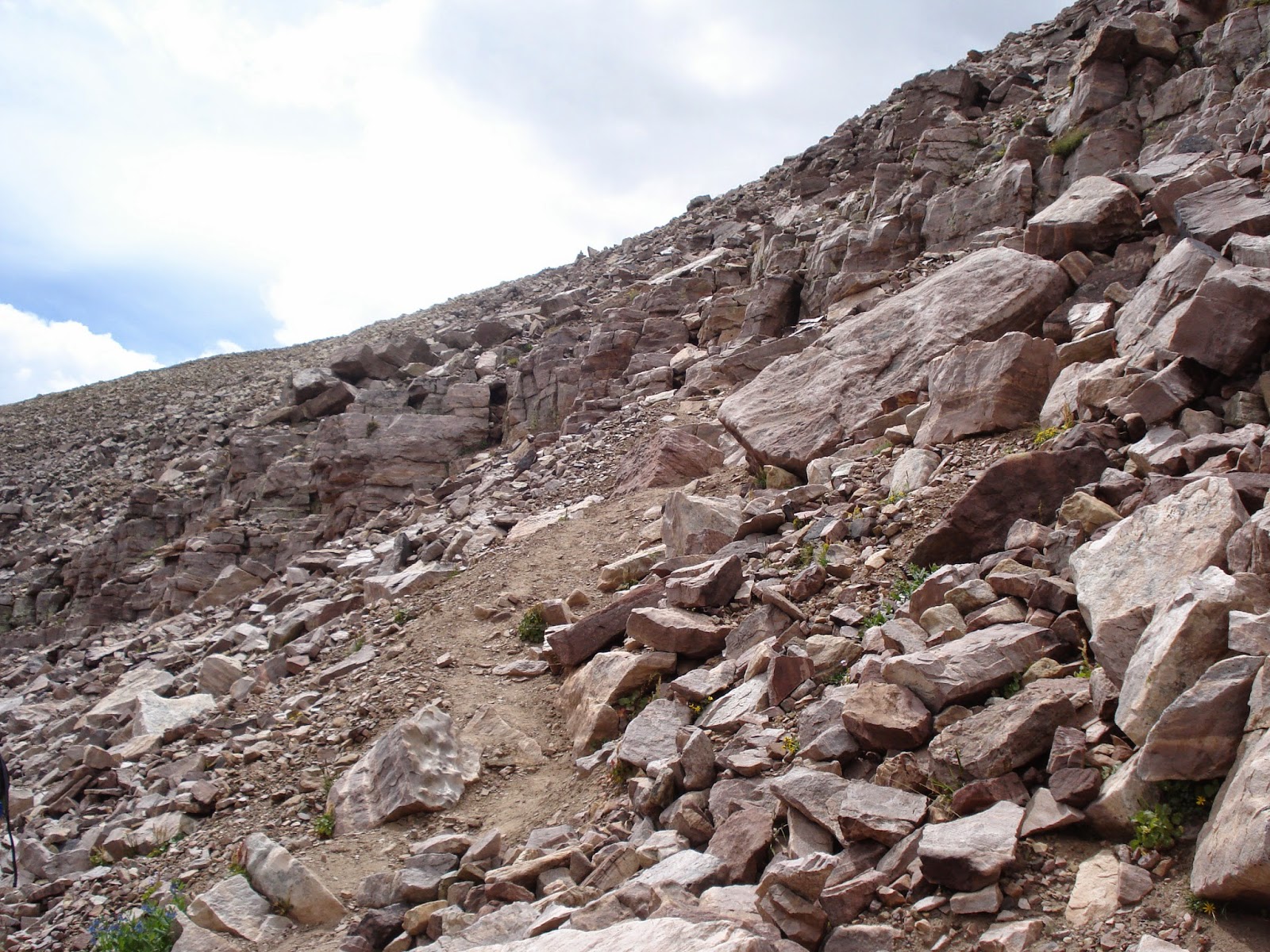 Once at Gunsight Pass we were home free. With no clouds in the sky we booked it back to the campsite, arriving at 1:30.  Rich and Peg welcomed us and we spent the rest of the day hanging out at Dollar Lake and celebrating.

The next morning we made the trek back to the truck.  Clouds started forming but temps were fine and winds were calm. It took us about three hours to get to the parking lot.


Ten minutes after we left the parking lot the rain started.  There's something so satisfying about beating the weather.

We headed back to Park City feeling victorious, looking for that celebratory draft beer.