Trailhead: This hike begins where the Long Trail crosses Route 242 at Jay Pass, 6.4 miles west of the intersection of Routes 101 and 242 in Troy, VT.  Parking is on the south side (left).  Long Trail northbound is directly across the street.
Tip: Wear gaiters, waterproof boots and bring rain pants.
Hiked with Rich, Rich and Joan.  Jay Peak and Big Jay are on the New England Hundred Highest list (a list I am working on) and the farthest drive of any non-Maine peaks on the list (213 miles, a three hour drive from southern NH).  Canada is just a few miles away and our cell carrier charged us international rates for data while at Jay Peak. We had to call to get the charges taken off our bill.
An event for work brought me up to northern NH and I'd convinced Rich to come with me so we could drive over to Jay, VT afterwards to hike "the Jays."  From Gorham, it was still a two hour drive.
We stayed at the Stateside Hotel at Jay Peak Resort ($109, a good value and as close as you can get to the trailhead). It rained overnight and we awoke to socked-in conditions and temps in the 30s.
Rich and Joan met us at the hotel and we headed up to Jay Pass.  There's plenty of parking.  I put on my winter gaiters; Rich used his ankle gaiters.


The trail crosses at the parking lot and it took a double take to find where northbound heads into the woods. It's directly across the street but a bit subtle.  The Long trail is very well blazed (particularly helpful when we were at the summit of Jay Peak trying to figure out where the trail continued off the ski runs).

We signed the hiker register and headed up the trail. Immediately off to the left is a blue blazed trail - Jay Camp.  It's a cute little cabin by the photos I've seen; we didn't visit it (an opportunity missed!).
﻿﻿﻿

The path is level for a few hundred yards and then heads up.  The woods were wet and there's nothing much to report on this stretch except one huge tree on the trail is growing horizontally, quite interesting. Stifle that yawn, it was HUGE and growing out from the slope, and deserving of mention.


Rich remarked after this hike that it offered so much variety. He's right.  After the usual rocky trail (and occasional earthy flat), we were treated to some angled rock which mixed things up.

We reached stairs that took us over water pipes (for snowmaking) and down a ramp onto a ski slope.


Up and down the ski trail we saw nothing; just a wall of white mist.  Things weren't improving weather-wise.

But.... it wasn't horrible and therefore hikeable.

Some hikers report going straight up the ski slope to the summit but directly across from this staircase are the blazes on a short rock scramble.  Up we go.

Ice cover shrubs poked at us as we ascended the rocks.  It was windy and very cold up top (this is summer?!) and we layered back up to weather the trek. 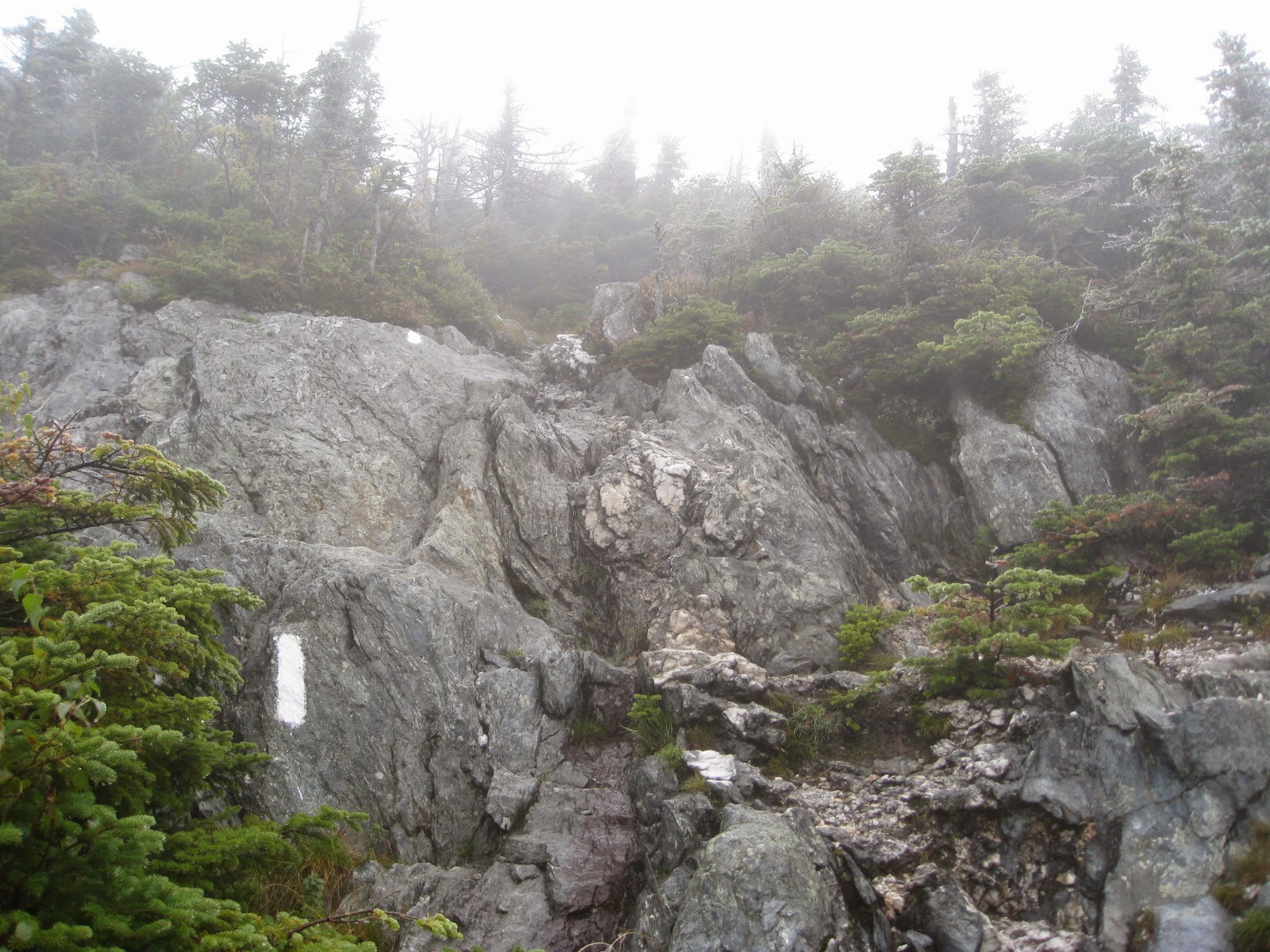 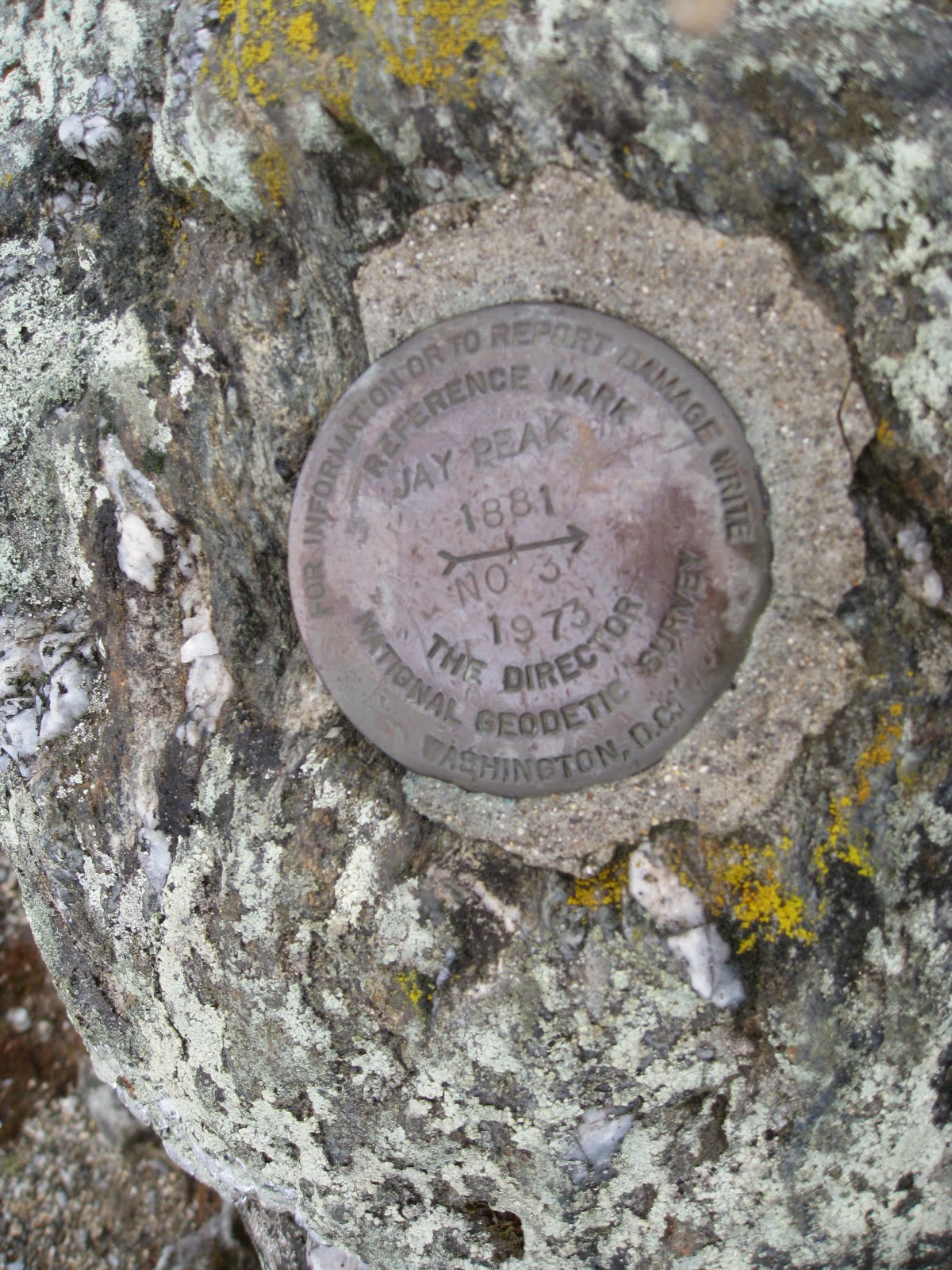 The summit area is complete with a staircase that descends to the gondola building and the Sky Haus Deli.  There we met a few hearty underdressed people who were pretty amazed we chose to hike in the cold weather. We in turn were amazed they were wearing flipflops.
How cool is it to get something hot and go to the bathroom halfway through your hike?  We sat down for a minute, ate, rearranged clothing (I put on my rain pants) and then headed out to Big Jay.


Past trip reports provide a wealth of information but I couldn't find a clear description of how to continue north on the Long Trail from the Deli and how to find the herdpath to Big Jay given the maze of ski slopes draping the mountain.

We left Sky Haus Deli, turned right and headed down a ski slope, quickly finding white blazes painted on rock slabs (in winter, just head down the slope directly behind the building).  We followed the blazes past the Tuckerman's sign until we were facing a fence (directly ahead).


It isn't immediately clear where the opening of the fence is (it's to your right facing the fence).  Go through the opening and follow the long trail a very short way (some say 30 paces, depends on your stride) to a very clear herd path off to the left. Hint: the Long Trail goes right and starts to descend right where this path starts.  This is a VERY CLEAR herd path so don't go down something that looks like an iffy path (we almost did), the entrance to this one is almost as nice as a trail.  The herd path about a mile long.

There are some significant downed trees in the beginning.  In 2007. this path was deliberately cut by vandals (article about it here) and it's quite evident at some of the wide areas.

Where to go is never in doubt as the path heads right toward Big Jay's summit with only one or two offshoots (and it's pretty obvious they are secondary paths).

Most trip reports tell tales of muddy conditions on the path.  Big Jay's mud is quite impressive. In some spots our poles sunk in over 10".  There are bushwhacks around the mud bogs but negotiating these areas will slow you down and you simply can't avoid getting at least one mud soaked boot.  My gaiters were thick with mud and Rich wished he'd brought his "industrial strength" pair instead of his weak little ankle gaiters.


There are a few rocky "ups" to let you know you are reaching a high point and I am quite sure on a nice day the views are scrumptious but all we could see are white and puffs of mist blowing past us.  And all we heard was the sound of icicles plinking as they fell on us or to the ground. Our packs got very wet from the mist, the occasional sprinkle and the overreaching spruce that tried to snuggle us in as we walked by.


The summit is an obvious height of land, distinguishable by a red litter strapped to a tree. There is a bracket next to it, where a canister used to be.  About 15 yards east of this area a small jar with a register hangs on a tree but we didn't see it (we weren't really looking for it).


We ate, took a few photos and headed back. The herdpath is very easy to follow up until a few hundred yards before the end where we got a little mixed up and had to do a bit of bushwhacking (very little).

We were back on the Long Trail heading south to the fence, and back on the ski slope we decided to turn right and simply head down toward the ramp/stairs that would bring us back into the woods and to our cars.  We met quite a few people coming up as we were coming down.

The six mile trip took us about six hours, longer than anticipated. Though we did hang for a bit on the summits and at the Sky Haus Deli, negotiating the muddy areas took more time than we'd imagined.

This would be a great winter hike (I could not find any restrictions for winter hikers on Jay Peak).

Posted by Peppersass at 5:30 PM No comments: