Trailhead: Appalachia,  located on US Route 2, 5 miles west of the intersection of US 2 and NH Route 16.
Hiked with Rich as part of our training for our Utah backpack in two weeks.  First we considered Galehead but the elevation gain wasn't enough (this would be our last conditioning hike before Utah), then Carrigain but that was a group hike on Sunday and the weather was iffy.
So we decided to hike Mt. Madison instead.  Who were we kidding?  The draw of Adams with its ridge and edges and beautiful ravines got the best of us. It was never in doubt.  When we arrived at Appalachia, we went right at the fork and found ourselves on the Airline trail.
I've hiked Mt. Adams in 2009 (see 2009 report) and in 2011 (see 2011 report).  The Airline trail is listed on the Terrifying 25 (a list I'm not working on but you may be!). We got to the trailhead late and made our way up Airline, which is surprisingly mellow before the steeps.

There is one junction on the Airline trail where the trail sign does not indicate you are still on Airline. Look up the trail to find the Airline sign.  Other than that there's plenty of signage.

Since both the Airline and Valley Way trails feed into the Appalachian trail (Gulfside), the blazes are blue.

As the trees get shorter the trail levels out (around the Scar trail junction) and the blazes lead you out of the trees and onto the open ridge.  The surroundings are surreal  - with Mt. Adams' summit off to the right, and a steep gray ridge rising up to meet it.
Relax. It's fun.  It's rugged but quite doable.  The Airline Cutoff intersects Airline trail.  Hop on it if you plan on visiting the hut first but (warning) going back up it to get on to Airline trail will add an unwelcomed 300' to your hike.
The rock hopping starts at the junction of Airline and Gulfside trails.  Heavy, rough, angled glacial boulders are the trail here and following the rock cairns and blue blazes is a tedious task. The summit is up ahead so its not like you're going to get lost. The trick is to find a path that doesn't bite your ankles or toes.  These boulders are very sticky, not a bit slippery in wet weather (ice however, is quite a different story).
As if to throw you a bone the path becomes more defined and forgiving at the first and second cairns, which mark the path to the beginning of Mt. Adams' summit cone.  Rock hopping continues, with bits of trail improving here and there (dirt and grass) to break up the monotony  - try to stay off the fragile alpine vegetation.  The slowed pace and need for focus is renewing, plus it helps to see the summit....right.....there!


Two or three last pushes up the rocks and we were on the summit, which was crowded today. And buggy.
There is no USGS marker but there's a pin at the top, and the trail junction sign.
The view was hazy and occasionally a gray cloud would engulf the top. But the wind was calm and we were comfortable in short sleeve shirts.

It was time to head down and visit Madison Spring Hut. Gulfside trail dips down to the hut as a gravelly slope. 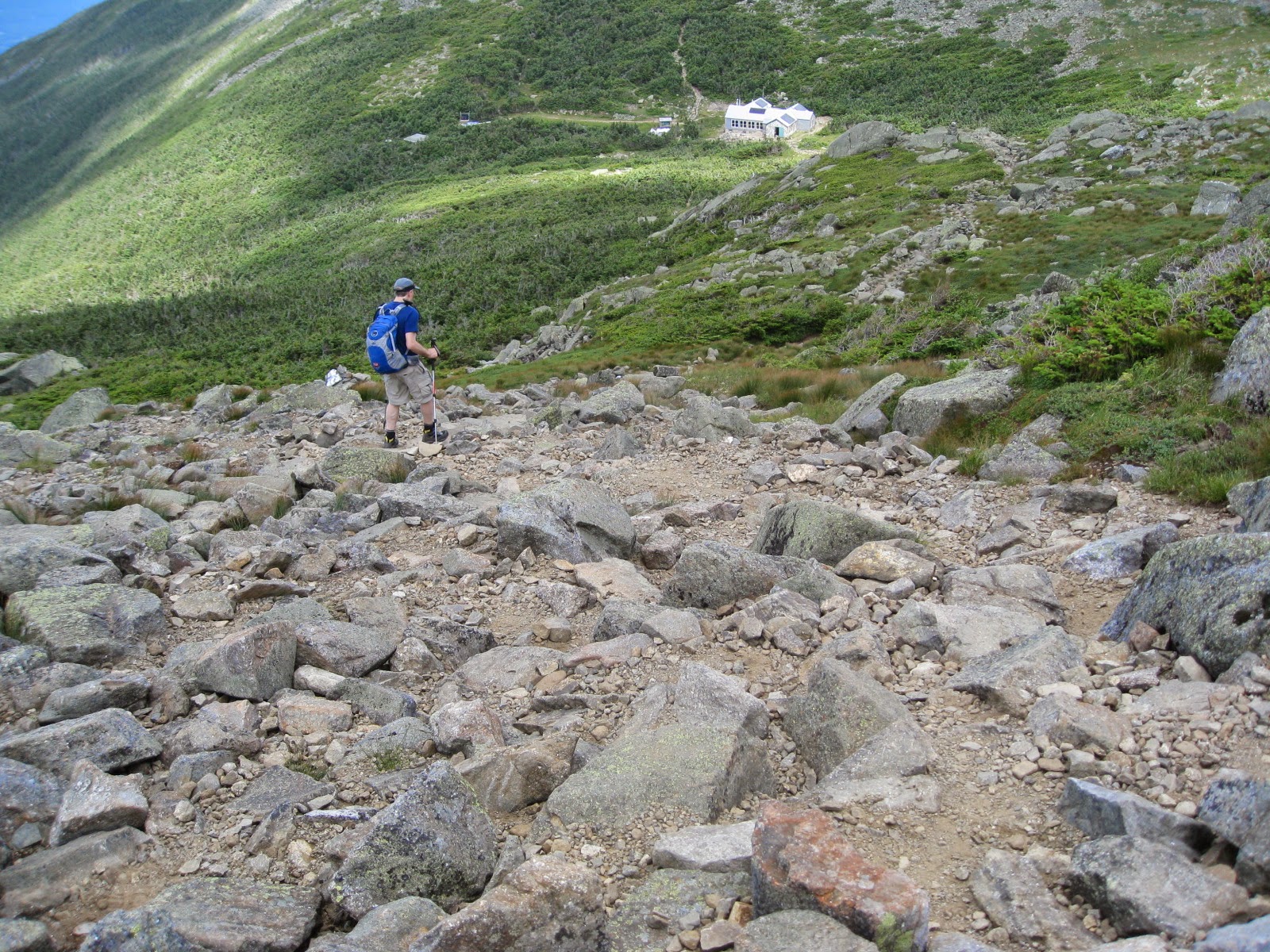 The hut was renovated in 2011 and inside is airy and clean. There were many happy people hanging out on the deck and at the tables inside. We grabbed a lemonade and chatted with the staff.   Around 3:00 we headed down to the car via Valley Way trail.


We met the hut staff coming up with supplies (five of them) and that is about as exciting as it gets on this trail.  We were down having a beer in Gorham in no time.


This is such a rough and beautiful hike, and tough but worth it if the views are good. If the weather is iffy, do another peak (you never know what the northern Presidentials have in store for you!).
Posted by Peppersass at 5:05 PM No comments: