Mileage:  3ish miles (up and back)

Note! Much of the area described below may be overgrown since the writing of this trip report.  Logging operations prior to and since 2014 can have a dramatic effect on the terrain and condition of roads. Recent reports indicate a large amount of logging slash covering areas described below and parts of the drive in not passable by vehicle. Check current reports for the latest conditions. In the past I've used newenglandtrailconditions.com for recent information.


Route 5 out of Bethel toward Andover, turn right onto ME 120 and in .6 miles turn left onto South Arm Road.  The right turn onto Elephant Mountain Road is about 10 miles down South Arm Road, just after crossing the signed Clearwater Brook (you will drive past the AT crossing). It takes one hour to reach the parking area from the center of Bethel.

DeLorme does not show the shape of this road correctly, it isn't straight.  After turning onto Elephant Mountain Road bear left at .4 miles, and at 1.1 miles bear right (your route will resemble an inverted ”V”).  We met several cars on this road, hunters probably.


Hiked with Bill, Jill, Ken and Rich on this very foggy day.
As reports indicate, the way to Elephant's summit involves a logging road, skidder roads, herdpaths, and some bushwhacking.  Ken and I had friends' GPS tracks for reference.
We parked in the clearing (road too rough to go any further). A pickup truck was already there. Since it was hunting season we wore orange but this vehicle belonged to a hiker (whom we’d meet an hour later).
We headed up about 9:30, hoping the rain would hold off (it did).  At the first cairn we took a left.

We'd received advice to follow the road to the cairns and stay left at the forks so we wouldn't accidently summit the northeasterly peak. (We wouldn’t even come close!)

Because we kept left at all intersections we lost the herdpath often.  We never reached the col, never took the "paths around the blowdowns," never saw the marshy area or boundary markers described in other reports, skirted one spruce wave and navigated easily through the other.
Our left at the second cairn took us on a herd path that cut left and into the woods (well trodden, it appeared to be the route of many who started their bushwhacked at the second cairn).


It didn't take long to lose that path. And so the bushwhack began.

Paths would come and go.  We found it, then lost it, then found another.  Lose, find, lose, find - no, just thought we found it…..hey, check over there.

Ken and I gave up on following our GPS tracks and settled for just heading in the same direction as the tracks.


We popped out onto the upper skidder road, on the edge of a significant spruce wave, which we avoided by going right and crossing the road. It was clear we were starting up the bump to the summit.
﻿﻿﻿


The terrain steepened and we followed herdpaths til they petered out, then looked for others.  Going wasn't bad, though the woods were soaked and our gloves as well (cold hands).  We met 1SlowHiker heading down and chatted for a bit.

We reached several rock ledges and went left around them on the way up, right and down on our return trip.


The pace quickened as the herdpath became more defined. The woods are so mossy I expected to see a hobbit. We reached the second spruce wave.


It took a few minutes to find the herd path, which is on the right side - through the spruce.
﻿
﻿
﻿﻿

On the other side of that spruce wave is herdpath nirvana!

No mistaking where this path goes and in no time we were at the canister, which opened easily. 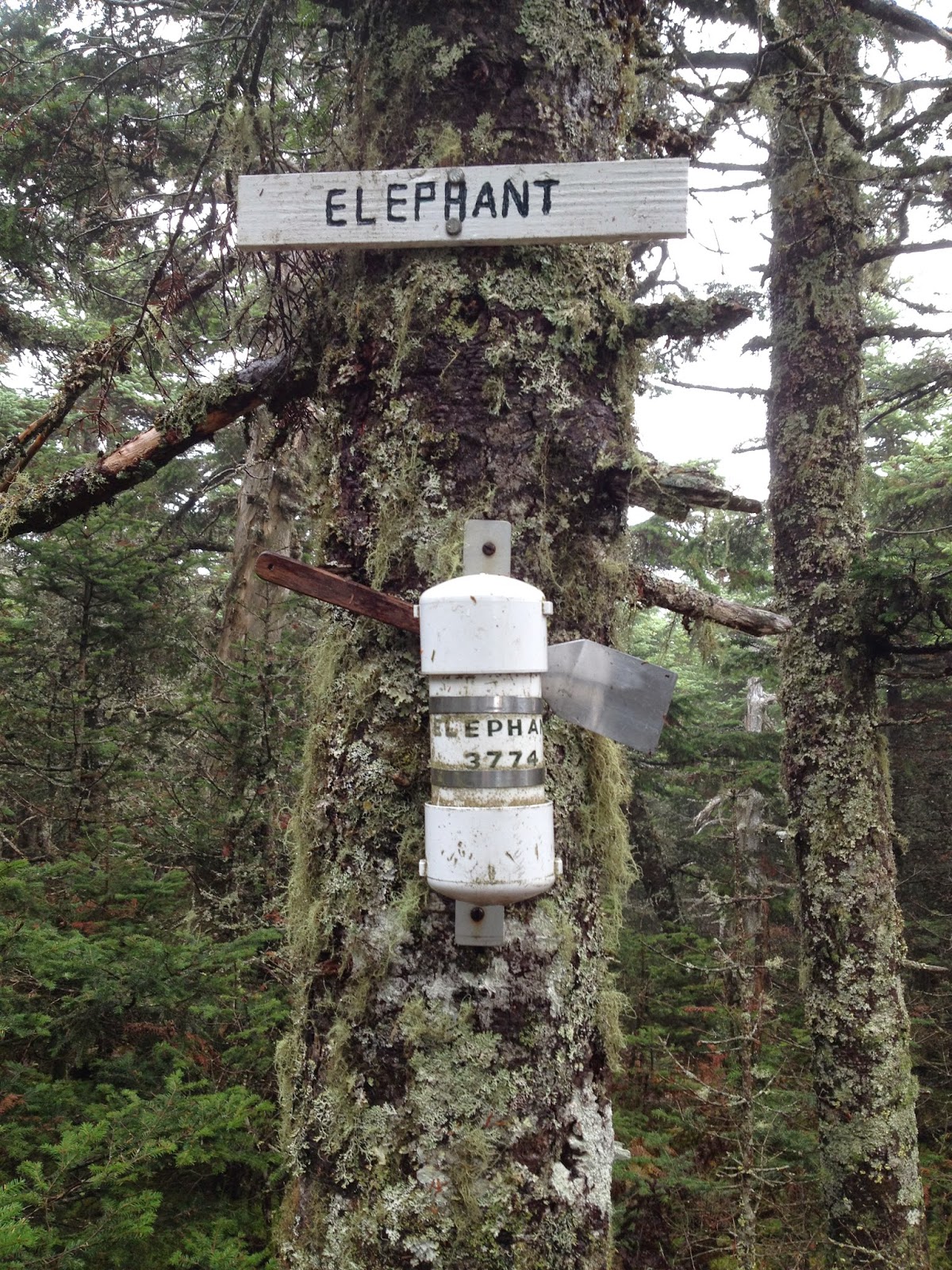 We struggled to get a group photo but the camera, already quite wet, wouldn’t sit steady on slippery branches.  After a quick bite to eat, we headed down the path and easily found it on the other side of the spruce.  We placed our steps carefully as we descended the ledges and proceeded to go down the mountain.


As it got less steep it wasn’t as clear where to go so we picked our way down the gentle slope.
﻿
﻿

When we hit a wall of spruce I went left through a small group of trees, popping out on a skidder path. I yelled to the group to come check it out.


The path was so well established it had to be the herdpath we could have taken on the way up to avoid some of the bushwhacking.  No matter, the walk in the woods was fun, not too treacherous. We headed down this path to the cairns.
Once at the car we took off our wet clothing and boots and headed to Sunday River Brew Pub for a beer and garlic fries.
1 hour 40 to get up, 1 hour 10 to get back down.
﻿﻿

Posted by Peppersass at 5:01 PM No comments: