Trailhead: Route 302 - 6 miles west of Bartlett, NH - just across from the Notchland Inn.

We've hiked Mt. Crawford before (see previous report). It's a local favorite offering maximum views with moderate distance and elevation gain.  If you're hiking Stairs Mountain or Mt. Resolution, it's on the way so you might as well take the short spur (.3 miles) and grab Mt. Crawford too.

Today I hiked with Rich, Sandy, Joe, Becky and Mark.  We stayed up in North Conway Friday night and awoke to an outside temperature of -17°.

But a warming trend was on its way and after a relaxing breakfast, we headed out to the trailhead. 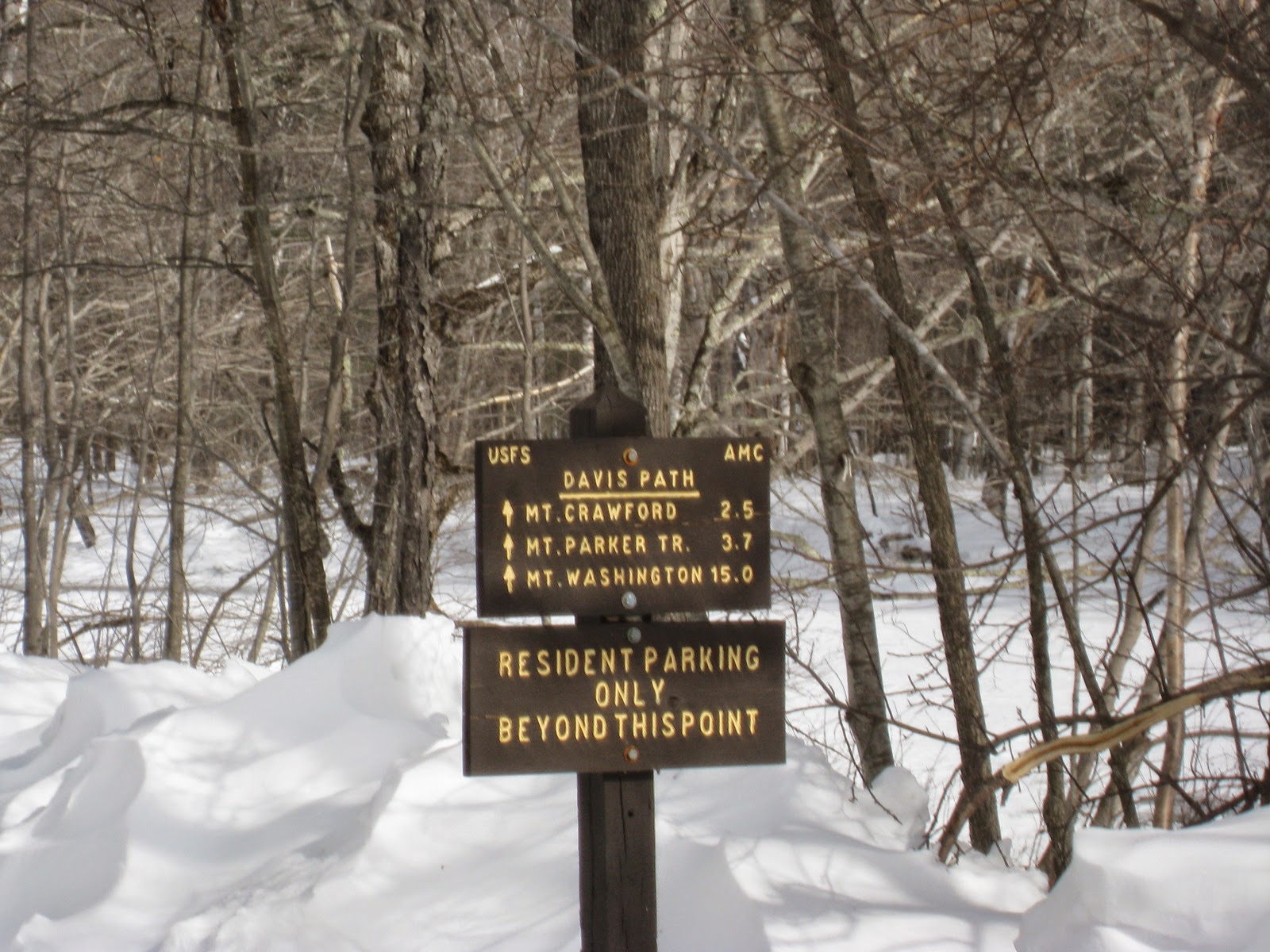 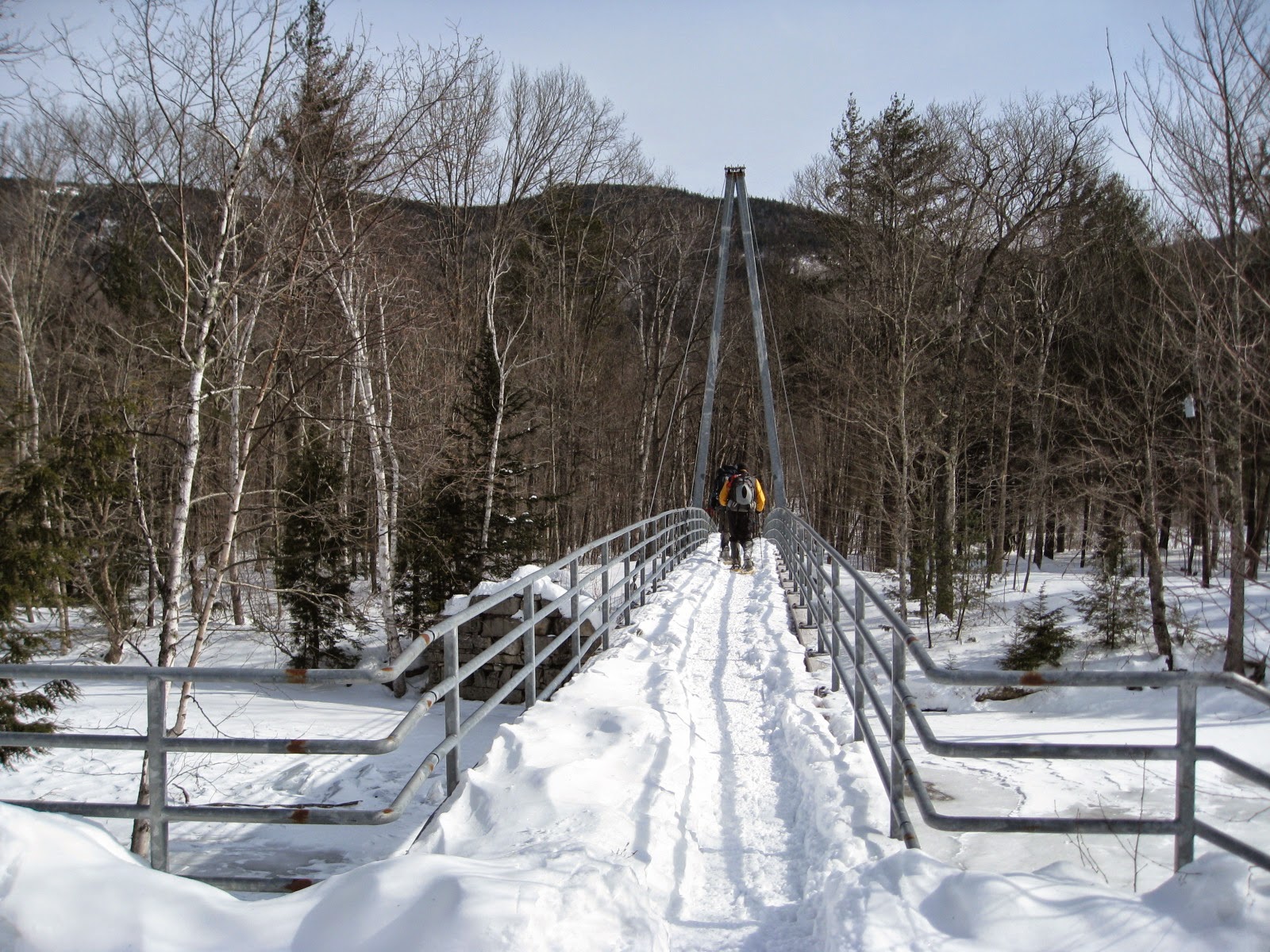 The day was warming up and so were we as we made our way up the path, which starts out relatively flat but soon varies to include wooded side hill ascending and open slabs.  Today the path was broken out - good thing as we didn't see any blazes on trees to help us find trail against a very white landscape. 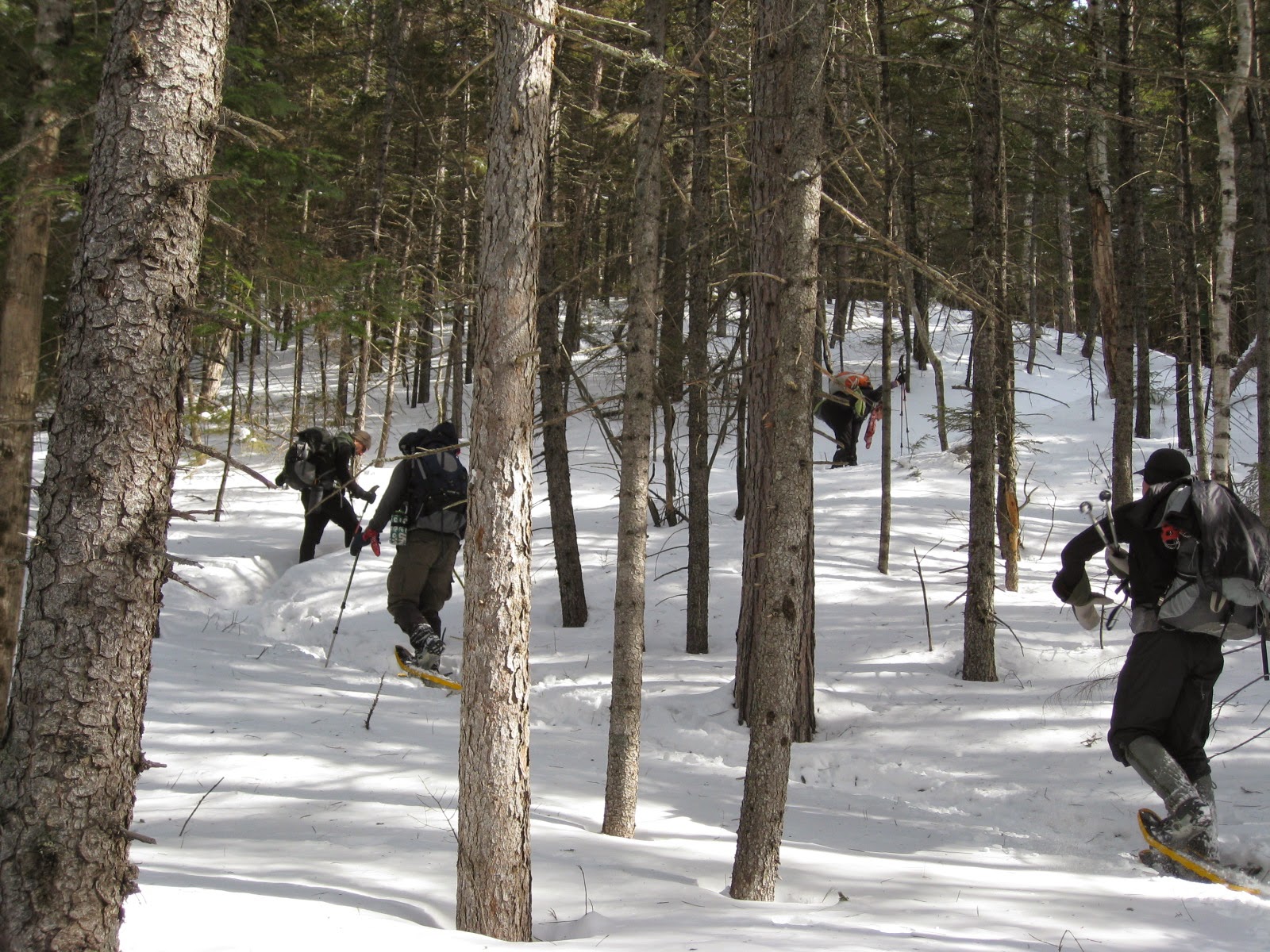 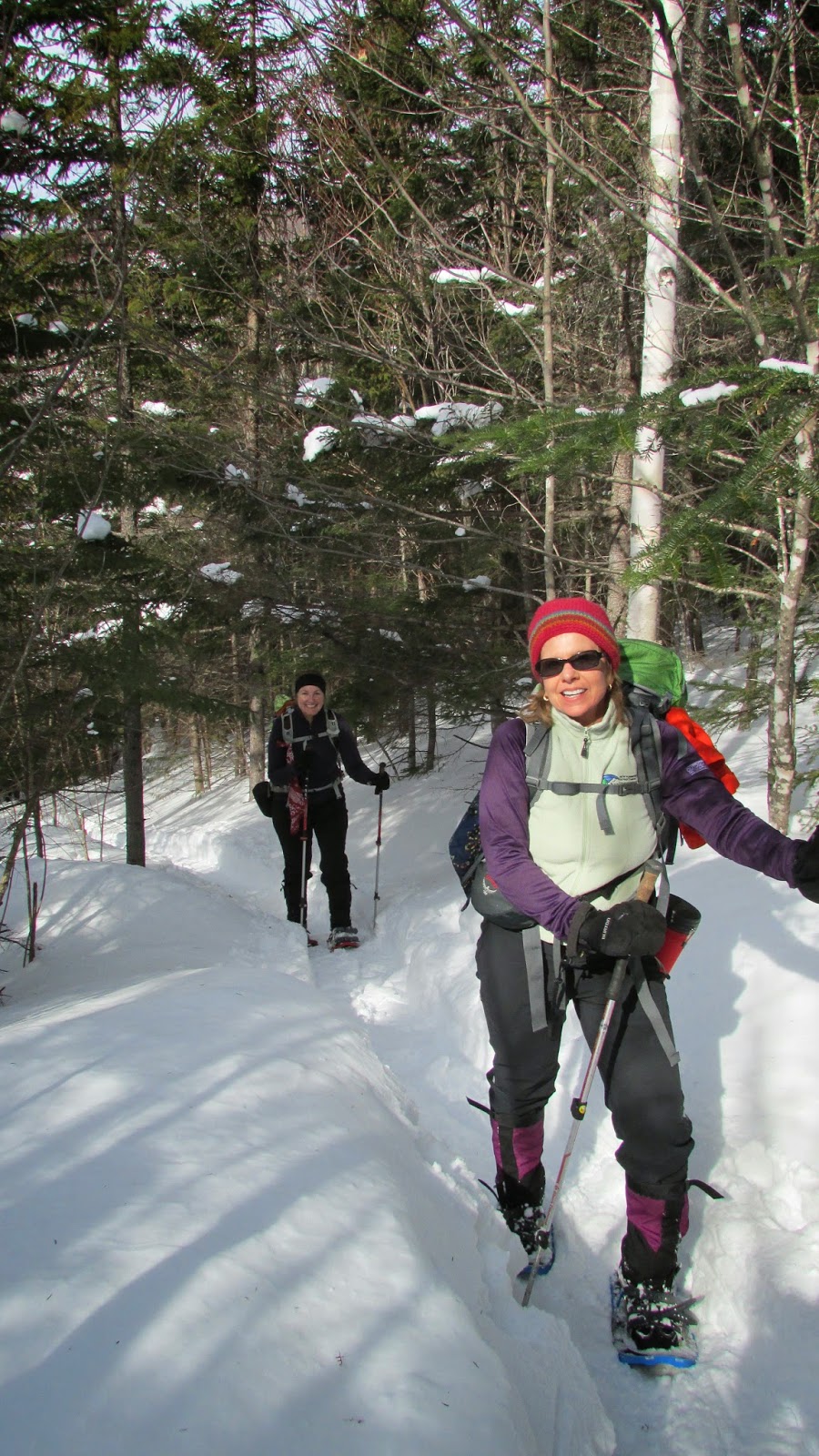 The footing is good and the trail never gets steep, just a continual uphill climb with very few flat areas.

It wasn't long before we reached an opening in the trees.  The sun was weak (more snow predicted) and sky a pale blue but we were wowed with a sneak peek of the views to come!

﻿
Soon after, we popped out onto the overlook and took in the expansive view.  The wind had picked up, shortening our stay there. We pressed on.


Back into partial woods the trail meanders in and out of trees and open areas (snow covered rock and slab).  At one point there's a clearing up and to the left but the trail goes right, back into the tree cover, skirting the eastern slope of the summit.

The views are tremendous and soon we arrived at the summit spur. There was evidence of hikers continuing on the Davis Path, probably headed for Stairs Mountain.  We went left and up the blank slope and into the trees. 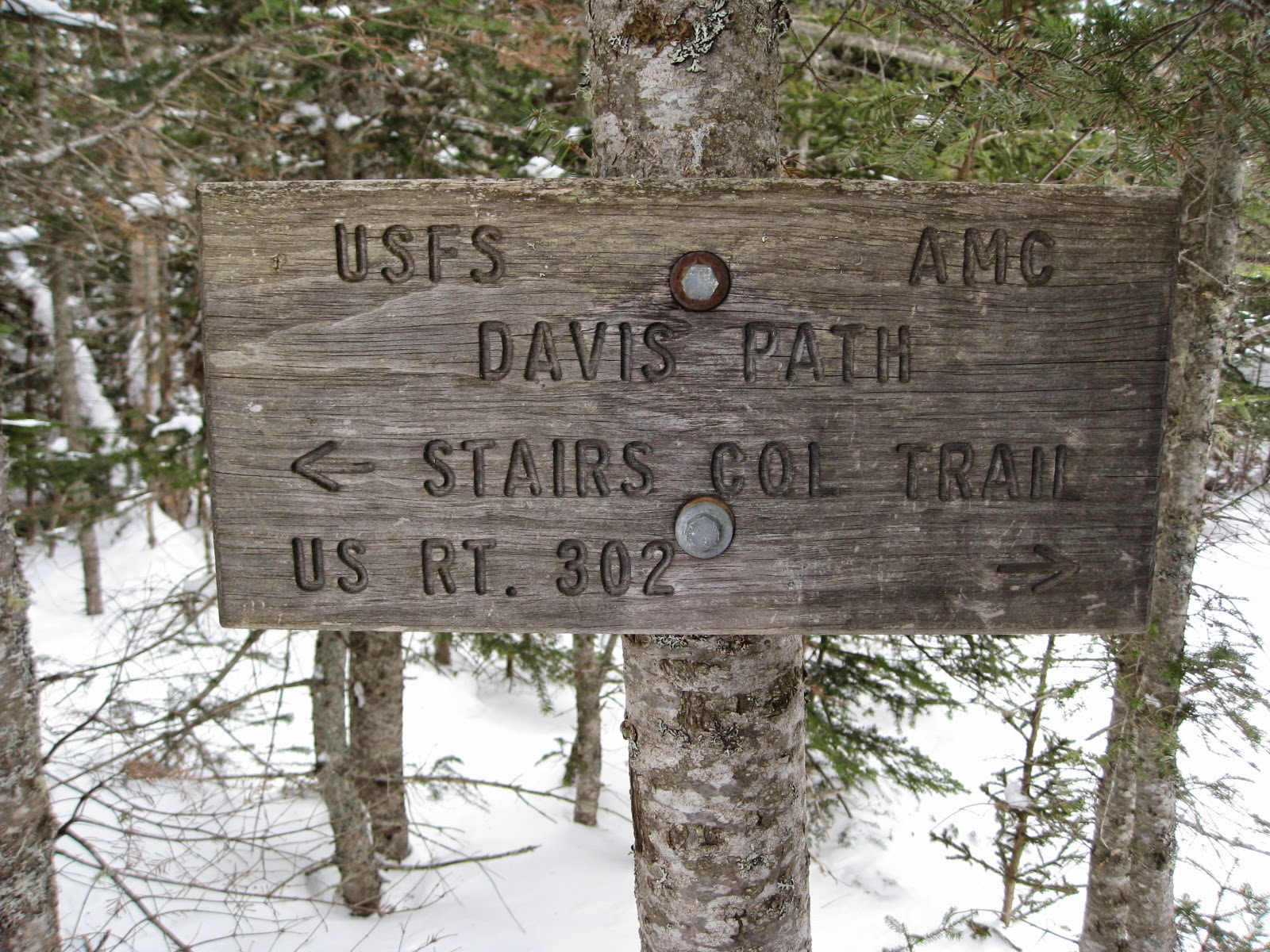 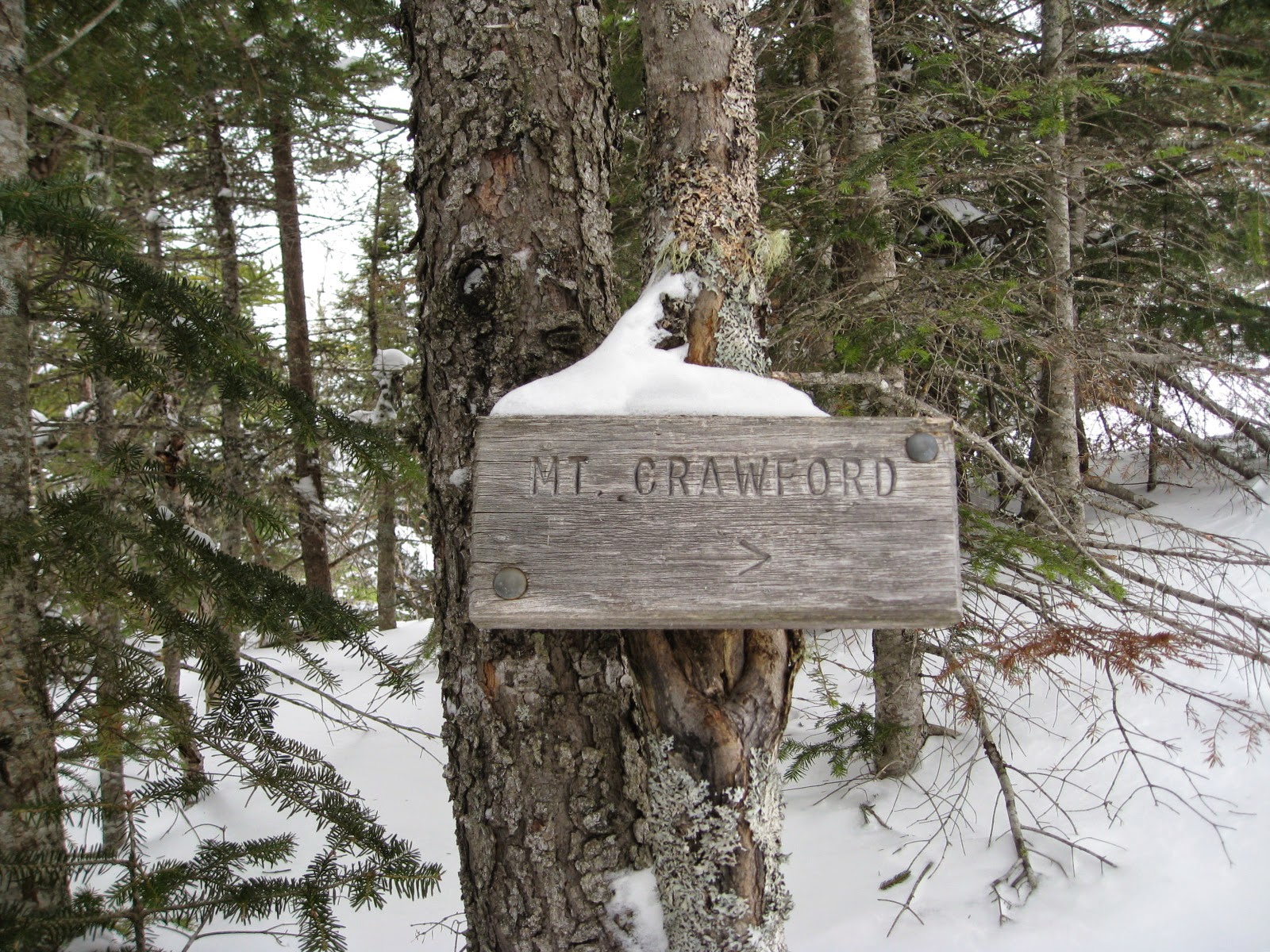 After hiking up the slope (slippery in the soft snow), we were back into trees for a bit and wound up at the cliff just below the summit.  It was icy today and we went left to avoid it.

The view of Mt. Washington was incredible; so clear we could pick out the summit buildings. But the snow was coming and a cloud came in overtaking our view.


The wind was nasty but tolerable for a summit shot.


On the way back we blew down the trail and back to the car, managing to avoid a group of sledders.

We got back to our cars as the skies got gray and by the time we left The Moat it was snowing quite hard.  A good day out!
﻿


Posted by Peppersass at 1:31 PM No comments:

Email ThisBlogThis!Share to TwitterShare to FacebookShare to Pinterest
Labels: 52 with a View


Mileage:  9.2 miles (RT)
Elevation gain: 2,950'
Trailhead: The Nineteen Mile Brook trailhead is located on Route 16 several miles north of Pinkham Notch Visitor Center.
Hiked with Rich, Sandy, Norm, and Charlie.  We slept at Norm's condo at Attitash Mountain Resort.  There's nothing like getting up at a reasonable hour to drive 25 minutes to the trailhead (sure beats waking before 5 a.m. for a two hour drive).
We'd all hiked South Carter before (see previous report), but this would be my first winter hike to the summit and I was looking forward to ridge walking on the Carter-Moriah trail.
The week's weather and trail conditions were why we decided on this particular peak.  A lot of snow was dumped in the region (three significant storms in eight days) and the trails to South Carter were more likely than others to see a good amount of traffic before Saturday morning.
We wanted to hike on previously broken trail.  We've all done our share of trail breaking but with the amount of fresh snow (2+ feet and more) we knew our little group didn't have the force needed to bull up the 4.6 miles to the summit in unbroken conditions.


The loop up the Imp trail to Middle and then South Carter was an option, but none of us wanted to get up any earlier than we did.  As it was we were a little late and wound up on the trail about 9 a.m.


Nineteen Mile Brook trail was well broken out.  All water crossings and potential icy spots were quite covered with snow. At the brook the flowing waters under the ice gurgled, sending shimmering ripples in what open pools remained.  We got to the junction of Carter Dome trail in no time.


The Carter Dome trail was also well tracked, with two-feet snowsides.  The trail thickened as we trekked the 1.9 miles up to the next junction; the snow was deeper, trail still broken but less defined.  Our snowshoes moved a lot of snow.

This trail meanders and never really gives a kick. Its switchbacks mellow out the grade, though today the narrow path had us hugging the mountainside on our ascent, with an occasional slip of the right foot down the steep.

Out came the caffeine chews to add a little more oomph to our steps.


It was great to see the Carter-Moriah trail junction up ahead.  We were on the ridge! Several other hikers milled about on their way to or from one of the Carters.  After a break we dug in to that final .8 miles to the summit of South Carter.


The trail dips down and, after climbing over some branches, we were following the narrow path toward South Carter. We were on the Appalachian Trail which meant plenty of white blazes to follow (some more, some less depending on where you are on this trail).  The broken-out path was true to the AT.


It was very cool being up on the ridge in February, with short, stubby trees and glimpses of views.  Tree branches drooped low with heavy snow, making for a dreamy backdrop. Occasionally we had to push these icy branches aside to make our way through.


The unmarked summit is .8 miles from the Carter Dome/Carter-Moriah trail junction, with just over 400 feet gain.  We were tired of slinging snow but the ridge was just so beautiful.

It wasn't long before we reached the steep just before the summit (a definite incline after a half mile of relative flat).

The South Carter summit is pointy, that is, it tops out - you can't miss it!  As you reach the high point, a cairn (tiny one) is off to the left in a small clearing.  Should you go by it you will immediately start descending.  Today the summit was a trampled area with a shivery little cairn off to the left.
﻿


And, it was a busy area!  Several groups arrived at the summit as we were putting on our jackets and getting ready to head down. There were dozens of hikers on the ridge today, enjoying the woods and weather (cloudy, with just a lick of wind).

We descended the steeps and in no time were back at the junction. We met several late starters, contemplating turning around.


We were back at the cars just before 4 pm, more than ready to get rid of our snowshoes.  A hot meal and beer at the Red Fox Bar and Grill awaited.

As much as we can't wait to get back to the snow on the ridge (Carter Dome and Middle Carter are now calling to us, after all), this hike was more work than anticipated.  Still, nothing beats a beautiful trek in a snowy forest!

Posted by Peppersass at 2:22 PM No comments: