Trailhead: I-93 N to Exit 26 (Route 3A) to Route 25 (roundabout) to 25A west (left turn).  About 10.5 miles later you will see Quinttown Road on the left.  On Quinttown Road travel 1.8 miles (parallels brook), turn right and cross a bridge and bear right at the "T." Road twists and ascends (hairpin turn); there's a small parking area on the left (2.6 miles total from Route 25A).

Smarts Mountain is on the 52 with a View list (a list I'm not working on but you may be!). The firetower is closed.

Hiked with an AMC group today.  This is the second time I've hike Smarts Mountain, though my first on the Daniel Doan trail. 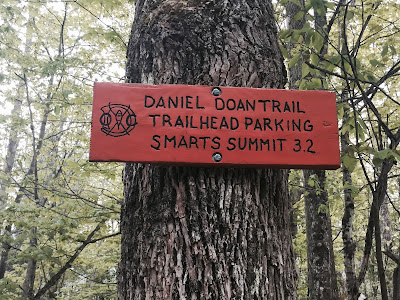 Trail reports tell of wet areas, erosion, and slippery rock. This is exactly how we found it. Even though New Hampshire's been quite dry weatherwise, parts of the trail were invaded by running water, and slimy rock and rotted wood are prevalent.  But we had a good group today and everyone was looking forward to a new experience.


After a long, mellow road walk, we started ascending.  This trail needs some work, particularly on the steeper sections as blowdowns, rotten stumps and serious erosion had us bushwacking off trail often.  There is a short reroute about a mile in, so hikers can avoid a particularly nasty section. We missed it, seeing the sign after we'd trekked over it. 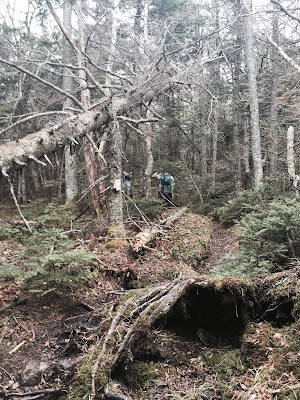 The trail never gets very steep and we are in the trees the entire time, barely catching glimpses of view through the trees. The slippery rock slabs were easily negotiated; a good day in the woods.  We reached the firewarden's cabin in no time where we picked up the "J" trail (AT). 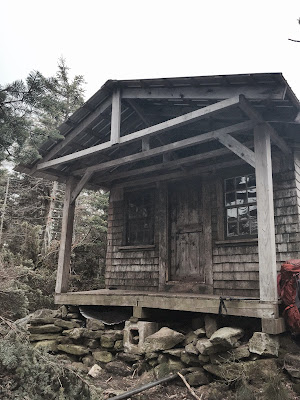 As we continue on, the trail got confusing.  We reached the sign (shown below).  Straight heads to the summit of Smarts Mountain and the fire tower (rickety, now closed).


The fire tower is a short walk from this sign.


The group went left of the sign and wound up on the Clark Pond Loop (a mistake).  The loop trail is in rough shape, riddled with blowdowns. We saw a large orange sign which read, "You are not on the AT!" (Apparently we aren't the only ones to make this mistake.)  So we backtracked and finally found the left turn to the AT (our way down). A huge downed spruce partially blocked this left turn.

Before we realized we'd missed the firetower, we were heading down a sweet, defined, well traveled trail: the Appalachian Trail.  There are some blowdowns but this trail is such a pleasure (compared to its jealous stepbrother the Doan trail).

As we descended the woods got brighter, more open, and the trail leveled.  We crossed a worn road and wondered if it was the road back to our cars (it wasn't) 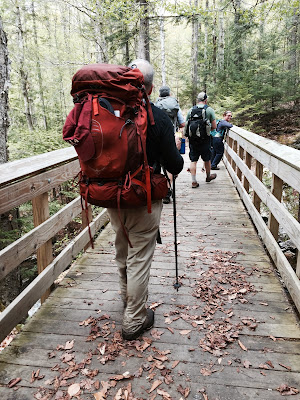 We then crossed Jacob's Brook and shortly thereafter came to a nice road that led us back to our cars.  We'd been on the J Trail since the cabin.

There's excitement in experiencing new trails and this experience was quite different than my last trip up Smarts.
Posted by Peppersass at 7:15 AM No comments: