I'd hiked Mt. Liberty in 2009 as a traverse with Mt. Flume on the rainiest of days (see previous report).  Liberty seemed like a nice peak to revisit. And besides, I just might be looking at doing the Trailwrights list, which requires each peak to be hiked individually (which means I can count Liberty or Flume from 2009 but not both so I'd have to do one of them again).

Not a soul was on the path but I met several hikers at the trailhead. They were excited (as was I) to be hiking Mt. Liberty on a gorgeous day.


The path starts out mellow with a few ups but the serious climb doesn't begin until the junction of the Flume Slide trail, .6 miles in.


Typically the trek to Mt. Liberty is paired with a visit to Mt. Flume, with those more adventurous opting to do a loop up the Flume slide and down Liberty Springs trail. The Flume Slide trail junction is muddy with evidence of bog bridge construction - it sees a lot of traffic.  I continued on.

The trail steepens - a healthy "1000' per mile" steep to get the heart rate going and accelerate the feeling of ascending.

There are a few water crossings; only one required thought before picking the route across.


The trail is in great shape and well marked. There are rock steps in some areas, blended in nicely with this wonderfully steep terrain.

The Liberty Springs Campsite is located 2.6 miles from the trailhead - no more, no less. Prior reports indicate this "feels like it takes forever" to get there.

The summit is a short .6 miles from the campsite. (Once you get here, you've done almost all the work!)


Had something to eat and drink by the caretakers tent and then headed up toward the junction of the Franconia Ridge trail.


At .3 miles the Franconia Ridge trail junction comes up quickly.  Left at the junction would take me north to Mts. Haystack, Lincoln and Lafayette.  Not today though, I went right.

Immediately I am in somewhat open woods with peeks of view on both sides - clearly on the ridge. This is your first glimpses of how high up you are  - just over 4,000'.


After a short incline the trail rises up and onto an outcropping, where you follow the blue blazes over rocks and past drop-offs to the massif that is the summit.


From the summit the view of Cannon Mountain and the Kinsmans is breathtaking. (Last time I was up here wasn't like this!)

From the top I could hear motorcycles below echoing off the rocks in the Notch (it's Bike Week in NH).

The USGS summit marker is on the far tip of the rock just before the dropoff (look at the edge of the ledge!).

From here many people continue on down into the col and to Mt. Flume. But I just took a few photos and headed back down to the car.

The trail was lively by now and I met a lot of people coming up, many asking how much farther :).  I got down to the recreation path and back to the Basin parking lot by 1 pm, in plenty of time to hit the outlet malls in Tilton.

Posted by Peppersass at 5:31 PM No comments:

Trailhead: The Nancy Pond trailhead is in Harts Location, a few miles from Attitash/Bear Peak ski area, on the west side of US Rt. 302. It's approximately 2.8 miles north of Sawyer Rock Picnic Area (past Bartlett Village if you are coming from North Conway). There is space for a few cars.

Hiked Mt. Nancy today with Sandy and Joe.  Originally, Sandy wanted to hike Horn and Bulge as she is working on the New England Hundred Highest list and has been in a yank to cross those two off.

But I was lazy and didn't want to drive up to Berlin. Showers were predicted so I suggested good old in-the-woods-no-slippery-slabs Mt. Nancy (also on the list).

Named after Nancy Burton, whose frozen body was found in Nancy Brook in 1778, Mt. Nancy is just 74' shy of four thousand feet.  The summit offers a fine view of Mt. Washington and other Presidentials.

The hike up to Mt. Nancy's peak is a ten mile adventure of alternating flats and "quite steeps" - with many bog bridges. But the rewards are numerous: a cascade, two ponds, and an amazing view of the Twins and Bonds - and Mt. Washington.

I'd hiked Mt. Nancy five years ago on a hot, humid day and what we thought was going to be an easy but long hike damn near killed us (read previous trip report). I was curious to see how tough it would be on a cooler day.

We arrived late, about 9:30, to find two other vehicles in the lot - pretty empty for a Saturday in June!  I brought water shoes for the bigger crossings, which were rushing, but was able to rock hop them.  Nancy Brook is littered with downed trees, as noted in 2011 but now more-so and you can see where Hurricane Irene caused massive flooding in this area (the storm devastated the Sawyer River/Nancy portion of the Pemigewasset wilderness).

It still surprises me how rugged the terrain is to Nancy Cascades. Someone strolling up there in sneakers or sandals would have to really want to see the Cascades to make it there. Sandy remarked that she thought the trail was going to be more like trail to Arethusa Falls (pretty much what I was thinking in 2011).

The Cascades are more beautiful than I remember, shimmery, elegant. We stopped for a few photos. 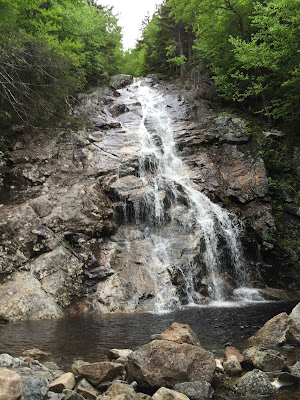 After the Cascades the trail gets quite steep and, when you top out, bog-bridgy (Joe counted over 100 bog bridges, some quite slippery).  Two of the bridges cross streams - they are in bad shape and partially laying in the drink.

Nancy Pond came into view and we continued past it - it's small, not that remarkable.

All this time we met no one, a contrast from my last trip here - it was crowded then, particularly at the Cascades.  We arrived at Norcross Pond around noon and had lunch at the far end, the pond's outlet (where it eventually drains into the Pemigewasset River).  The view here is incredible. There we met Jeff, a lone hiker intent on camping in the area for the weekend (there are several nice tent spots around this pond).

My 2011 report describes a "No Camping" sign just before you get to the outlet - that's how you know where the herd path begins. That and other signs have been removed. But if you stand on the Nancy Pond trail facing the outlet (which is to the left of the trail), directly behind you is an opening to the herd path.  Go in that opening and take the trail to the left (there's a small cairn there this time).

The trail starts out quite pleasant then turns right and heads up adjacent to the slide.

The trail then turns right, heading away from the slide and for the most part is a steep "tree/root-grabbing" adventure (there are no scrambles on this hike).


We got to the Summit just as it started to drizzle. There is a sign on the summit now and we took a few photos and headed back before it really started to rain. 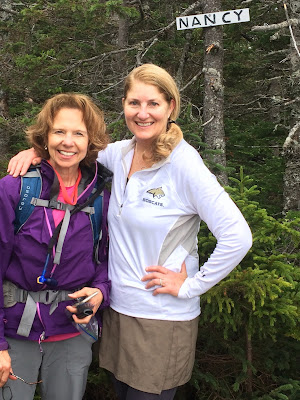 Heading down kept us on our toes as the path suffers from erosion and we were continually dodging small - now wet- bare roots just waiting to sweep us off our feet.  Wet slippery slabs got nuthin' compared to these slick devils!

We got down around 5 pm and went to get a growler.  Wet , muddy and beat we weren't up for having a beer inside the Moat.

Yep, still a tough hike no matter what the weather.

Posted by Peppersass at 4:27 PM No comments: