Trailhead: From the Adirondack Loj (1002 Adirondack Loj Rd, Lake Placid) head right on the Heart Lake trail  - toward Indian Pass trail. This will bring you to the Old Nye Ski trail.

Hiked with Jill and Ken.  Once again p.m. thunderstorms were predicted so we decided to stay away from open summits and ridges and instead bag two wooded peaks.

A sign by the entrance to the Adirondack Loj points right to get to Indian Pass - the Old Nye Ski Trail is on the way. 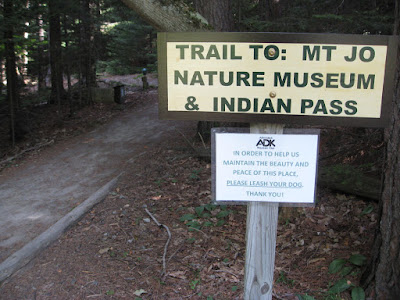 Just to the left of the junction is a sign indicating "Trail Not Maintained Beyond This Point." This is the trail you want, and it's in really good shape for an "unmaintained trail."  The trail is relatively flat until it drops down toward Indian Pass Brook.

You'll skirt the brook at times - wait for the trail to reach the cairns before you cross.


The water in Indian Pass brook was very low but we were warned that a flash flood (such as during a heavy thunderstorm) can quickly make it impassable.  We hoped we'd beat the predicted storms.

The path at the other end of the water crossing is narrow and rough, stay on it as it's just a cut-over to the main path.

Once on the main path it's pretty smooth sailing, though there are quite a few blowdowns in your way (with walk arounds). And these woods are gnarly - would hate to have to bushwhack here.

For a while the path follows a secondary brook. The trail steepens with offshoots of the main path going every which way.  For the most part, we chose the "left and up" options.  The good news is that most of these hateful little paths wind up back on the main path (we tested this by breaking up to go on different paths).  Still, it's good to pay attention to this.

Up it goes, a well-defined path in seriously messed-up woods.  There are old rotted trees, widow-makers, mossy creepy holes, stumps - you name it!

I would've gone right by the junction sign if not for two hikers - Ryan and Mary Beth - standing by it.  Note: it's not a sign per se but "NYE and ST." carved in a tree.


It's a mere .5 miles to the summit of Nye Mountain and that's where we headed.

We didn't spend much time on the summit of Nye (which was very "NYcE!")  We were hungry for that summit lunch so we headed back to the junction and up to the summit of Street Mountain, which is about .8 miles from the junction.

It was busy up there; we didn't think we would have company on our hike (it's a remote spot), but we enjoyed talking with the couples and families also bagging these peaks.  I never did see Mary Beth and Ryan again but managed to ask people I met if they'd seen them (which in turn, made the two pretty well known by the end of the day).

After lunch we poked around, enjoyed the view, and eventually headed back toward the Loj. About 1/2 mile before the Indian Brook water crossing we heard the rumble of thunder and as a result picked up our pace.  It started to rain as we crossed the brook and the storm danced around us for the rest of the hike before fading off (so we thought).

Just as we got to the Loj and opened a beer the weather came crashing down, with torrential rain and hail.  Better to watch it from the Loj than to be hunkered down in the woods!

Later that day one of the Loj staff asked me if I was the one looking for Mary Beth and Ryan on the mountain.  She'd been hiking Street and Nye also and heard about them from other hikers (wow, chatty group).