Trailhead:  The Van Hoevenberg trailhead (#61) is located at the ADK/HPIC parking lot (at the end of Adirondack Loj Rd, Lake Placid). There is a fee for parking.

Mt. Colden is best known for its Trap Dike, a large crevice in the side of the mountain - a challenging route to the top (not the route described in this report).  The peak was first summitted in 1850, via the Trap Dike.

Hiked with Jill, Ken and Ed.  The Van Hoevenberg trail is a "main artery" with many trails leaving from various points.

We planned do one of three peaks -  all with routes located off the Van Hoevenberg trail so we headed down that path, stopping at each trail junction til we decided which peak to do. Mt. Colden got the pick  -  a great choice.

We started out around 8:30 and made it to the dam in no time.


The Marcy Dam area is such a pretty place though the dam's destruction all but eliminated the pond, leaving a dryish crater-like dip.


The route described in this report reaches the Mt. Colden summit via Lake Arnold.  Mt. Colden can also be reached via Avalanche Lake.

The first part of the trail follows Marcy Brook, a very pleasant walk in the woods.


The path steepens a bit.  There is a short but rough area of haphazard rocks.

The trail is muddy with lots of bog bridges in varying states of newness and oldness. The old ones are simply partially hewn logs laid with the trail, fastened by spikes to shorter logs lying perpendular.  The really old bog bridges have worn down to splinters with hateful tree knots just waiting to catch your toes.


Lake Arnold is a small body of water - one of the highest elevation lakes in the Adirondacks. Very beautiful.


After the lake, the trail gets steeper and the serious ascent begins.
﻿

The trail doesn't have scrambles, just the odd chunk of rock here and there, and many slabs - all grippy even when wet. 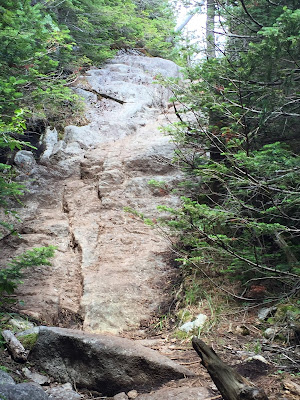 We hit a height of land and I figured we were close to the true summit. We weren't. Eventually we reached the false summit, a lovely baldy with mad views.


The trail skirts left of the false summit; blazes are on the rock slabs. If you look up and to your left you will see the summit cone of Mt. Colden. Look hard and you can see a ladder in the distance - stretching up the bump.

Ladders are fun if they're sturdy.  The series of ladders you encounter on the last push to the summit are new - sturdy, well made. 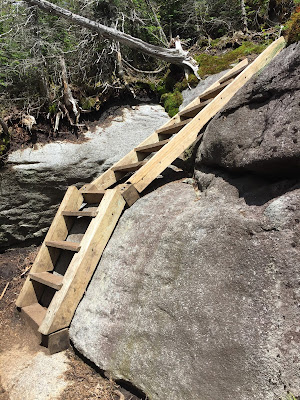 From here to the summit is quick and exciting.  Up the ladders we went and eventually onto a narrow path with views of the McIntyre Range (looks so close), and many other mountains in the distance.  Way down below we could see Avalanche Lake and the boardwalks.

The summit is off the trail, on the left.  There is a path to a big rock.  On that rock is a hole within a triangle (former home of a summit marker, I imagine).

We had lunch on the summit rock then headed back down stopping briefly at the false summit (can't beat the view).  We got back to the Loj in time for shower and dinner.

This hike is long by New England standards, but the mellow flats and varied terrain keep you interested and make for a great way to spend the day.

Posted by Peppersass at 5:13 PM No comments: