Trailhead: The trail starts at the River Junction parking lot and ends at the Hog Island Camping Area parking lot.  We spotted a car for this hike.

We left one car at Hog Island Campground, 9274 County road 635, Bushnell Florida. Head into the campground and hiker parking is on the left (signed, with a kiosk).

We left the other car at River Junction, which is just beyond Hog Island Recreation Area. Proceed out of Hog Island Campground and turn right onto SW 90th Ave, and then turn right onto SW 60th Street. Continue on the main roads bearing right as it intersects again with SW 90th Ave (past equestrian parking and the signs for the Iron Bridge and Hog Island Recreation Area) until you reach a campground on the left. The parking lot is further down on the right (on the river). There is a hiking kiosk located far right of the lot (in the woods).

Maintained by the Highlander Chapter of the Florida Trail Association, the Croom Linear trail, also referred to as the "Croom River Trail" is yellow blazed and not the Florida Trail. After the hike I found the following webpage: http://highlanders.floridatrail.org/croomrivertrail.htm which has a small photo of the route.

Hiked with Lindsey today. We both wanted to check out this trail so we met around 9:30 at Hog Island Campground to leave her car and drive mine to the start: River Junction.


It took about ten minutes of bumpy road to get to River Junction. We parked my car and found the kiosk that began the Linear Trail. 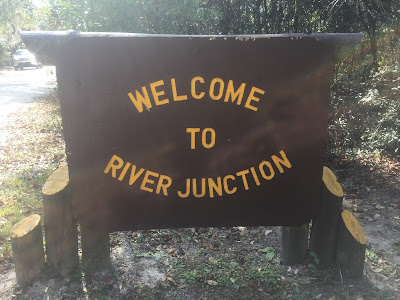 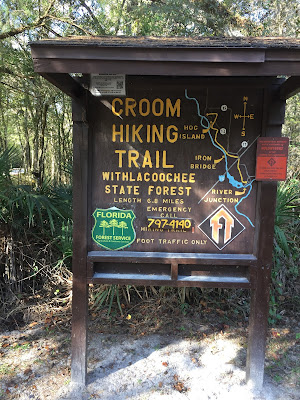 I had trouble researching this particular trail. I'd googled "Croom Linear Trail" and printed off a map from the Florida Trail website which included the Croom area but it wasn't until Lindsey and I were several miles into the trail that we noticed the map did not correspond with where we were! (Lesson learned; bring a GPS!) We continued on, hoping to wind up at the campground and Lindsey's car.

Throughout the hike we thought we were on the Florida Trail, though we were well aware we were east of the river, and the FT is shown on the map as west of the drink. There are many orange blazes interspersed with the yellow blazes. (We found out later that this trail isn't part of the FT, which was disappointing but reinforced my confidence in map reading - something wasn't adding up!).


It's easy to follow this trail. The path is maintained and yellow blazes frequent. There are dirt roads to cross, a recreation area and highway underpass to go around, and more than a few turns so it's important to pay attention especially to double blazes (turn or trail junction ahead).


We came across two blowdowns in the path. The first we walked around to get back on the path. The second we had to bushwhack further down and pick up the trail about 100 feet later.

When we got to the Iron Bridge Recreation Area we took a short break. It's a peaceful place, with just one car in the lot. The yellow blazes continue at the end of the parking lot.

Throughout this hike we had no doubt we were headed toward the campground. At about 6.5 miles I got concerned that the there may be a short spur trail to the parking area and didn't want to miss it by staying on the thru-trail (we still thought we were on the Florida Trail). Second-guessing set in and Lindsey checked her phone map, which showed we were clearly headed in the right direction.

Soon we crossed a dirt road and headed into open woods where we eventually saw campsites and shortly thereafter, the lot and Lindsey's car (right on the trail - no spur afterall).

Yes, we made some rookie mistakes but had a great time and although there is a definite wilderness feel, we were never far from civilization and well defined landmarks that would get us back to where we needed to be. Still, I cobbled a map of sorts (below - entire trail is east of the river). 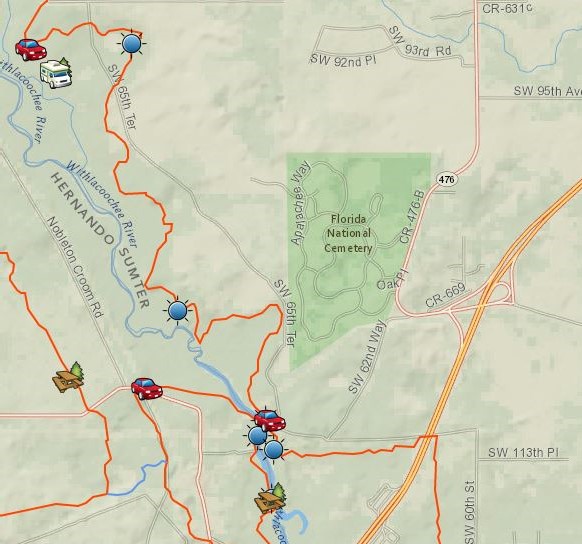 Posted by Peppersass at 12:48 PM No comments: