Trailhead: Trailhead is adjacent to the Pinecrest Little League fields, located at 9312 S. County Road 39, Plant City (there are bathrooms at the field).  We parked outside the fence - near the road. I've included a rough map (complete with corresponding numbers) at the end of this report.

Hiked with the Sun Coast Chapter of the Florida Trail Association.  The day started cloudy but by afternoon it was sunny and warm.  The Alafia River Corridor Nature Preserve consists of re-vegetated former phosphate mining acreage which offers some ups and downs, pits filled with water (bright green), and a two-headed palm tree! 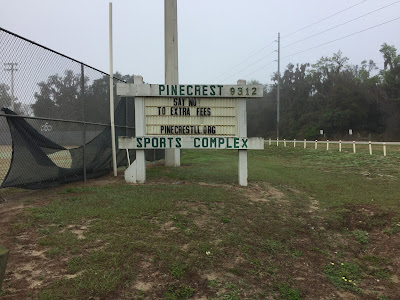 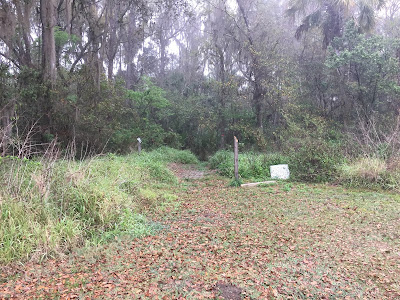 The first ten minutes of trail is the best part of this hike (IMO), with ferns and other lush vegetation, enveloped by moss covered trees.  There's the feeling of being hugged by the forest as you pass through. 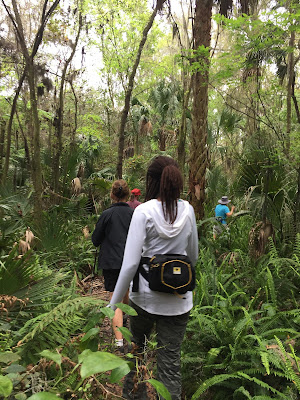 Soon we were on a wider path, heading for the river. 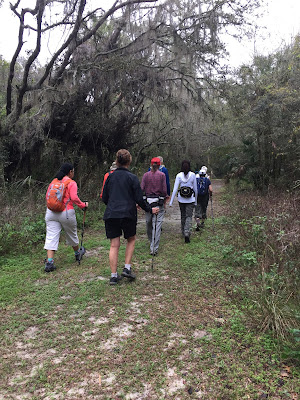 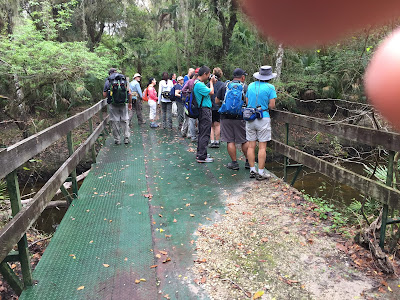 In the middle of nowhere there's a pile of concrete, and a junction - we took a hard right (toward  area #1 on the map). 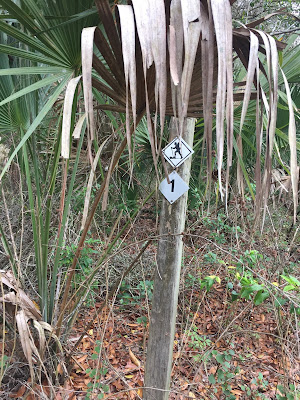 We took the path marked "1A" to the power lines and boundary where the neighbors treated us to a few fireworks.


We then backtracked and headed up a small hill, walking on a spine with the most beautiful canopy.


The mining of phosphate resulted in many pits and depressions in this area.  As we walked the spine we could see what was left of those pits - steep inclines and dropoffs, now filled with trees and ferns.

We turned left toward the lake and stopped there for lunch. 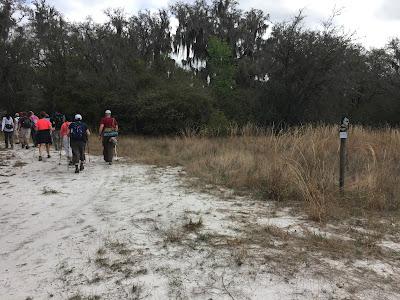 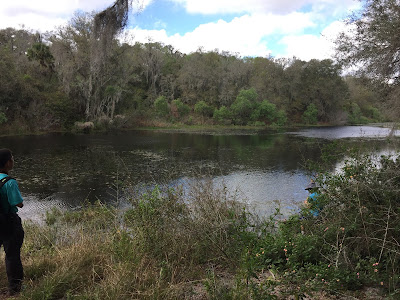 After lunch we backtracked toward area #2, crossed over the railroad tracks and walked down the road until we reached a large field. 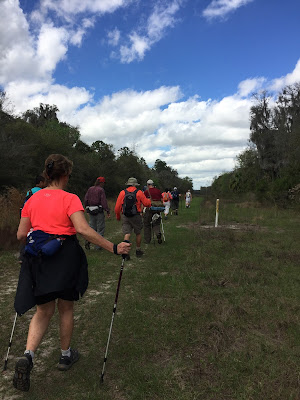 We skirted this field (see tower in the distance) dodging many large ant hills on the "path" (more like an old road). About halfway down on the far side of the field we found the two-headed palm tree. 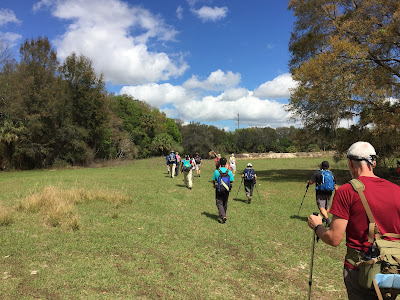 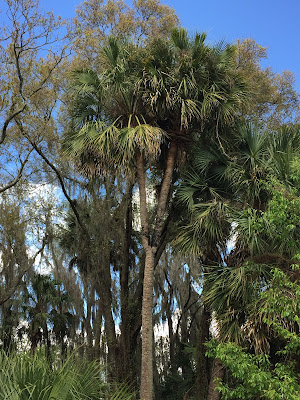 Apparently two headed palm trees are rare in the wild.  This one appears to have been struck by lightning, which caused the anomaly.

After many photos we ended our time in the clearing by turning right and heading toward the camping area. 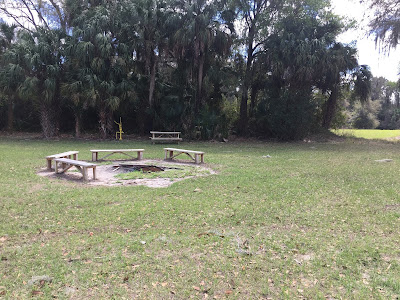 Back over the train tracks, we returned to trail #2, and back to our cars.

Trailhead: This hike requires a car spot. The hike begins at the intersection of Porter Gap and McKinney Sink Roads. These two roads meet several miles from the fire tower parking area. There is a "Little River" sign where the roads meet - park here.  (Don't confuse this location with the Little River parking area, that's further down the road).  The hike ends at the Richloam fire tower at 38294 Richloam Clay Sink Road.  (I've included a map at the end of this report).

Hiked with the Sun Coast Chapter of the Florida Trail Association today. We parked at the fire tower and were shuttled down Porter Gap Road to the start of the hike.


We began our hike in the Little River area. The trail is located on the right side of the road and is well marked.


We got on the trail and skirted a wetland for the first ten minutes or so, reaching the side trail to the primitive campground. 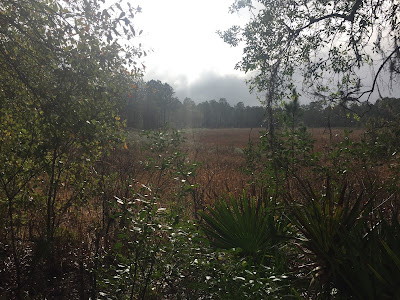 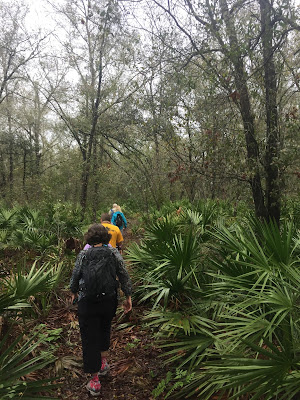 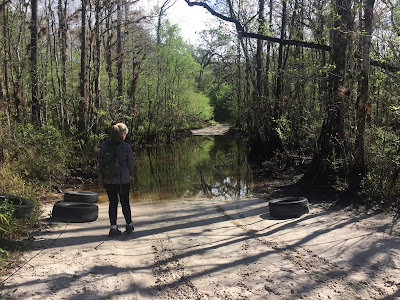 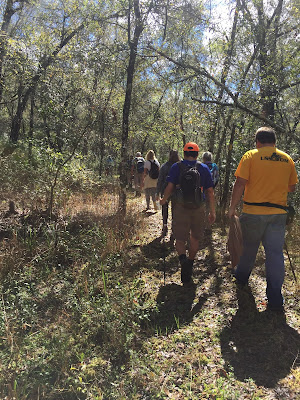 We crossed both the old and the new State Road 50. 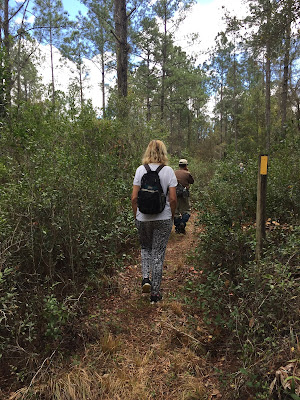 Soon after we crossed the roads we came to a trail junction where we went right, onto a blue connector trail, which we stayed on until back at the fire tower and cars. 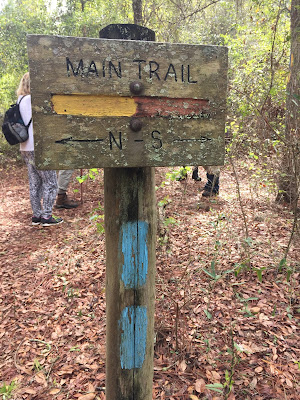 This is a very pleasant walk in the woods and represents a small piece of the awesome Richloam hiking area.

Hiked with Lindsey (and Daisy) today.  It had been a while since we hiked together and we just wanted to get out and enjoy the day. Lower Green Swamp Nature Preserve is a relatively new multi-use area for hikers, bird-watchers and equestrians.  I'd heard a lot about it and was curious to check it out.


A posting at the kiosk indicated the purple trail was closed as portions were undergoing prescribed burning. We looked on the map and didn't see a purple trail listed but figured we'd keep an eye out for it.

Much of the hike is on wide paths like the one below. We headed up the West Loop and then took a Connector trail. 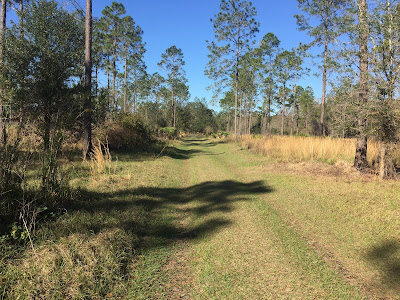 The trails pass through five gates to secure the areas being used as cow pasture. These gates are loosely chained, easily opened. About ten minutes into our hike we came upon a large clearing.


Here the Connector trail skirts the right side of the pasture, hugging the Itchepackesassa Creek.  Creekside provides a narrow variation to the flat and wide we'd been on.  We found a bunch of cow bones in this area. 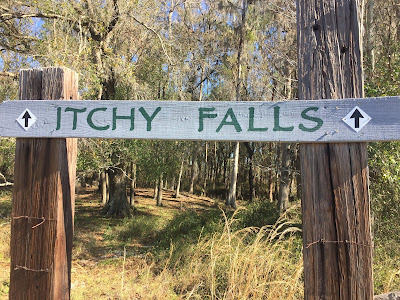 We crossed the bridge, headed right onto the West trail (the purple trail), and attempted to open the gate. This one was locked. 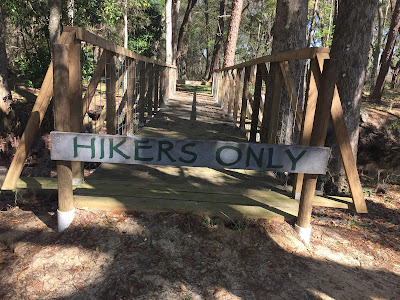 Just then a  hiker hopped over the gate and headed toward us.  We wondered if the gate was locked because of the burning.  He said he hadn't come across any smoke or fires and indicated things were quiet where we were headed. We climbed over the gate (Daisy snuck through the opening).

We reached a junction with a left turn at the area marked #7 but continued on the path straight ahead. 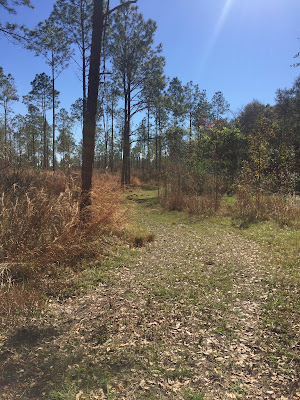 Perhaps we should have gone left at #7 as things were not quiet here; smoke was up ahead. As we got closer we saw an active burn, flames shooting 10-12 feet! It was awesome. After stern looks from the firefighters we moved past the flames (incredibly close to us) and headed toward another gate.


The rest of the hike went quickly as we headed down the Central and East Loops.

As we approached the parking lot a large group on horses headed toward us, much to Daisy's delight. 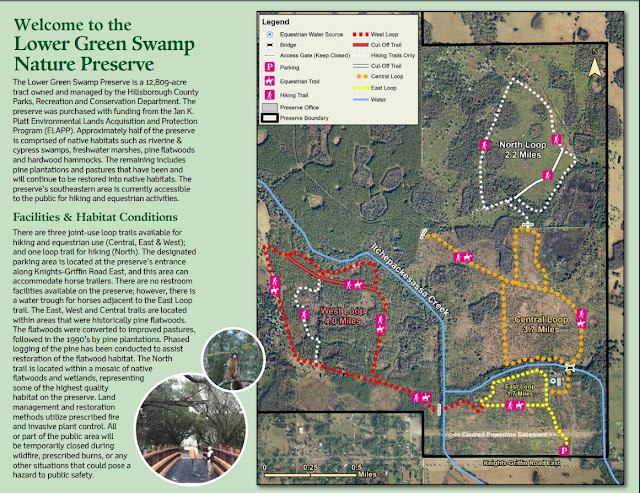 Posted by Peppersass at 10:16 AM No comments: