Trailhead: The trail begins at Guadalupe Mountains National Park's Pine Springs Campground off US Highway 62/180 in Pine Springs, Texas.  More information on the park's location can be found here. Park fee is $5 per person. Trailhead kiosk is located at the end of the RV parking area. There are a few unmarked spaces near the kiosk for hiker parking. These spaces fill up quickly. Overflow parking is at the Park's visitor center.

The Guadalupe Mountains are visible for hundreds of miles. Formed in the Permian period 250 million years ago, this range is actually part of a limestone reef during a time when ocean covered much of the area.  A large piece of the southern portion of this reef, named El Capitan, sits next to Guadalupe Peak.


Hiked with Sandy today.  We met in San Antonio, picked up Rhi along the way, and the three of us made the seven hour journey to the Park's visitor center.  My Garmin indicated the drive would take only six hours, or so it seemed by the GPS's "time of arrival."  Excited, we watched the arrival time get closer only to get launched back an hour when we traveled from Central to Mountain time (making the trip about seven hours).

(The time change plagued us for most of our stay as the airport we used to get home was still in Central time so while our phones indicated Mountain time, we continued to plan in Central time.)

It was a fairly enjoyable seven hours nonetheless.  We had breakfast tacos in Boerne, coffee in Comfort and tamales in Pecos.  We reached the visitor center before they closed (they close at 4:30), got weather information and a small map.  Then off to Carlsbad to stay at the Sleep Inn (40 minutes away). 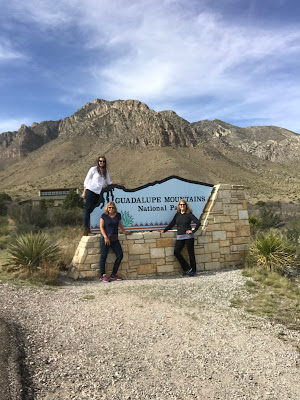 The next morning we arrived at the trailhead at 8:30 (Mountain time). The day started out in the high 50s; no jackets needed.  Rhi headed toward the Devil's Hall trail and we stepped onto the Guadalupe Peak trail.


Make no mistake, you are in the Chihuahuan desert and need at least a gallon of water for this hike - more than that if you are hiking late spring to early fall. Our Camelbaks held three liters (just under a gallon) and we ran out.


We broke the hike into four parts: the switchbacks (first 1.5 miles), the forest, the campsite/bridge area, and the final push. The steep switchbacks can be avoided by taking Devil's Hall and Stock trails, which is more gradual but adds a mile to the hike.

We took the switchbacks. Sure, it's steep but the footing is good and we immediately got views.


The trail is cut (notched) into the mountainside - and there's a lot of scree. With a few exceptions, you'll be hiking switchback after switchback. Enjoy the straight areas when you're on them.

The trail never gets narrower than three and a half feet across.  Most of the time the trail is four or five feet across.  To your left is steep mountainside (not so steep that you couldn't bushwhack up and there are shortcuts, though the park rangers request they not be used). To your right is the downward slope in varying degrees of downward. Only two short spots made me feel uneasy. There are two areas of craggy rock that need to be crossed - quite wide but still I crossed with care. 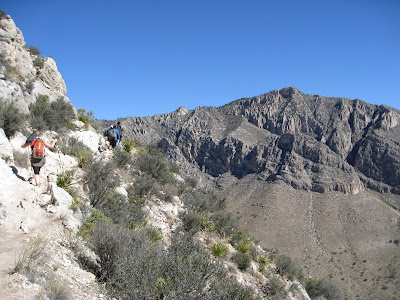 It was hot, the sun was bright. Even with sunscreen and hats our faces and arms got red (don't forget to protect your lips).  We reached what is called "around the bend," which led us through a high forest of pine and Douglas fir. This area has fewer switchbacks and is on the northern slope of Guadalupe Peak.


It was cooler here, with a little shade (about the only shade around). We took a short break on a rock and then headed toward the primitive campsite.


Edging along a cliff, we crossed a remarkable bridge, an unusual design.  Took some photos here.


After the bridge is the final push to the peak.

Know how it is when you see the top and work hard to get to the top only to realize it's not the top, the top's waaay over there?  This hike has a false summit which if you are having trouble with high altitude (8,000 feet above sea level) and unrelenting sun, can be discouraging.

But don't get discouraged!  It's a really moderate trail with good footing. There's nothing particularly hard about this hike.  A few places toward the top have a lot of scree and tired feet keep you alert -  and there are some edgy spots.  I missed one turn near the top (just above the hitching posts) and turned right instead, scrambling up a ledge that couldn't possibly be trail.

As I lost my footing I reached up for a branch or plant to keep me from slipping.  I grabbed a cactus!  After removing the spines from my hand I pulled myself up to a vantage point and saw where I'd made the wrong turn.  It's the last craggy spot before you reach the summit. I quickly got back on the trail.

The summit was crowded today.

Guadalupe Peak's summit has a reputation of being very windy but today there wasn't so much as a breeze and it was clear as a bell.  The views are amazing.

In 1958, American Airlines installed a monument on the summit. It's in honor of the Butterfield Overland Mail and the pilots who flew over the area delivering the mail.   The register is in the green box at our feet (we signed on one of the full pages).

After a few summit photos, we had lunch and headed back down. The scree slowed our descent in a few spots and we saw a lot of latecomers struggling up, but otherwise the trip down was uneventful.  It was good to get back to the car, where Rhi was waiting for us.

We headed to Carlsbad to have a celebratory margarita and found that only a few establishments there have full liquor licenses.  We finally found one of them and got a very strong, very delicious drink...... along with tall glasses of water.

Posted by Peppersass at 8:43 AM No comments: