Trailhead: The Van Hoevenberg trailhead is located at the ADK/HPIC parking lot (at the end of Adirondack Loj Rd, Lake Placid). There is a fee for parking.

Hiked with Lindsley today. The last time we hiked together was to bag North Brother, the mountain in Maine that was my finish of the New England 67 4k peaks (see previous report). I was excited to be hiking with her again and since Lindsley had never hiked in the Adirondacks, I chose Wright Peak for its easy access and spectacular views.

We got to the High Peaks Information Center/ADK parking lot at about 8:30 and the lot was filling up fast.  The Information Center is under construction and there are port-a-potties outside. I would recommend that you NOT use these and go inside where there's a rest room. (I am all for accommodating the crowds with port-a-potties but these are the worst I've seen.)

We signed the trailhead register and headed up the Van Hoevenberg trail for just a mile. It's wide, like a well maintained dirt road. 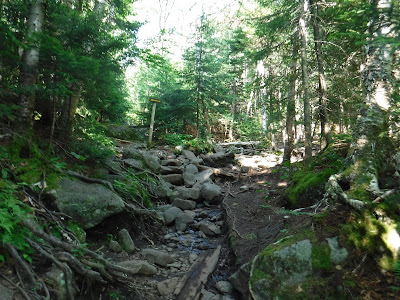 The trail steepens and there are a few tricky turns; look for obvious signs - erosion, footprints or evidence of wear on ground or roots. 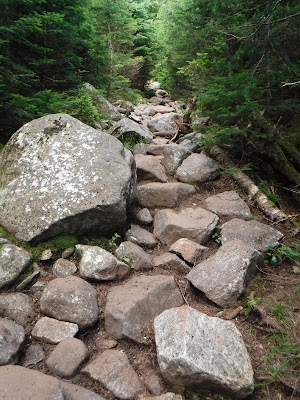 Like many trails in this area, parts of it run up a brook but it's well marked with the DEC disks and easy to follow.

The higher you get the steeper the slabs, but when dry the rocks are sticky, easy to get up and over. 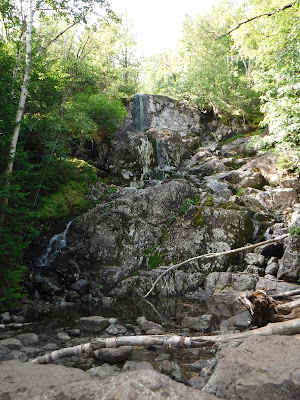 We went left when we reached the second trail junction (straight would take you to Algonquin Peak) and immediately negotiated a wet, steep slab.  This portion of the trail is pretty much steep slab and rock, you'll work for that summit view! 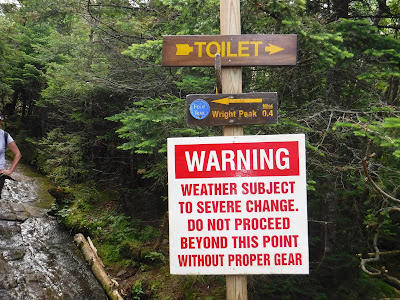 The jumble of rocks and treeline disappear once you conquer this one grand rock formation (shown below). We noticed yellow blazes on the left, suggesting we go that way but instead went up on the right side, shown here, followed a horizontal crack and then up. 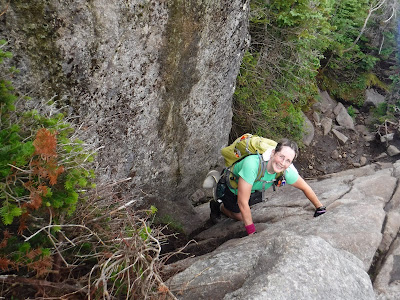 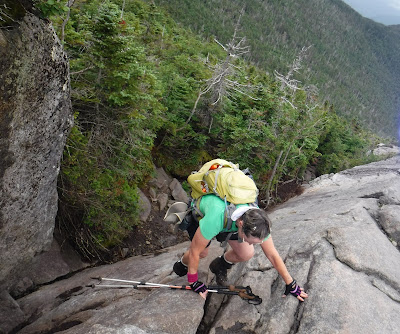 After that it's all slabwalking, baby!  It's fun. And of course the views wowed us. 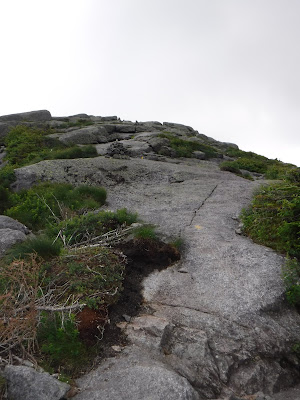 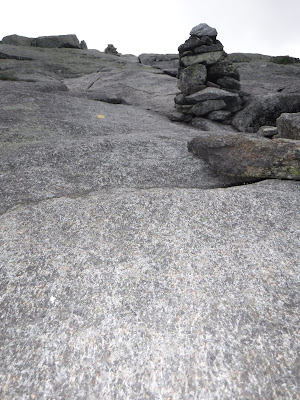 The wind whined as we approached the summit. Wright Peak is famous for it's tough summit winds, sometimes requiring the determined peak bagger to crawl to the top!

But not today. It was loud in our ears but perfectly walkable.

The 360° summit views are spectacular.  On top we talked with the summit steward a bit, had lunch and then poked around trying to see the wreckage of a B-47 bomber that crashed in 1962. 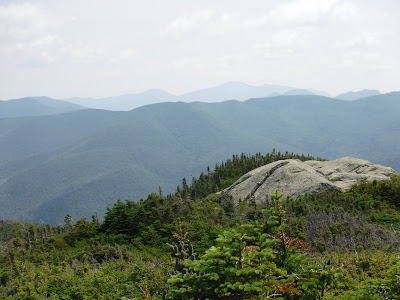 We headed toward the site of the plane wreckage but weren't motivated to hike down to it or the memorial plaque. I spotted a few pieces of wreckage, took photos and headed back to the summit.


Getting down was quick and easy; we signed out and drove back to Keene Valley, where we were staying.


Hiking the McIntyre Range from Avalanche Lake is planned for next month but all in all I am glad to have Wright Peak done now. The spur trail puts you to work; the .4 miles is steep and rocky; I doubt my legs will want to "run" up there after Iroquois and Algonquin.

And, Wright Peak is one of the few Adirondack peaks that offer mad summit views in under four miles.

Posted by Peppersass at 6:55 AM No comments: