Trailhead: The Van Hoevenberg trailhead is located at the ADK/HPIC parking lot (at the end of Adirondack Loj Rd, Lake Placid). There is a fee for parking.

Hiked with Jill, Ken and Ed today.  We rented a house in Keene for the week and wanted to bag as many high peaks as our legs would allow.

Our primary goal however, was to get Iroquois and Algonquin.

Originally we considered the loop up from Avalanche lake but abandoned that plan for the more traditional Algonquin trail route - out and back (no regrets).

Both peaks had to be done together.  Iroquois is a peak I would not wish to try to bag by itself (via the Avalanche Lake route). It's a steep trail, and most likely we'd end up going back over Algonquin anyway to avoid backtracking to a steep descent.  So, in my mind they would need to be done together the first time.

We got to the near-full parking area at 7:30 a.m., signed the register and headed up the trail. We knew we had some miles ahead of us so we almost sprinted that first mile - made it in 20 minutes. 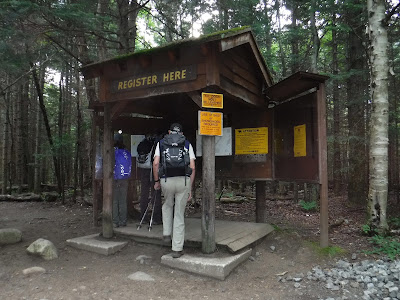 We got to the junction and headed up the Algonquin trail which was all too familiar to me (see Wright Peak trip report last month).

Still "sprinting," we finished mile 2 in about 26 minutes!  Of course our quick times didn't last but it's like banking time for the steeps, a way of improving our overall hike time (not that it matters but it's fun to play with the numbers).  We started up the steep rocky trail toward Algonquin Peak, trying to keep up the brisk pace. With the cool of the morning and my wet shirt I was feeling the chill. 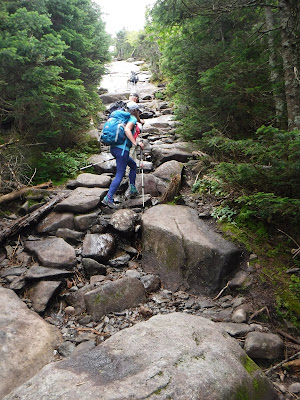 It was tough getting into ascending mode. The trail is a jumble of rocks - steep going with just a few areas of "less steep." But once I reach the summit of Algonquin I'll have done the majority of the elevation gain. Then its just a matter of the ups and downs of the ridge (and of course I'll have to go up Algonquin again from the col - on the return).

After hiking to Wright Peak last month I knew this stretch of trail but it's funny how you notice new things the second time around. Among the rocks there are series of steps. And I got a good look at McIntyre Falls.

At the junction of Algonquin and the Wright Spur trails the wind picked up and I changed into a long sleeved tighter knit shirt, which kept me comfortable for the rest of the trip.   (Note: if filtering your water, the last water availability is before this junction).

The trail up to the summit of Algonquin is beyond the sign. The first ten minutes or so are fairly moderate but the steeps are coming!

There are several huge never-ending slabs ahead, very steep, with water running down them.  We tackled them by hugging and tugging the side vegetation, and walking on cracks.


Higher and higher we went - quickly, those steeps brought us up fast!  We rose above treeline where we negotiated more scrambles. There are a few interesting scrambles on stacked rock - takes a few minutes to get up them! 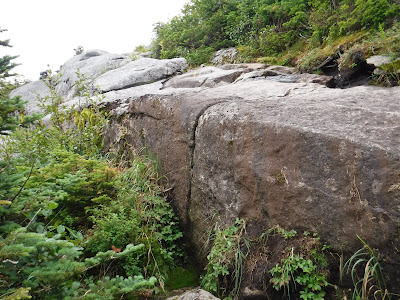 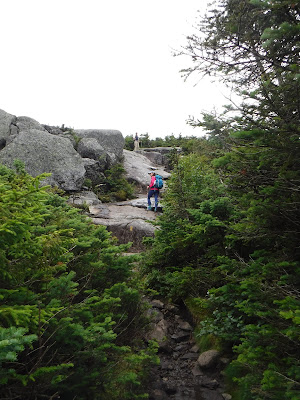 Above them we slabwalked to the top. The summit was in the clouds, we saw next to nothing. It was chilly, the wind was whipping. 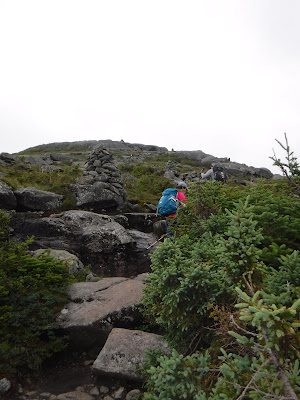 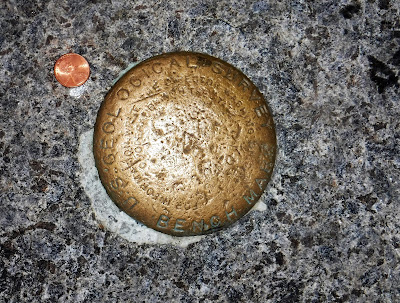 I took a photo of the summit marker and off we went to bag Iroquois.  As we left we could see some views of Mt. Colden to our left.

We started a fairly easy descent down the back side of Algonquin as the skies started to clear.

It seemed like just a few minutes and we were at the arrow pointing left to the continuation of the trail down to Avalanche lake. Here we went right, onto the unmaintained path to Iroquois (surprisingly, this path is numbered - 66 - on National Geographic's trail map) .

The unmaintained path is narrow with many bog bridges, and no discs or trail signs. It's easy to follow.  Ken remarked that trail conditions here are better than some of the maintained paths we'd been on and he's right!


Before you reach Iroquois' summit you first have to go over Boundary Peak - another mountain. A scramble or two later and we were on top of Boundary - very quick - another bald peak with far reaching views. 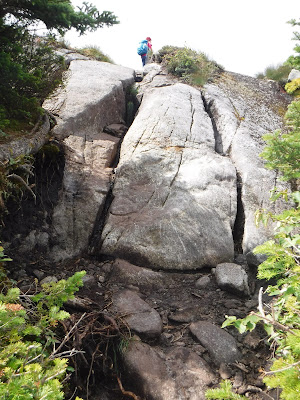 We didn't linger though, kept on going down the other side where more bridges skirted an alpine bog.  We walked through the bog area, then up some steep rock to the summit of Iroquois. Several scrambles were tough but there are walkarounds.

A word about walkarounds, those extra unofficial paths that go up through the woods or by the side of a rock face - most of the time providing a much easier option to finding hand and foot holds on a hard steep surface.  Walkarounds are ugly and contribute to erosion - generally bad for the mountain..... BUT if your legs are short, you're tired, or unsure of your boot grip or abilities they are an option - better than slipping, falling, injuring yourself and trying to walk out 4 miles when you can't put weight on your foot - or worse.  So yes, we did a few walkarounds on this unmaintained trail, particularly on the approach to Iroquois. 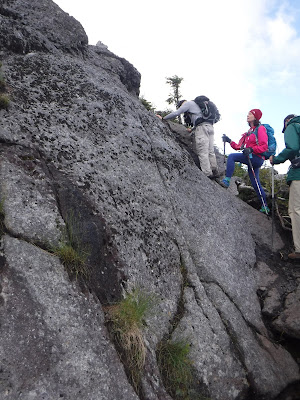 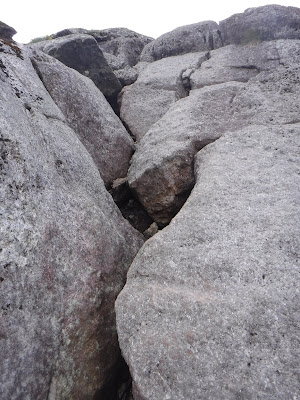 The Iroquois summit was quiet; just a large flatish oblong area and a few cairns - no sign or summit marker.  The view was clear and 360°, with fair winds. We could see the Santanoni Range and MacNaughton in the distance, the lake below, all the peaks it seemed.

The ridge hike energized us and after lunch we headed back down, and up and down. In no time we were back at the arrow. Still had the hike back up Algonquin ahead of us.

But, the day had blossomed into that day, you know, the one you wish for when hiking a ridge. Smiles all around we slowly chugged back up Algonquin where the views are breathtaking. 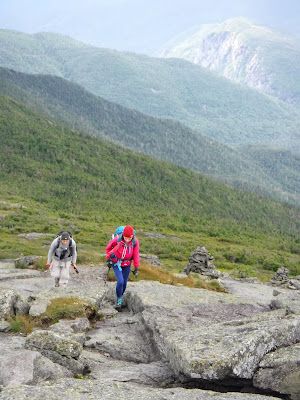 After taking photos and chatting with Algonquin's summit steward, Jill noticed the skies darkening in the distance.  That was our cue to head down. 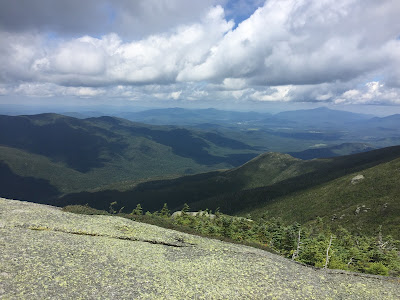 As we left the summit and hurriedly maneuvered down the slabs we kept glancing back at the dark clouds and the sheets of rain headed our way. Thankfully we arrived at treeline quickly.

When we reached the never-ending slabs, the roots and vegetation we clung to on the way up virtually disappeared (they're downward sloping and no help to us now!). Even butt sliding was a bit harrowing.  Fortunately, this part of the descent was almost over when it started to rain. Things got slippery, especially for tired legs and mud-filled boot tread.  We dodged raindrops for a bit, then put our pack covers and rain jackets on.

That stopped the rain.  We continued to descend for what seemed like a long time (isn't that always the way!) before we reached the VanHoevenberg trail. As the rain returned, we took advantage of the wide flat trail and made tracks for the car.

Looking back, what amazed us is how easy and fun the ridge is once we got there. The ups and downs never taxed us; it wasn't very crowded and we just loved the terrain. Highly recommended trip!
Posted by Peppersass at 11:30 AM No comments: