Hiked with Sandy today.  We met in Phoenix and poked around Flagstaff (elevation 6,900') the days before our hike.  Because of the altitude I fully expected to be gasping my way up to the summit (we did visit the Snowbowl the day before and walked the nature trail @ 9,200' - a halfhearted attempt to adjust to the thinner air).

On summit day we got on the trail late, around 8:28, mostly because I was fiddling with my GPS in the parking lot (I'd loaded a track from wikiloc.com). The GPS gave an elevation reading of 9200' at the car.


The path starts out flat as we walked along the base of Snowbowl's slopes. When we entered the forest we were shocked at the blowdowns on both sides of the trail -  rotting trees and a general mess for the first quarter mile or so. 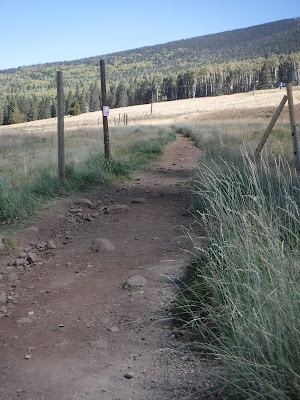 The route is comprised of long, lazy switchbacks followed by a straight flat section and then short, steep switchbacks, the saddle and the one mile "rock walk" to the summit.


Nine-tenths of a mile in we reached the trail register and signed in. The path up to the saddle is unmarked but obvious.


The day started chilly and the peaks were hidden behind dark clouds, a disappointing sight - no views from the peak!  We put on gloves and chugged up the path, counting the turns of the switchbacks and wishing those clouds to leave.


At the third switchback we reached a huge slide.   Boulders stretched the length of the mountain, as far up (and down) as we could see. After a few photos we hopped back on the trail.  I was winded, so was Sandy, but it wasn't too bad. We were a bit apprehensive though as to how well we'd be breathing at 12,000'! 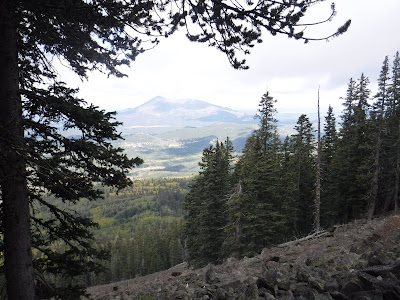 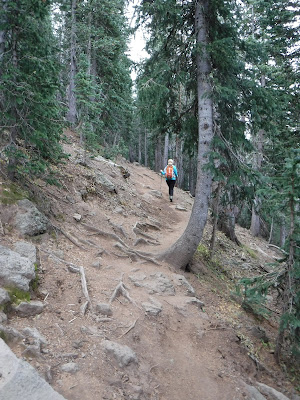 Those considerate gray clouds were dissipating as we ascended and we could see ski slopes tucked between the trees, deep browns and greens.

We rose above the long switchbacks, reaching the flat stretch. The path led us through another slide (this one resembling Tripyramids' north slide). 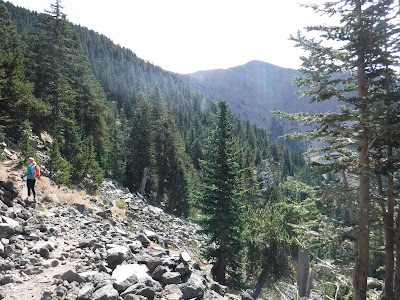 As we walked up the short, steeper switchbacks we saw several hikers returning.  One couple had reached the saddle but turned back - too cold and windy up there.  Another hiker informed us that the "real work" was ahead of us.


We negotiated the remaining 2.5 short-but-steeper switchbacks in no time, reaching the saddle (3.8 miles from our car).


Two hikers (locals) were resting at the saddle junction.  We chatted for a bit, asked them why the forest had so many blowdowns at the bottom (they didn't know). One of them warned us that from here on in things get "scrambly." (Scrambly?  When I researched this hike scrambles weren't mentioned.) She added that people who don't like heights might have a problem too.

I can assure you there are no scrambles or scary dropoffs.

The saddle is at about 11,700', just 900' below the summit but from here the trail significantly changes in character, with a path way more rocky and less defined.  At times it took some thought to find the trail; there are trail sticks showing the way, which helped. Several times we used our hands to hoist up and hop over rocks which slowed our pace,  - and kept our breathing in check.  Yes, we were sucking wind but stopping briefly (just few seconds) completely resolved any shortness of breath. And so we negotiated the last mile by alternating climbing and stopping for just a second or two to recover. 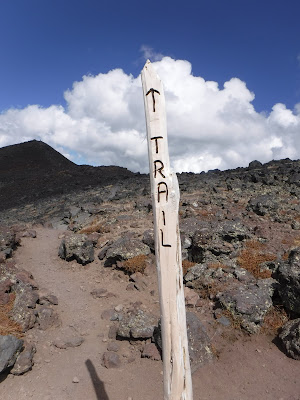 Two words about false summits. They suck.  We could see the approximate length of the ridge from the saddle - sure looked like a mile.  But in the throws of hiking it, as our eyes hopefully looked toward the top of each rise we were disappointed to find another "peak" in the distance (there are three false summits).  There's no doubt which of these is the summit, however, that famous Humphreys Peak sign is visible from the third bump.

The summit is riddled with volcanic rock boulders - reminded me of talus in how it shifts your feet when you try to walk. And these jagged sharp things are more round than flat.  We spent the majority of our summit time sitting against one of the two rock walls, out of the wind.

It was beautiful! The clouds were gone and the view crystal clear.  Temps on the summit were cold but we got 360° views.  We had lunch there, chatting with a handful of people. 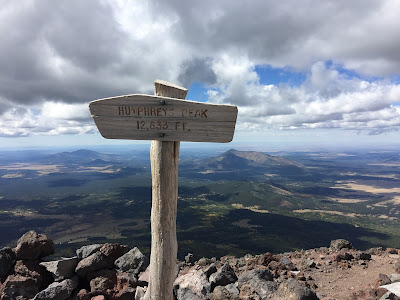 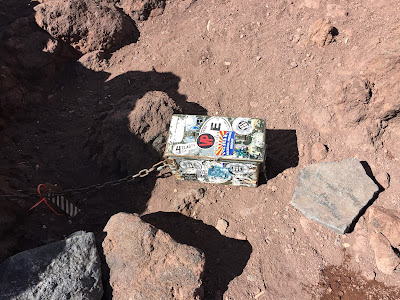 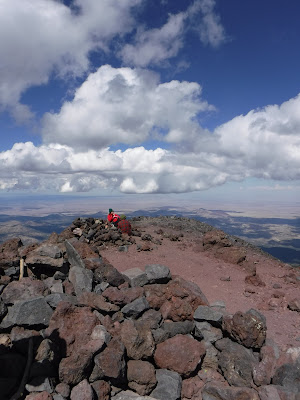 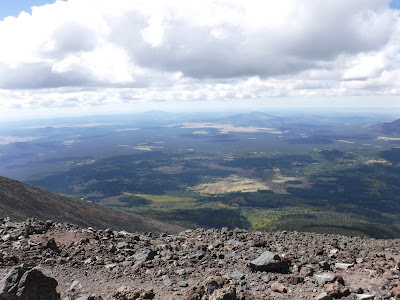 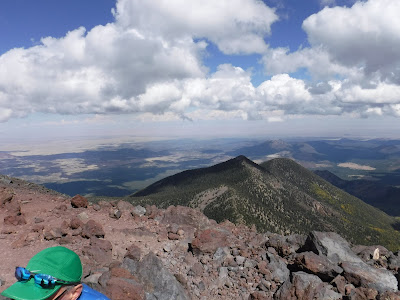 Before our hike we decided on a "turn around" time (AZ does not recognize daylight savings - gets dark really early) and the climb had taken longer than planned so we cut short our visit, packed up and headed down.

In so many ways the trip down is more beautiful than the trip up.  The entire ridge is visible as you descend the summit cone, breathing is much easier and post-summit euphoria sets in.

We took our time getting to the saddle, taking lots of photos and....just lingering.  Below the saddle we caught up with our new friends we'd met at the summit - two NAU students - and we all moseyed down the trail back to the car, getting down by 4 pm.  The four of us wound up at Mother Road for pizza and beer.

Posted by Peppersass at 10:33 AM No comments: