Citrus Tract is one of three areas in the Withlacoochee State Forest. The tract has four hiking loops (A, B, C and D) and connector trails. A portion of the Florida National Scenic Trail (referred to here as the Florida Trail), orange blazed, runs within the Citrus tract. Today's hike is on D loop, counter-clockwise (see map below).

Hiked with the Sun Coast Chapter of the Florida Trail Association.

To hike mid-May in Florida is a gift.  Hiking season typically runs October through April, and as summer approaches hikers held hostage by the heat opt for shorter, earlier treks or simply wait until fall to venture back into the woods and onto prairies.

But we were in the middle of a moderate albeit rainy week with temps in the mid eighties, so we went for it.

Our plan was to start early and hike at a good pace so as to avoid the thunderstorms.  (Just one rumble of thunder was heard on this trip. The rain came early though, around 12:30, making the final two hours of the hike wet...and then not....then wet again, as the storm system worked its way through the region.)

Just before 8:30 we started down Forest Road 11B (dirt road to the left of the cemetery) and followed it until it intersected with the D Loop trail. We went right, onto the trail.


Stage Pond's nothing special - hard to see, overwhelmed with grass and other vegetation. I missed it at first.


All loop trails are marked with yellow blazes, connector trails with blue.  We'll stay on the yellow trail, then take the connector trail.  The connector trail ends at the Florida Trail - blazed with orange - which will bring us back to Route 480, just east of our parked cars. 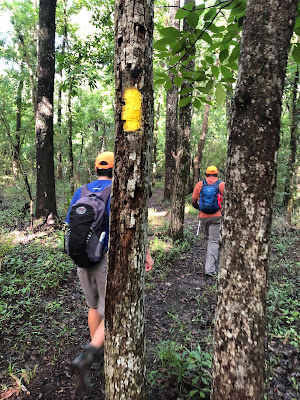 A few minutes on the trail brought us to Taylor Campsite, now officially "PCZ-D," or Primitive Campsite Zone-D, renamed by the Florida Forest Service.


Brittle Road was our first intersection; we'll cross about a dozen roads on this loop. 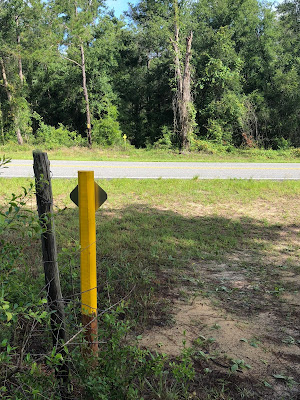 Our surroundings changed. No longer dominated by pine flatwoods, there's a velvety greenness all about. After months of very little rain and hiking dry dusty scrub, it was a treat to get out into the lush. Raindrops sparkled on leaves and branches.  We saw butterflies, heard crows and cicadas. 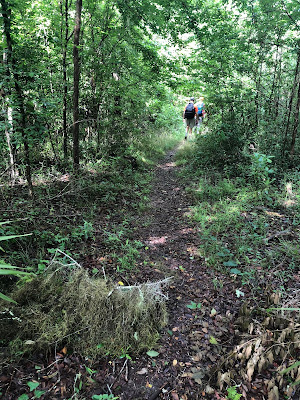 Sinkholes can be any size and often the sink is nothing but a small "meh" depression.  Not Lizzie Hart.  Part of the Brooksville Ridge, an area higher in elevation, the drop is significant.  It's deep.

Next up: the caves. Not long after we left the sink we reached a cave and a peace sign painted on a tree.  This isn't the only cave in the area. The spot's popular with locals, easily reached by one of the forest roads.

From here we traveled several more miles of trail, crossing roads and horse trails.  Clouds came in, temps were rising and it was warm and humid. The majority of this hike is under cover of woods. Still, we enjoyed the cloud cover and the occasional breeze. 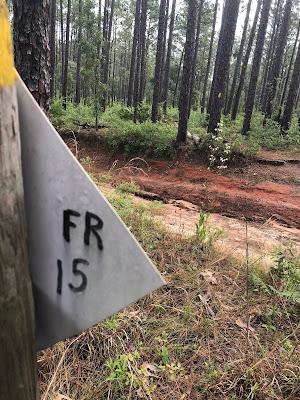 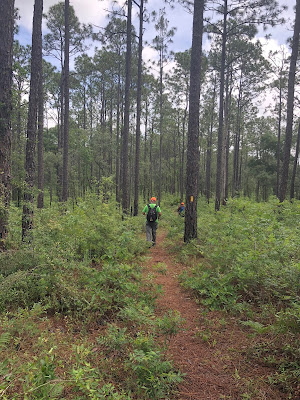 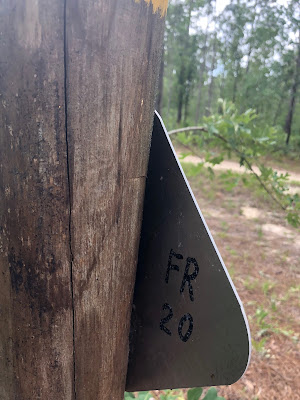 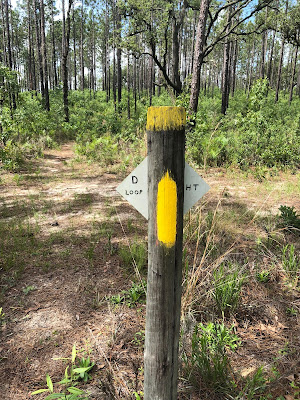 The junction of the connector trail was a good place for us to stop for a quick lunch.  The bugs were out and we were watching the clock and the skies.

If we continued on the yellow blazes here, we'd be beginning the west side of "C Loop" (we'll save that for another day).  Instead we turned right on the blue blazed trail (for 1.8 miles in length), headed for the Florida Trail intersection. 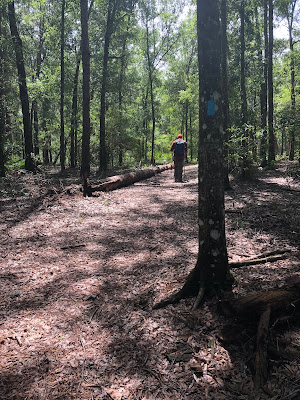 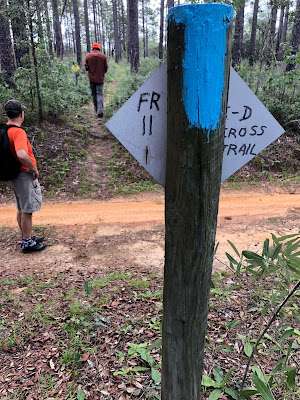 A wooden bench marks the end of the connector trail. We turned right onto the Florida trail and followed the orange blazes back to Route 480.


The wind picked up and big drops of rain fell -  intermittently at first.  Within five minutes a heavy shower doused us, then tapered off to a sprinkle.  It wasn't the last of the rain, though.


Its peaceful in the woods during a rain; the group walked quietly toward the end. The roar of wind (and oncoming rain) got the ponchos and umbrellas out.

Eventually we heard vehicles on the highway and found ourselves back on Route 480. We could see our parked cars off to the right but continued across the street and back into the woods on the yellow trail until we reached the pond. 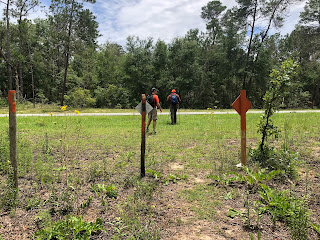 Rather than go around the pond (we were tired and wet) we went right, onto Forest Road 11B and back to the cemetery and our cars. 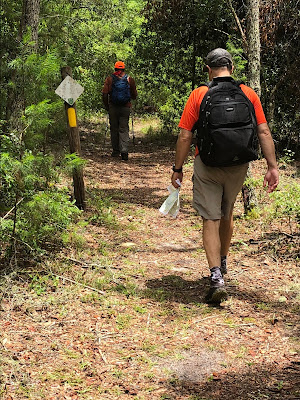 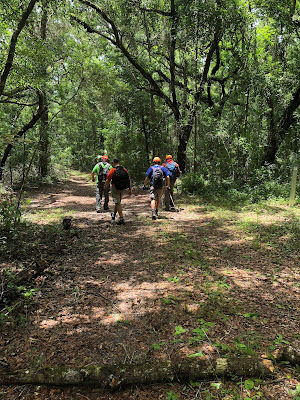 Aware of the forecast we'd hoped to avoid rain but the showers cooled us down and we were able to enjoy hiking this beautiful part of the Citrus Tract.

Posted by Peppersass at 12:06 PM No comments:

Part of the New England National Scenic Trail system, the Metacomet-Monadnock Trail begins at the Connecticut/Massachusetts state line and ends at the summit of Mt. Monadnock in southern New Hampshire, a total of 114 miles. The hike described below is along Section 6.

Hiked with Lindsley on this rainy day.  We parked at the cutout just outside the Reservation gate and carefully walked south along busy Route 141, hopping onto the path at the end of the guardrail.

There's a labyrinth of unmarked paths here. They go every which way but eventually intersect the Metacomet-Monadnock Trail (M-M) as it heads up the mountain.  It gets confusing as to which path to take but Mt. Tom's antennas are in clear view and we walked up the slope toward them, quickly finding the white blazed M-M trail.

This part of the M-M trail is short but steep; a mixture of slab and gravel.  Within minutes we were high enough to get glimpses of view through the trees.  It continued to rain; luckily, there were breaks in the clouds and we could see parts of Easthampton below.


The top of Mt. Tom (1,201') was ahead of us on a craggy outcrop.  Years of graffiti littered the rocks.  There's a sidewalk (parts broken) and railing facing the valley. We stopped for a minute to put on our rain jackets. 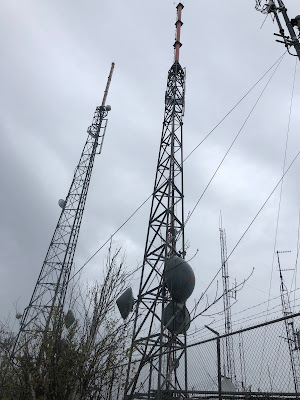 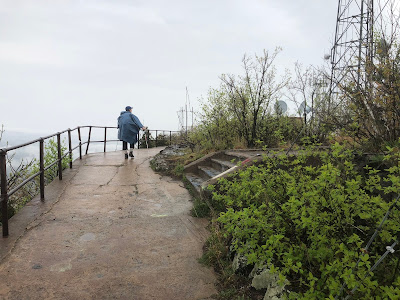 For the next few miles we were treated to a ridge walk complete with scrambles and narrow aisles skirting steep drop offs. There's more rocky cliff than woods on this hike - the terrain reminds me of the Blue Hills near Boston.  Rocks are pretty sticky though even wet but there were a few areas we chose not to scramble down, opting instead for the walk-around (most of the steep areas have less steep side paths). 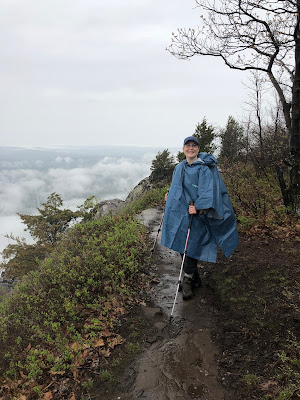 No one was out hiking today and we wouldn't have been either except this was our only free day. It wasn't cold and the trail is very interesting so we kept on.

The ridge has all sorts of interesting waypoints.  We passed another antenna and a horizontal windmill but never did see the abandoned ski slopes.


We reached Deadtop Mountain (1,093'). The rain was really coming down. Discouraged, we talked of turning back.  But we had rain jackets and ponchos, leaving no excuse for wimping out so we continued on.


The trail is well marked and footing is good for the most part, though there's a place or two that we took extra care.  In several areas you can see 50-100' down the side, wouldn't want to slip!


We topped out again  - at Whiting Peak (1,003'), headed down and were back in the woods.  When the junction to Quarry trail (right) came up, we went straight. 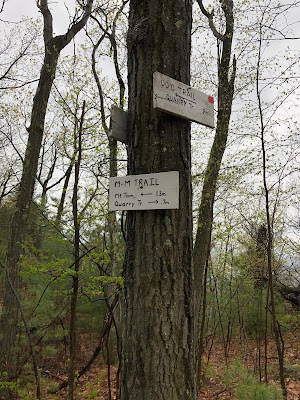 A Baltimore Oriole was chirping/hopping around the ground on the trail.  His wing looked broken, feathers facing the wrong way.  He was quite chatty and seemed interested in us. 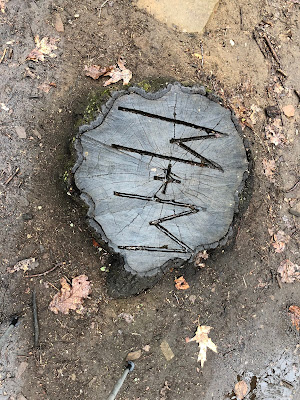 The trail continues to descend and there's even a switchback.  We were heading toward Reservation Road, in the middle of the park.

There's an area of broken concrete and old picnic tables, the park dump perhaps.  A few minutes later we were on Reservation Road.  The rain had let up and a group of kids were at the pavilion a few yards down the road (glad the weather had improved for them). 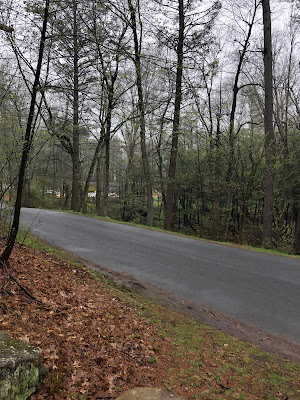 Here, 3.1 miles in, we turned around. The other option would be to continue to the lookout tower on Goat Peak but we were pretty sure it would be closed (still early in the year). 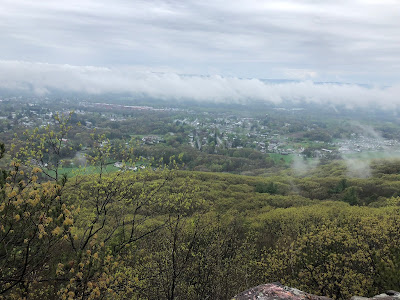 The hike back was pleasant; the weather had improved and people were on the trail.  The areas that were hard to descend in the wet were much easier to manage on the ascent. 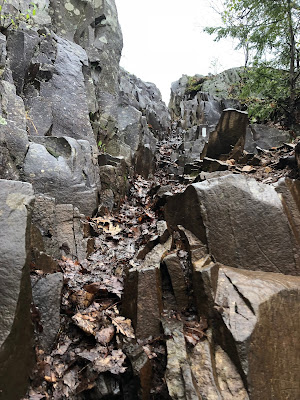 At that same spot in the woods we found the Oriole chirping and hopping.  I threw a little of my granola bar to see if he was hungry.  He wasn't interested but stayed with us for a minute or two. 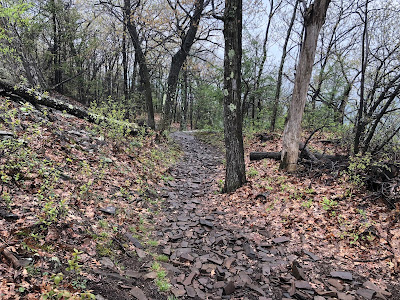 Past the summit of Mt. Tom and heading back to our car that maze of trails stumped us again.  We kept going south and then headed right where we thought we came in. We got it right  (even if you wind up on another trail you can see the highway and make your way back to the car).

We enjoyed this hike and want to come back in better weather. Between five and six miles of the M-M trail runs through this reservation so if you want to hike the entire park, plan to be on it a good part of the day. 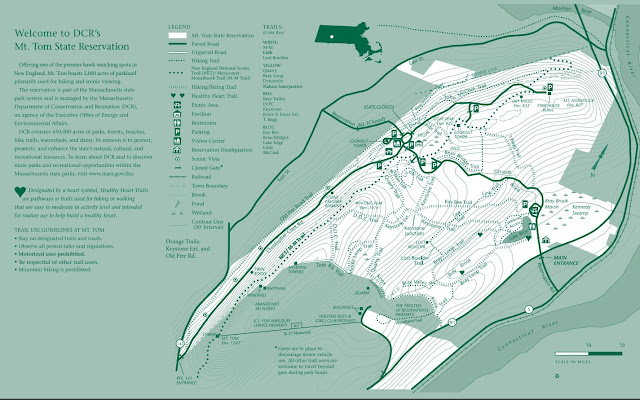