Use either the north or west park entrance (during busy times the west entrance can get backed up). $25 entrance fee gives you a seven day pass into the park.

Note: There's very little shade on these trails. You'll be hiking in the sun.  Sunscreen, sunglasses, and hats should be worn.

Hiked with Sandy today.  After renting a car in Phoenix, we drove the 3+ hours to Twentynine Palms, California with plans to spend two nights backpacking in Joshua Tree National Park. We're new to backpacking and it was critical that we check out our gear prior to a five day trip with our more experienced friends.

I did the research. Some of JT Park's backpacking rules include registering at one of thirteen staging areas (permits are necessary but free), no fires, and camping at least one mile from a trailhead and at least 500' from a trail. We brought all the stuff we felt we needed, including a very heavy seven liters of water (no water is available in the park). One of the rangers recommended we start from Juniper Flats because the area is filled with Joshua Trees and cactus.  I liked it because it was close to Keys View and Ryan Mountain (which we never did visit).

The plan was to spend one night in the Juniper Flats area, hike back to the car the next day to get more water and supplies, and then drive to the northwestern side of the park, hiking in and spending our second night there.

What we didn't count on was an approaching cold front and its fierce wind.  A high winds warning had been issued by the weather service, expecting gusts of 50-70 mph.

Foolishly we figured we'd deal with the wind later. It has to calm down at some point right?  It could be worse, we could be dealing with torrential rain.

So instead of scouting out a suitable overnight spot early in the day, we went sightseeing - the Cholla Cactus Garden, Skull Rock, Arch Rock and Keys View, and didn't get to the Juniper Flats parking lot until 4:00. We filled out the permit and made sure we had everything (we forgot to pack our wine, very sad). 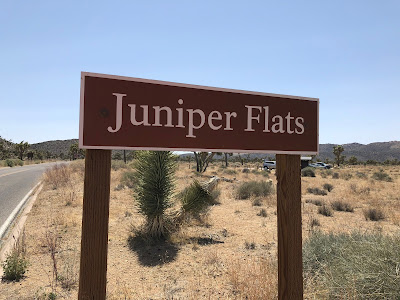 With our gear on our backs, we crossed the road and turned left, walking the few hundred feet to where the California Riding and Hiking trail crosses. We headed east on the trail, toward the intersection of Lost Horse Mine Loop trail.  The path is unmarked but wide and sandy, with Joshua trees standing by. 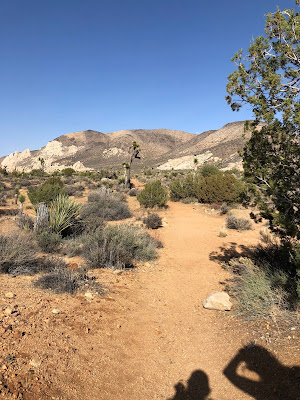 Signs mark the trail junctions and we were baffled when we reached the junction of Big Trees trail.  Big Trees trail isn't on the National Geographic map or the map the ranger gave us! This was the last thing we needed at 5 pm trying to head into the desert. But the map on the sign clearly showed our destination so we kept going.

Three miles in... shadows were getting longer, the wind was whipping and we hadn't found a spot.  What we thought would be nice desert sand was a floor of chips of rock and prickly scrub. We'd hoped to reach the next junction before choosing our spot but it seemed we'd gone far enough and no sign of an intersecting trail (did we miss a sign?).

It was getting too late.  At 5:45 we chose a spot on a knoll, opting for a nice view over a lower, sheltered area with wind protection (not a smart decision).  The tent threatened to blow away from us as we struggled staking it down.  Heavy rocks were moved onto the stakes and I totally forgot about the guy lines (wondered what those ropes in the stake sack were for!).

It was cold too; out came the down jackets, wind pants, hats and gloves.  We hadn't bothered to get fuel for my Jetboil, instead relying on a solid fuel cook stove.  We know now we should've brought fire starters as lighting the fuel cubes was nearly impossible and only accomplished by building a fort around the thing, and leaning in with hands and heads to break the wind.  It took about 35 minutes to boil water as the flaming cube would die when the wind gusted, needing to be relit.

Sandy and I were trapped in the tent by the weather, going out only to add hot water to our dehydrated dinner and to secure the site for the night. To pass the time, we read the "Accidents" section of AMC's hiking magazine Appalachia - maybe not the best choice of read!

We didn't get much sleep. All night that wind threatened our fly, which remarkably stayed on, however the wind did bend a pole (which I proceeded to break in half trying to fix the next day).  Even the stars didn't cooperate - JT is a designated International Dark Sky Park, with the promise of millions of visible stars on a clear night.  We got up at 3 am, went outside to see and the sky wasn't presenting the stars we'd hoped (maybe the moon was too bright).

Hours later as the sky lightened, the wind held back just a bit, though temps dropped into the 40s.

I went out to attempt to light the stove for coffee and noticed just where we were, way too close to the trail (more like 80 feet, not the 500 feet required).  Oops.  There, peeking around the corner I could see the back of the junction sign!  Not sure how we missed it last night.

Several hikers were coming up the other trail. At least now we knew where we were, though clearly we weren't more than a mile from a trailhead. Rookies!

We packed up as the wind once again started getting hateful.  It was decided we would complete the loop rather than retrace our steps back to the car.

At 9:15 we were back on the trail.  Overall, the trip was pleasant; our packs weighed less as we were carrying less water. A LOT less.  Overnight, the mouthpiece on Sandy's Platypus had leaked and dumped out all but a smidge of water.  I still had a good amount in my Camelbak and since it was a chilly, we felt we could make it okay (there would be a half liter remaining in my pack when we finished).


The hills to our right appear to have signs along the ridge. Actually they're not signs but small Joshua Trees, the shadows of their thin trunks and bristly tops tricking us.

It wasn't long before we reached Lost Horse Mine, an old gold mine. 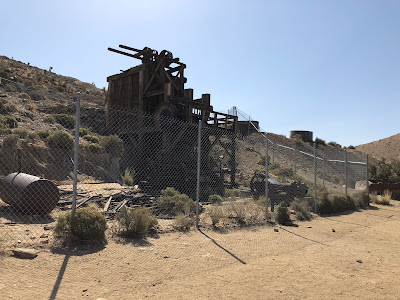 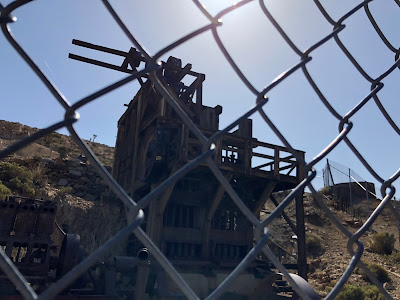 It's pretty cool and we explored for a bit before returning to the trail to complete our loop.


Beyond the mine the loop trail crests then heads left and down, offering a beautiful easterly view of desert hills and basins, then wraps around Lost Horse Mountain. The wind was back to fierce but it was bright and sunny and at least it had warmed up. 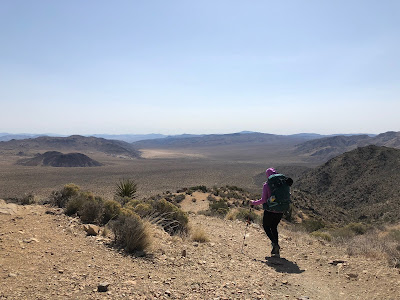 On the map there's a spur to the right that leads up the mountain but we never found it.  Right after we passed the cabin ruins, the path widens to an old road, leading us to a desert wash, the very flat and windy finale of the loop.

The wash consists of a whole lot of scrub and cactus, and it seems to go on forever. And it's VERY windy.  There are several old roads and paths but it's well signed so if you pay attention you'll stay on course. 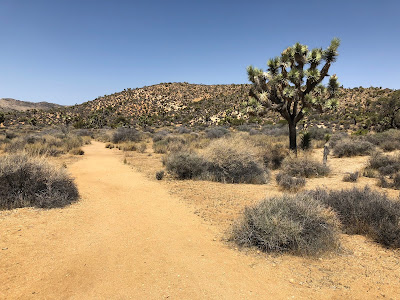 When we saw that the Joshua trees had returned to our surroundings we knew we were close to the Lost Horse Mine parking area.  At the very end the trail turns right but straight ahead we could see the road leading in to the Lost Horse Mine parking lot so we jumped on that and headed out toward Park Boulevard.  It's a long walk back to the main road and when we reached Park Boulevard we were able to catch a ride back to our car (that mileage is included in total miles above).

There was sand in my eyes, ears, teeth -  powdery grit permeated my clothes and pack.  The unrelenting wind beat us down and we weren't look forward to another night backpacking so we made other plans for our second night.  Our goal was to try out our gear on an overnight and we'd accomplished that.

We did enjoy the unusual scenery of the Joshua Tree deserts.

Posted by Peppersass at 10:35 AM No comments: