Trailhead: Trail is located on the Cima Road in Mojave National Preserve, twelve miles south of I-15, and five miles north of Cima, CA. Directly across the street is the White Cross World War 1 Memorial.

Teutonia Peak is situated on Cima Dome, a 1500' rise in the desert floor.  To learn more about Cima Dome visit https://www.nature.nps.gov/geology/usgsnps/mojave/cima1.html.


Hiked with Sandy today. After hiking in Joshua Tree National Park (see previous trip report), we headed to Las Vegas to fly home. Mojave National Preserve is on the way so why not visit?

By the time we left the Kelso Depot Visitor Center it was getting late - too late to really do anything but drive through the preserve. We wanted to get to our hotel at a decent hour to get ready for our early morning flights.  As appealing as the hike to the top of this peak was, we just didn't have the time.

As we passed by the Teutonia Peak trailhead parking we decided to stop and just take a short walk on the flat part of the trail  - about two and a half miles RT.

The trail is almost completely in the sun; a few trees and large rocks provide some shade.  Joshua Trees line the path. These trees are different in appearance from those at Joshua Tree National Park, their trunks appear shorter and bristly branches more bottlebrush-like.


The path intersects with a dirt road.  We crossed the road and a few minutes later found ourselves gently ascending toward the peak.  Sandy wanted to find a viewpoint to take some photos. We hopped off the path to ascend a knoll, which is where we met Jared.  Jared had gone off trail and couldn't find the path to the top.

I could see the main trail further up and wondered how Jared got off track so I started up toward the peak. There are some rocks on the ascent, which never gets steep. Sandy and Jared followed and within fifteen minutes we were at trail's end (which really isn't the summit peak but simply a safe place to end the path).

We looked for a continuation of the trail, perhaps it scrambles up the rocks (it doesn't) and figured the park service staff opted not to encourage visitors to go further.  In fact, looking at Teutonia Peak's ridge from the parking area, the trail ends in a dip to the right of the real bumpy stuff, not coming anywhere near the summit in distance or elevation.


The view is beautiful, unusual, and we took a few minutes to take it in before heading back down. 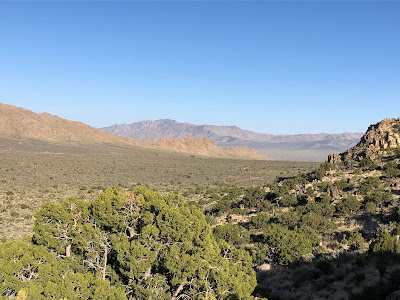 Shadows were lengthening in the desert - and the way the sun hit the dome was incredible. Everything glowed, then melted into a honey-gray tone. 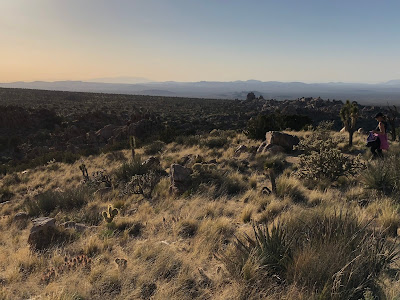 As we headed back to the car I noticed a path on the left and took it.  It leads to an old mine, now covered with fencing for safety. (Click here for more information on the mining history of Mojave.) 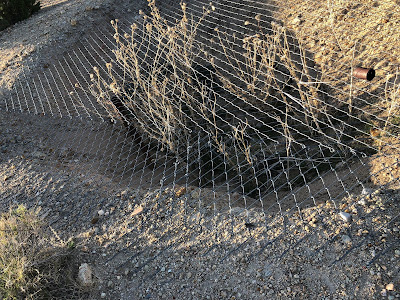 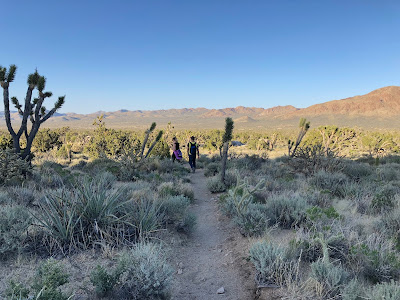 We got to our hotel later than planned but we had no regrets. In fact, we would have if we'd missed it.

Posted by Peppersass at 6:40 AM No comments: