Trailhead: This hike starts at the St. Hubert parking area on Route 73 in St. Huberts, NY.  The parking lot is located 7.5 miles west of exit 30 off I-87; and 3.3 miles east of the Noonmark Diner (in Keene Valley). Parking is on the corner of Ausable Road directly across from Roaring Brook trailhead parking. The lot fills up quickly and parking is not allowed along Ausable Road or at the Ausable Club.  It's a half-mile walk up a small hill to reach Lake Road (and the AMR gate). Walk up Ausable Road and turn left between two tennis courts - the gate is directly ahead.  No dogs or bicycles are allowed.

Hiked with Ed today.  We planned to hike Dial and Nippletop, then get Blake and Colvin the following day.

Sunny and warm, the day held a lot of promise.  We headed up the road toward the tennis courts around 8:15, passed through the gate and started the walk on Lake Road.

Instead of taking the H.G. Leach trail, we decided to hike the loop counterclockwise approaching Nippletop via Elk Pass. We bypassed the Gill Brook trails as well, opting for the Indian Head trail to Fish Hawk Cliffs route. 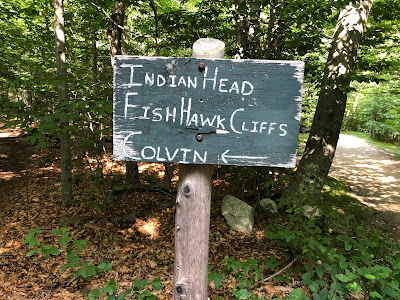 The trail is steep and got our heart rate up very quickly. It was predicted that temps would reach 90° in the valley today and we were feeling it in the woods. Views from Indian Head are breathtaking and after the short, very steep descent to Fish Hawk Cliffs, views there aren't too bad either!


After a few photos we continued on as the trail joined the Gill Brook trail and eventually reached the Mt. Colvin trail.

It seemed like such a long slog. It's rough, rocky, muddy, steeper than we were ready for and we had to stop to rest several times. We were thrilled to see the junction signs. 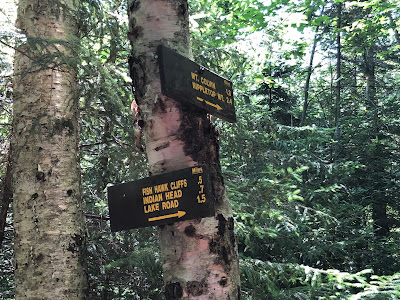 Someone had dropped their backpack on their way to Colvin (and possibly Blake).  I might have suggested we hike these two today instead of Nippletop and Dial but we were so excited to do this loop - it's considered to be such a nice hike... Colvin and Blake? not so much. We continued on toward Nippletop and soon were at Elk Pass.

Elk Pass was a much needed break from the steeps.  We enjoyed the scenery and flat terrain - looks like a great place to camp! 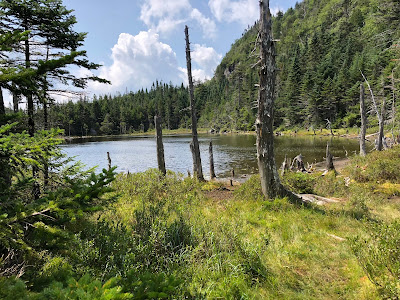 It's just under a mile from Elk Pass to where the trail meets the Dial/Bear Den trail (trail 42) but again the steep terrain is relentless!  An older guy wearing a 46er hat was coming down the trail toward us - looking crisp and cool.  He saw us hot, damp, maybe even looking a bit discouraged and said, "You have a LONG way to go but the summit is just beautiful."  I'm sure he meant well but the "LONG" resonated with us more than the "beautiful." (In fact we spoke of him often during the hike, wondering if he was real or just a hallucination!)

It's not that we were out of shape; we both had some significant hikes under our belts. I guess we expected cooler temps and more pleasurable terrain.  Looking back, if a sweeter path was what we were looking for, the better option would have been to go clockwise, starting up the H.G. Leach trail.

It had been a tough morning and now, well into the afternoon, we still had about 6 miles more to go with some not-so-insignificant elevation gain left to do.  We headed toward Dial Mountain.

Burnside's book emphasizes the steepness if descending the way we came and perhaps that's why a group we met on the summit decided to return the way they came, going back over Dial, Bear Den, Noonmark.  Their decision lulled us into thinking the path before us would be much easier, more doable, with less grousing.

Neither of us wanted to admit how hot and tired we were, how much we'd planned to be farther along the trail at this point in the day.  We trudged over toward Dial, stifling a groan every time we saw the trail head "up."

Dial Mountain came up quickly and without much fanfare. The summit was crowded.

We stayed about.....90 seconds and off we went, anxious by this point to get off this mountain. It was almost 3 pm - we couldn't believe it! 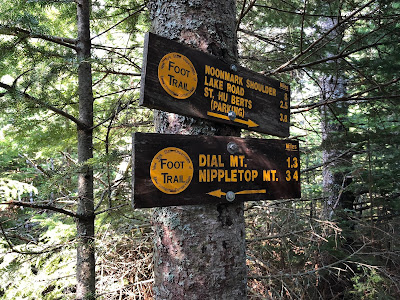 We got to Bear Den and wasted no time heading down.  Soon we were back ascending again - to Noonmark's rocky viewpoint, which is very nice and on another day might be a destination in and of itself. It's a little tricky here on the rock slabs. We searched around for a cairn and found the trail with the sign partially hidden by a tree branch.


Hot, tired, spent and probably dehydrated, we stopped alot to regroup, drink and get a fresher outlook!

As we walked on we gradually saw a change in the forest; we were descending toward the beginning of the H.G. Leach trail.  The Lake Road was a welcome sight and we were silent as we walked to the AMR gate and down to the parking lot.  We finished at 6:30 p.m. too tired to do anything but fall into the car and drive to the Inn.

The Dial-Nippletop loop requires that one climb three smaller peaks to get the two high peaks.  Today was supposed to be a spectacular day in the woods. It was more heat and work than expected.


There are times when we recognize the need to step back from our thoughts. Plans to hike Blake and Colvin the next day were scrapped.  I spent the rest of my week hiking, but I chose lesser peaks, enjoying the trails and the weather.
Posted by Peppersass at 2:52 PM No comments: