Hiked BMS* today. After dropping Rich off at the airport I drove the two-plus hours to Lake Placid.  It was still early (11:30) so I headed to the Scarface trailhead.

This would be my sixth and final Saranac Six peak.  I was excited.


The path starts out flat and soon a clearing reveals railroad tracks.  The trail crosses the tracks and beyond is a rustic bench to honor Scott McKay, who died on this mountain several years ago. 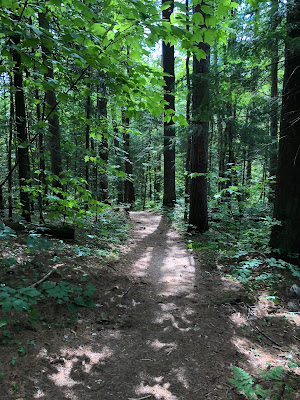 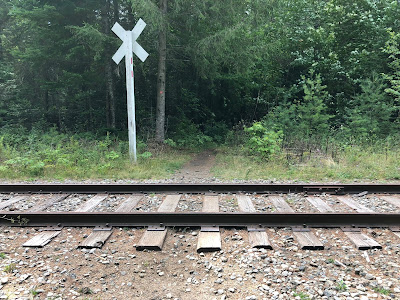 There's no end to the cool things you come upon on this stretch of trail.  To cross Ray Brook there's an elevated bridge. 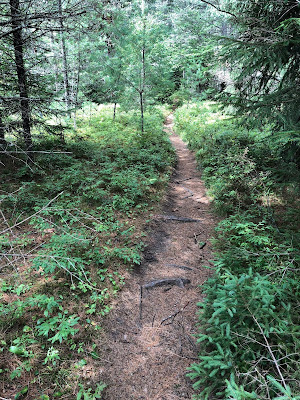 The old foundation is still there about a mile in.  You can see some other stuff strewn about.

At 1.5 miles there's a left turn.  An old road continues straight ahead, don't go there. Much is written about making sure you go left!  There's alot of indication to turn so it wasn't an issue.

I went left onto a path deep with pine needles, soft, inviting.


After the brook crossing things get serious - well, as serious as they are going to get on this sweet hike!

lt's a Sunday afternoon and people are out and about. Still I only met a handful, all friendly, happy.  As the trail rises up there's a lovely view on the ledge. 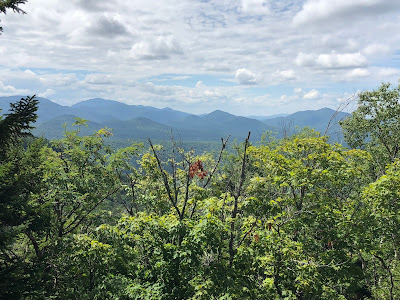 I can see why some only go this far, it's a nice rock for a lunch break: sunny with pretty scenery.

From here the path narrows and meanders.  Many times I wondered which way the trail went. There are discs fortunately but it's subtle up here: no big corridors, just smaller paths.

I wasn't quite sure how long it would be from the viewpoint to the true summit (books says about .6 miles) and kept wondering, is this it? Is this it?

Fortunately I met another hiker who confirmed I hadn't yet reached the summit.  A few minutes later I was on the top, standing in the woods in front of the summit disc. 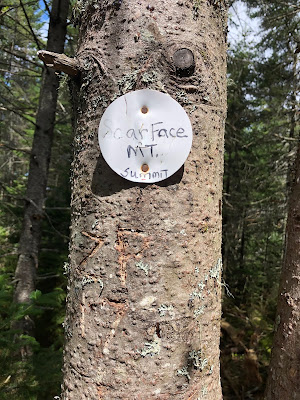 It's not the end of the trail, though.  There's a path that continues just to the right - as you face the summit (I am told there are views over there).

In solitude I grabbed a snack, took some photos then headed down.  Several on their way up also asked the whereabouts of the summit.

Down was easy and fun; the sun was out, a beautiful afternoon to be in the woods.

Excited that I'd completed all of the Saranac Six, I jumped in the car and drove to Saranac Lake to ring the bell at Berkeley Green! 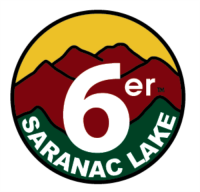 * by myself
Posted by Peppersass at 4:49 PM No comments:

Email ThisBlogThis!Share to TwitterShare to FacebookShare to Pinterest
Labels: Saranac 6

Trailhead: This hike starts at the Jackrabbit trailhead located on Whiteface Inn Lane, Lake Placid. Take NY 86 to Whiteface Inn Lane and drive 1.3 miles to trailhead on the left (just past Lodge Way and Hemlock Way on your right). Parking is along the road.

This is my fifth Saranac Six and the toughest.

Cheated of "high peak" status by a mere 139', the spiteful McKenzie provides a good deal of slippery steeps and interesting scrambles - it's no easy trek!

Hiked with Rich today.  We chose to reach the McKenzie trail via Jackrabbit ski trail as that route is shorter with less elevation gain than the trail that originates from NY 86 near Ray Brook.  And, the Jackrabbit trailhead is about two miles from where we were staying. 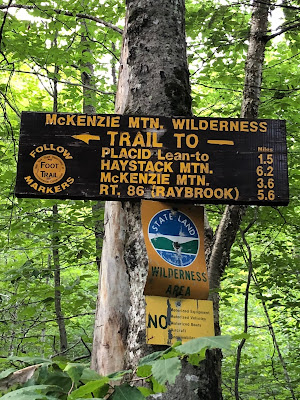 "Private Land" signs pepper the trail. There are a few old roads/driveways with signs warning hikers and skiers to stay on the path and be respectful.  The path climbs gently, a nice warmup for us.  Placid Lean-to is on the right at 1.5 miles.  We stopped here for a few minutes. 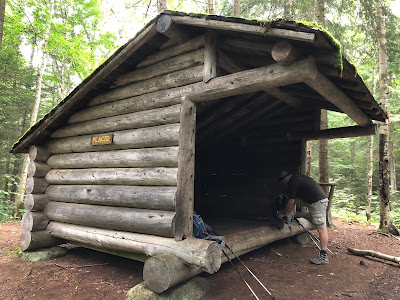 At 1.9 miles you reach the four corners. We knew to go right but it doesn't hurt to double check the signage.


Up we go, ready to tackle this portion of trail (the reason for all the warnings described in various trip reports). We were ready to meet this half mile that would bring us a quick and nasty 1,000' up. 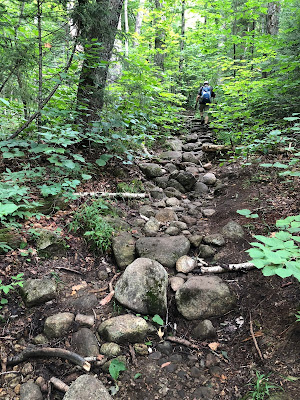 We picked our way through the tough area: scrambles, none which would be terribly technical if not for the erosion.  The trail was wet too, which reduced any sort of traction in dirt and up stripped roots.


It's a long half mile! The mountain seems to know when you've about had enough and the steepness gives way to more even ground.  But it's not done with the torment.

There are five summits, the last one being the true summit (of course!).  A big rock and beautiful view greets you at the first summit (2.6 miles in). It's a side trail on the right; we tried to find the trail there but the main trail's actually a left just before the right. 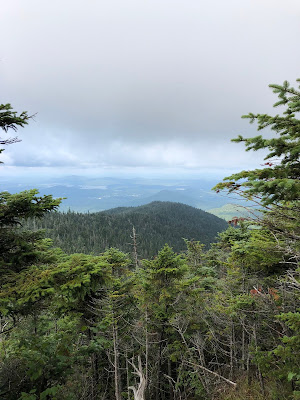 So up then down then up we go, did we just do summit three or was that four?!


Incredible views peek through the thinning treeline. We knew we were close to the true summit after that one scramble that goes up and left, and just a few steps later came upon an oddly shaped ledge, too smooth to get much of a footing particularly if you're short.  Fortunately there's just enough root on top to grab and haul yourself up.

Twenty or so steps past that ledge the path splits, with the left leading to a viewpoint to the northwest. Straight ahead is the summit. 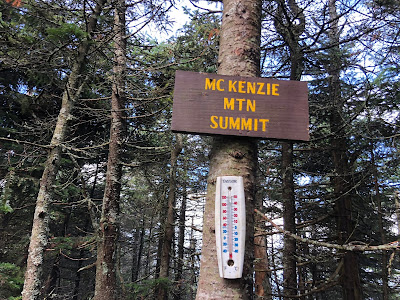 Beer was calling so we didn't linger. The hike down takes just as long as the hike up.  That half mile of gut wrenching steep is a monster trying to descend, especially wet. When it was the safer option we'd use walkarounds  - never recommended (many so overused, too worn to try to walk down) but better than slipping. Our pants got muddy, we fell a few times and I'm not ashamed to have crouched and crawled.

Once the steep was done however, it was smooth sailing back to the car and to Big Slide Brewery for a beer!

Posted by Peppersass at 4:08 AM No comments: