Distance:  3.7 miles (hiking trail up 1.6; mountain road down 2.13)
Elevation gain:  <500'
Directions (courtesy of Stony Burk): Heading north on US41 in L'Anse bear right at the large welcome sign - this is Broad Street (a Subway and the Baraga Visitor Information Center are across the street from one another). Continue on Broad Street for .7 miles to the 4-way stop on Main St. Turn right, (Main St. eventually becomes Skanee Rd.) and drive 13.7 miles to Sawmill Rd. and turn right. Continue on a gravel road for 2.5 miles until you come to the intersection with Roland Creek Rd (aka Roland Lake Rd). Turn right and drive 2 miles to the T-intersection which is Ravine River Road. Turn right and follow this road for about 2 miles (passing a gravel pit), continue on a little further and you will cross a small bridge. Just keep following the road until you come to another T-intersection with a stop sign, then turn right and continue on the last stretch of road to trailhead parking or beyond to the summit parking area.
The roads are well marked with light blue diamond shaped signs and black lettering: "Mt. Arvon." There's a sign for the trailhead on your right about a mile before the summit.
These directions are the simplest way to get to the trailhead (or to drive to the summit). Allow for extra time as many roads are gravel. The road has recently been graded so it should be an easier ride up than in the past.
Hiked with Rich today. The weather was perfect, temps in the 70s, not much wind and just a few bugs. 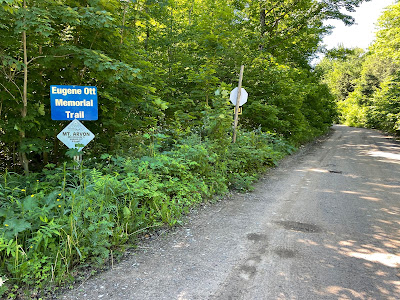 Hiker parking is right at the "Trailhead Parking" sign so we parked our car off to the side and walked up that side road to the beginning of the trail.


The well-marked trail was created in 2017 by a couple of area hiking enthusiasts who worked many hours cutting this path in the woods. In a nutshell, it needs more traffic to soften the rough areas. There are dips and drops and we saw plenty of patches of the dark, recently dug earth associated with a newly forged trail. We regretted leaving our trekking poles in the car.
The beginning of the trail follows a stream as it gently rises toward higher ground. There is a cute waterfall just as the trail moves away from the water and continues up the hill.

We crossed the summit road several times and walked across a few small streams (one muddy section almost took my shoe - I stepped carelessly). The trail parallels the road most of the time - yet we often felt we were deep in the woods.
At the top of a small incline we saw a trail sign indicating the way to be a right. This "right" is a road walk to the parking lot and the summit. I'll admit I was a little disappointed; I'd hoped the trail would bring us right to the summit marker.
The road walk is short and soon we arrived at the empty parking lot. The summit area is a short distance away. 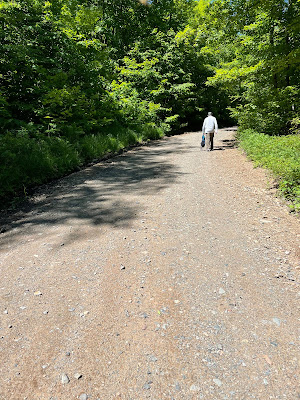 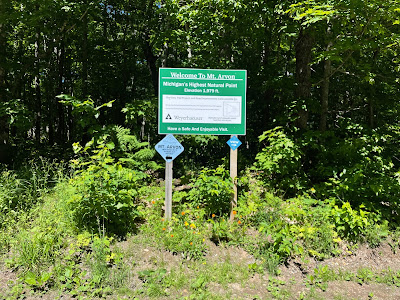 The summit is a small clearing in the woods. We signed the register and took the short walk over to a viewpoint. 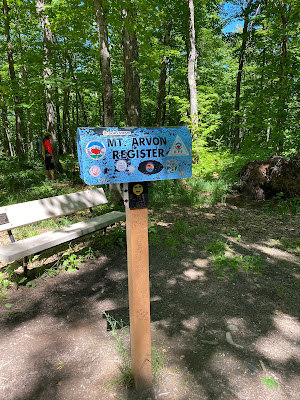 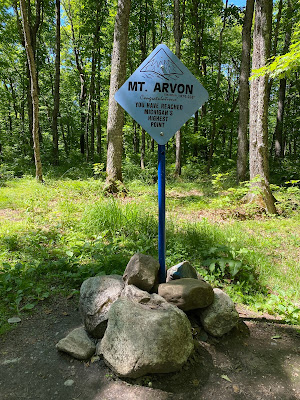 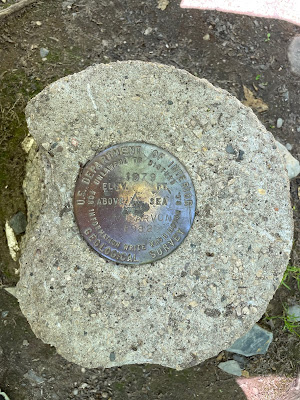 After a few photos we decided to walk the road back to our car. We were back in no time and headed out for lunch.
Highpoint #36 complete!
More information and a trail drawing can be found here.

Posted by Peppersass at 7:16 AM No comments:

Eagle Mountain (2,301') via Eagle Mountain Trail, June 13, 2021.
Distance:  7 miles (RT)
Elevation gain:  900'ish
Directions: The trailhead is located in Grand Marais, MN. (We downloaded directions from googlemaps which brought us right to the parking lot.) From Route MN61, turn onto County Road 4 - aka Caribou Trail - (stay on Route 4 for about 17 miles), turn right onto "The Grade" for 3.8 miles.  Trailhead is on the left, well marked (a compost toilet is located next to the parking lot).
Eagle Mountain is the highest natural point in Minnesota.  Much of the trail is located within the Boundary Waters Canoe Area Wilderness.   Permits are required for day and overnight hikes.  Day hike permits are free and self-issued with blank permits provided at the trailhead.  One copy of the completed permit goes in the box at the kiosk and the other copy must be in the possession of the group. (Overnight hiking is not free and requires a different permit - details provided here.)
Hiked with Rich, Sandy and Joe today. It was a 50 minute drive to the trailhead from our hotel in Two Harbors, so we got to see a bit of the Northern Minnesota shoreline on the way up.  The forecast called for a stormy afternoon.  Our plan was to finish the hike before the rain arrived.

This time of year the bugs are out in force and we were ready with treated clothes, Deet wipes and Picaridin spray.  We doused ourselves and headed to the trail. (Luckily, we encountered VERY FEW bugs on this hike!) 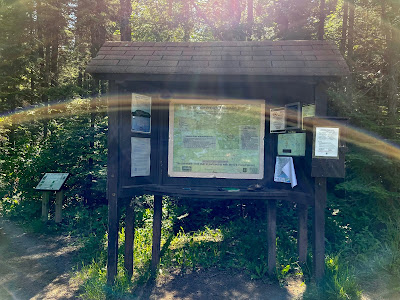 As mentioned, a permit is needed to hike in the Boundary Waters Canoe Area Wilderness. I deposited a copy of our completed permit into the box (on the kiosk), and put the original in my pocket.  There is also a register here so we signed in (and signed out at the end of the hike.) 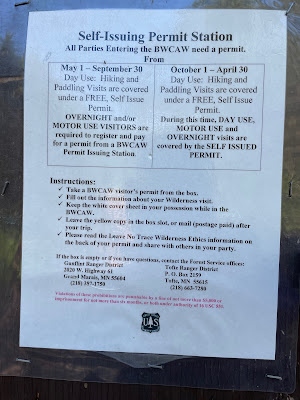 The trail's surface is so varied; smooth paths turn into very rocky, there are boardwalks and bog bridges (some lovely, some sketchy).  It's a gradual increase in elevation, hardly noticeable  - until you pass the lake. 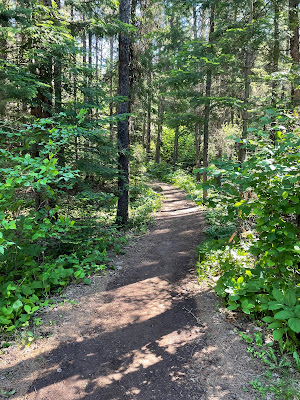 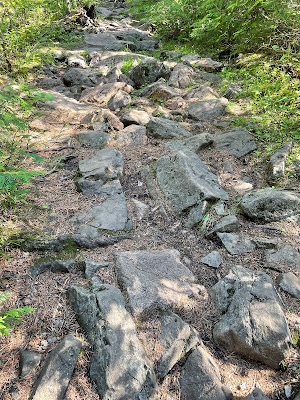 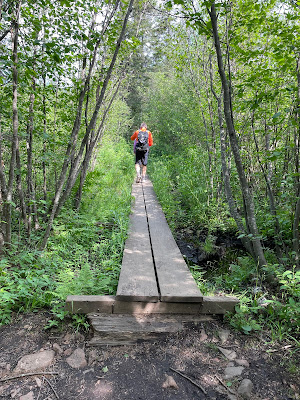 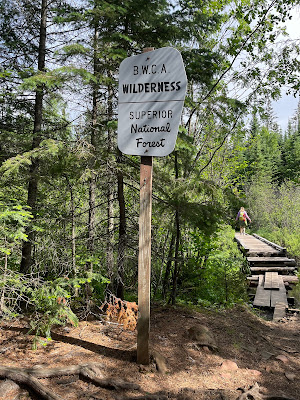 Our surroundings had that wilderness feel; we saw just a handful of others on this trail.  A few miles into our hike we reached Whale Lake.
As we skirted the lake the main trail appears to swing to the right, continuing along the lake's opposite side.  This is a trail junction, where Brule Lake Trail meets Eagle Mountain Trail.  There's a sign here, showing Eagle Mountain Trail continuing as a slight left. Go left.
As you continue on toward Eagle Mountain's summit the path steepens, though never remarkably so.  Several minutes into the climb there's a pleasant overlook with a western view of Minnesota.  From here the path continues up and on to another overlook.

At the second overlook the trail takes a sharp right up a few slabs and through the woods to the summit.  I was busy talking to another highpointer and completely missed this right swing up, and had to traipse through a bit of scrub to reconnect. By now the clouds were rolling in.
The wooded summit is peaceful, subdued.   We took a few photos and headed back down just as it started to sprinkle. 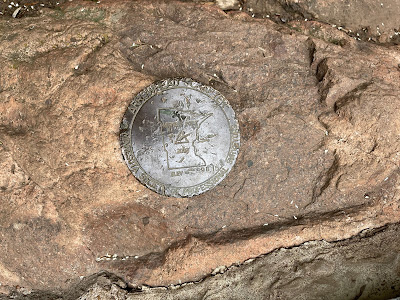 The sprinkle turned into indecisive rain, increasing then waning then starting up again causing us to stop and put on raingear, then take off, then put back on and so on.
We reached the cars, changed out of our wet clothing and headed out to find a place to eat.
We'd passed the Bluefin Grille on the way up and decided to stop for lunch.  Great view!
Highpoint #35 completed!
Posted by Peppersass at 7:23 AM No comments:

Distance:  8.6 miles
Elevation gain:  1,500'
Directions:  Hike begins at Massie Gap, Grayson Highlands State Park, Mouth of Wilson, VA (googlemaps provides directions). Cost to enter the park is currently $7 during the week; $10 on the weekends.  If no attendant is available bring cash or check for the envelope (provided at the toll booth) and deposit in the slot on the door of the booth. Massie Gap parking is 2.7 mile from the entrance (bathrooms at parking). 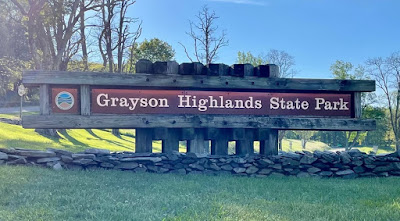 The trailhead's about an hour's drive from our hotel in Abington. Thinking it was going to be crowded on such a perfect day I insisted we get there early and was surprised there were just a few cars in the lot. The trail begins across the field.
The route goes over Wilburn Ridge on the AT and through Rhododendron Gap to a spur trail to the Mt. Rogers summit. 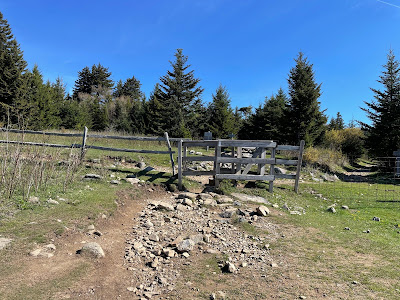 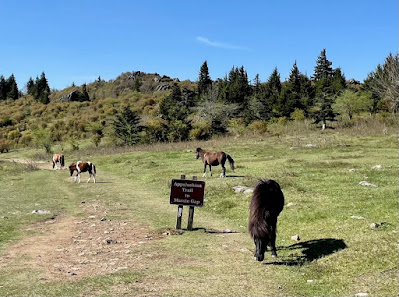 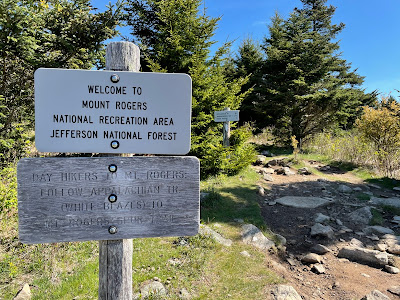 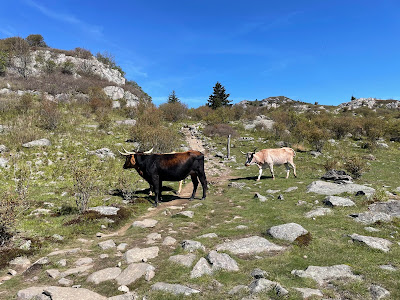 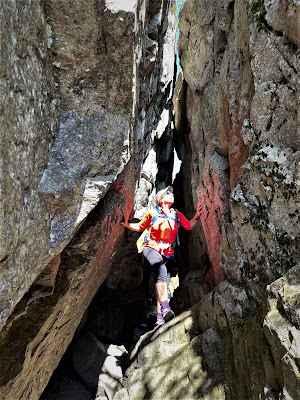 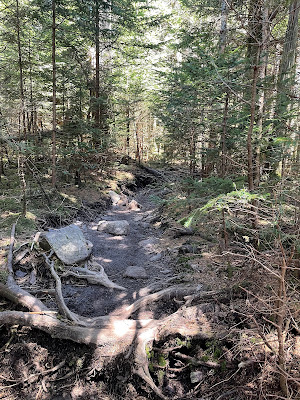 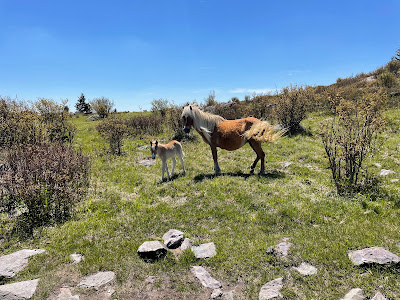 Posted by Peppersass at 3:07 PM No comments: