To access the trailhead via car take a left at the Visitor Center (onto Top of the Falls Road) and then take the second right to a group of parking lots.  Park in the third (and highest) lot.  Trailhead is well signed. 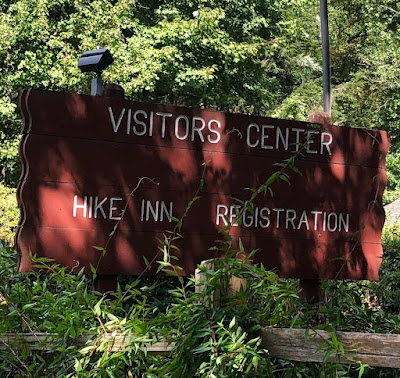 The Appalachian Trail Approach is a 7.3 mile trail that begins at beautiful Amicalola Falls State Park and ends at the summit of Springer Mountain - the Springer Mountain summit marks the start of the AT, a south-to-north 2,192 mile long-distance path. AT hikers can choose to reach Springer via this trail, though not required as it's not part of the AT.

Hiked with Rich today.  I'd been wanting to check out the Len Foote Hike Inn (only accessible on foot) but read that the trail to it is a just a 5-mile-500-feet-gain hike and was looking for a bit more of a workout.  The AT Approach trail runs somewhat parallel to the Len Foote Hike Inn Trail allowing us to combine the trails for a more substantial loop hike.

We planned to walk the loop clockwise, up the AT Approach Trail first thinking it would be a more rugged ascent.

We signed in at the Visitors Center and paid the $5 to park. Some choose to first climb the stairs up the falls before starting up the AT Approach trail. We asked at the info desk and were told by park staff that adding the 604 steps that led from the bottom to the top of the falls before beginning the loop makes for 14 mile mile hike; without the stairs it would be 12. This is incorrect (it's best to do your own research before heading out). We decided against the stairs and headed right to the trailhead.  (If this is your first time to Amicalola Falls, take the stairs - the falls are beautiful!)

Several other hikers were at the trailhead when we arrived.  The beginning of the hike didn't go well for me. Right out the gate I tripped, fell and banged up my knee.  Then a few miles in I lost my sunglasses, the third expensive pair lost in as many years.

Still, it was a good day in the woods! 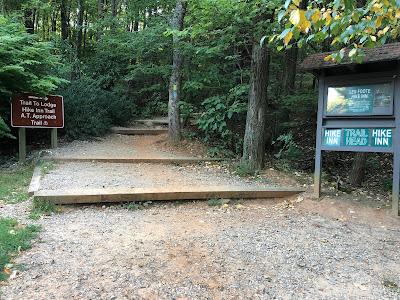 After tripping, I brushed myself off, wiped my bleeding knee and continued on (after all, I still could walk!).  The AT Approach and Len Foote Hike Inn Trails start together for the first five minutes or so, then split off. 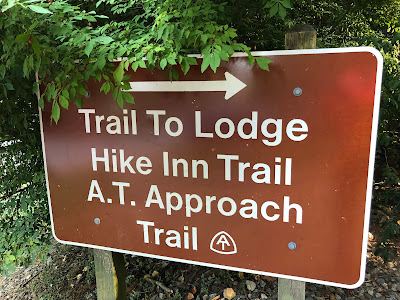 We crossed a road (we'd be crossing several on this loop). 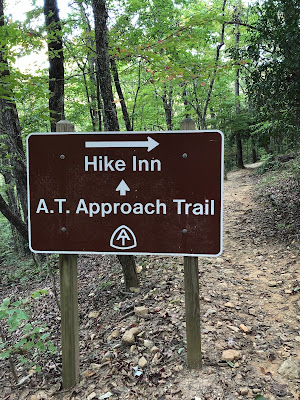 The ascent is so gradual, with many small "ups."  According to the map, we'd been on Amicalola Mountain and the trail appears to visit the summit of Frost Mountain. 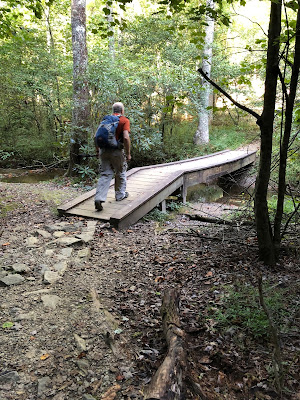 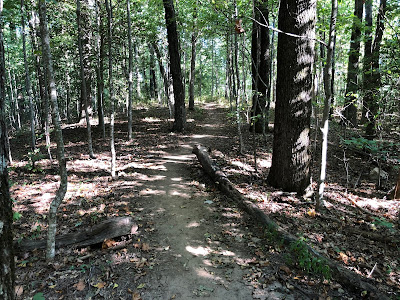 We passed at least eight campsites the first ten minutes into the hike.  My first thought was "if I was starting the AT no way would I be camping the first mile on the Approach Trail." But not everyone wishing to camp is hiking the AT, and southbound AT thru-hikers use these sites for overnight stays after finishing their journeys.

We enjoyed the rooty trail, all of it in the woods (no views). The long stretch of PUDs (pointless ups and downs) continues just over four miles before reaching the Len Foote Hike Inn trail junction. 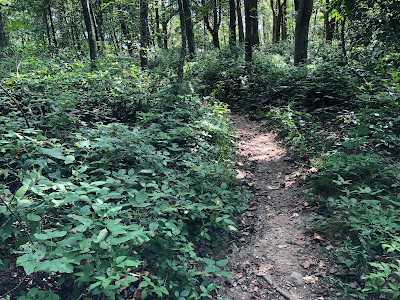 I expected the junction to be very well marked and truly, it would be hard to miss this sign but if you do, you're headed up to Springer!  We turned right and swung east, through lush greenery.

The day was heating up and so was the Galax, a flowering plant whose thick skunk smell permeated the air.  A mile after the junction we reached the Len Foote Hike Inn.  The Inn offers bunks (max is 3 people to a room), dinner, breakfast and lunch.  And showers.  We stopped to eat in the dining hall then headed down the "five-mile-500'-gain" path. 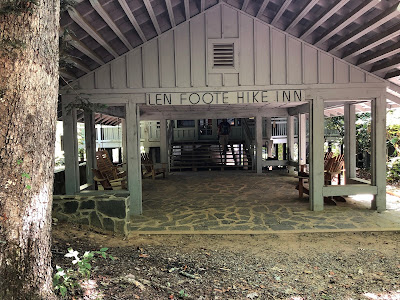 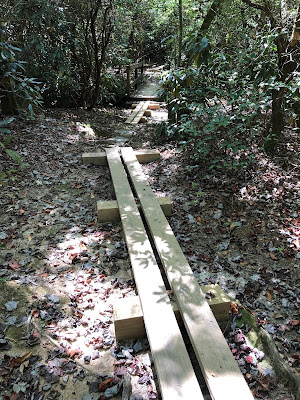 The Inn path wasn't that wimpy. It too had a number of ups and downs.  By the end we were ready to be done and headed for a beer!

After the boots came off we drove back to the Visitor Center to sign out and see if someone turned in my sunglasses.  Behind the visitor Center is the famous arch.

The AT Approach Trail isn't memorable for it's challenge or views, but it was exciting to be walking the path so many travel in anxious anticipation of their first miles, days, weeks and months of such an extraordinary long-distance trail.

We had a beer at Cartecay River Brewing Company afterward.

Posted by Peppersass at 7:37 AM

Email ThisBlogThis!Share to TwitterShare to FacebookShare to Pinterest
Labels: Other fun hikes